Trinamul supporters who were holding a street corner meeting at Watgunj, allegedly got into a scuffle with processionists 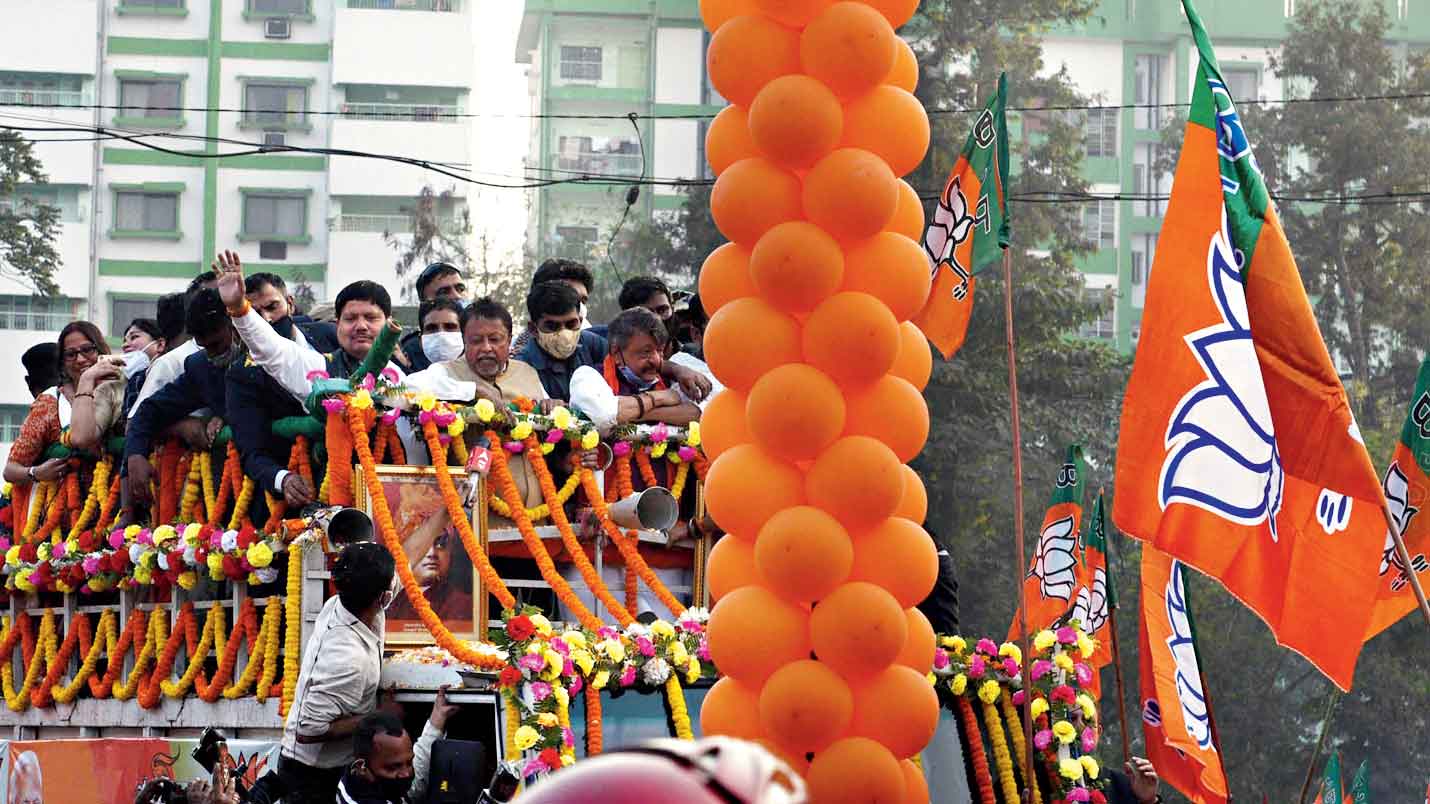 A scuffle broke out between supporters of the BJP and the Trinamul Congress in Calcutta on Monday afternoon after a BJP road show was attacked with stones and shoes.

The BJP alleged that Trinamul supporters who were holding a street corner meeting at Watgunj had stoned the road show which was being led by Kailash Vijayvargiya, Mukul Roy and MP Arjun Singh.

The rally started from Orphangunje at Alipore and ended in front of the BJP office at Hastings.

The stones and the shoes were hurled at the vehicle carrying the BJP leaders, but they missed the target. Soon, the BJP processionists and alleged Trinamul members got into a scuffle.

“Police intervened just in time and the matter ended with stone and shoe pelting and mild skirmishes,” said a BJP insider.

“Since Trinamul has started falling apart, its supporters are venting out their despair through such unruliness,” Bengal BJP chief Dilip Ghosh said. “Just see the law and order in the state. But they cannot stop us like this,” Ghosh added.

The BJP had announced that Trinamul turncoat and former Calcutta mayor Sovan Chatterjee and his associate Baisakhi Banerjee would lead the road show, but they didn’t show up. The stone throwing and the skirmishes helped the BJP divert attention from a major loss of face.

“Thanks to the clash, we can downplay Sovanda and Baisakhi’s absence. The party will create a narrative about how our leaders were manhandled by Trinamul goons to avoid talking about the two,” a BJP state officebearer told this correspondent.

A source said Vijayvargiya had taken Roy and MP Singh to the rally as a last minute substitute.

“Mukulda was supposed to stay at Hastings office today and was not scheduled to turn up for the event. Since, the two people who were supposed to be the focus of the road show didn’t turn up, Kailashji dragged him and Arjunda to the rally,” the BJP source said.

Roy said he had no idea why Chatterjee and Banerjee had stayed away from the rally. “I’ve no idea why they didn’t come,” Roy said.

Chatterjee was recently named the observer for the BJP’s Calcutta zone, while Banerjee has been designated as a coconvenor. Monday’s rally was set to be the first public program of the two leaders since they joined the BJP in August 2019. The party had planned the event as a mega road show.

However, Banerjee had apparently refused to participate in the rally citing personal reasons. Immediately, state BJP leaders changed the event’s agenda in a bid to find a way out of the embarrassment.

“This event wasn’t about one or two leaders. It was a campaign rally with our anti-Trinamul slogan Aar noye awnyay (no more injustice),” a BJP leader said.

According to sources, Banerjee was called from the party’s call centre on Monday morning and was invited to participate in the rally. “The caller had referred to the event as Sovan Chatterjee’s rally which didn’t go down well with Baisakhi and hence she refused to turn up,” a source close to the two leaders said. As soon as it was confirmed that Banerjee would not participate in the rally, BJP leaders were sure that Chatterjee would follow suit.

“The party has its own disciplinary action committee which will look into the matter,” Ghosh said reacting to the absence of the two leaders.

Left Front supporters showed black flags to Union minister of state for finance Anurag Thakur as he was on his way to the GST office at Kasba in Calcutta on Monday.

The protest was organised by the CPM’s Haltu area committee. “We don’t want the rioter Anurag Thakur in our state, in our city,” a participant in the demonstration said.

The CPM has maintained that some of Thakur’s comments had added to the communal flareup in Delhi last year.

Thakur visited former Indian skipper Sourav Ganguly who was admitted to a city hospital to enquire about his health. He also took a jibe at Trinamul’s attempt to tag the BJP as a party of outsiders. “If a minister of the central government is tagged as an outsider, then who is an insider?” Thakur told journalists on Monday.