The company, sources said, has primarily planned to handle around 600-odd containers in a month 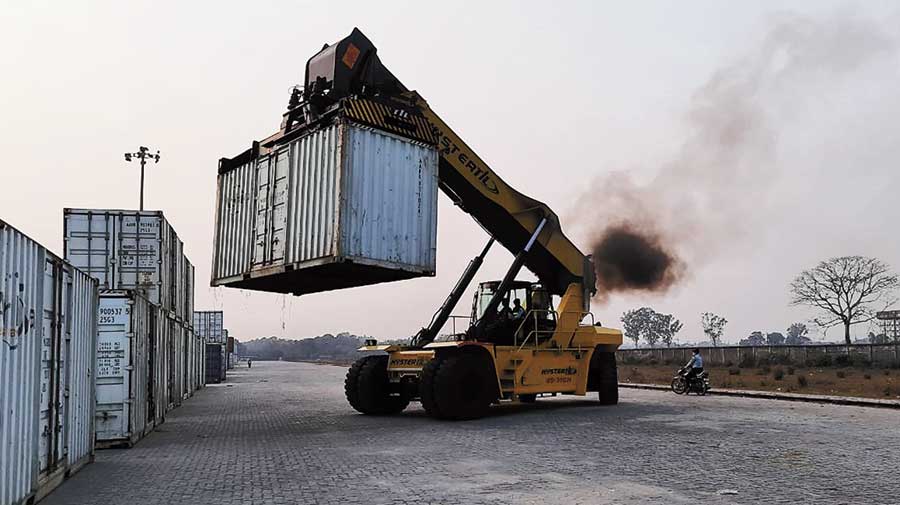 The Inland Container Depot (ICD) or the dry port developed by the Siliguri Jalpaiguri Development Authority (SJDA) — the first of its kind facility for domestic and international cargo movement in the region — is all set to be functional soon.

Set up on a 29-acre-plot that has been taken on lease from the railways by the SJDA, the facility would be run by Pristine Hindustan Infraprojects Private Limited, a company that has been jointly floated by the Pristine Logistics and Hindustan Dockyard.

“The necessary infrastructure is ready at the ICD and we are waiting for a final approval of the Customs which we believe, would be ready in another seven days. We have already conducted a trial run of domestic cargo via rail last month and look forward to develop the facility as a hub for movement of cargo within and beyond the country,” said Amit Kumar, the founder-director of Pristine Logistics.

So far, maximum cargo movement in north Bengal was done via road.

Also, cargo moving to northeast or to the neighbouring countries of Nepal and Bhutan and vice-versa, would mostly move via road through north Bengal and Siliguri.

“But now that we have the facility here, cargo can be directly exported or imported from here via rail, which is a greener way of cargo movement. This would reduce the congestion in Calcutta and Haldia ports. Initially, we will develop the connectivity with these two ports,” added Kumar.

He also mentioned that cargos coming to Nepal and Bhutan from any third country can be brought here via rail and can then be transported to the respective countries.

The company, sources said, has primarily planned to handle around 600-odd containers in a month.

“Usually, 45 containers are carried in a train, which means movement of around 10 to 12 trains in a month. We have laid a two-kilometre long track that connects the ICD with the main track near New Jalpaiguri station. Containers can be loaded and unloaded at the premises itself and can be carried to other places,” said a representative of the company.

Along with two handling railway lines, there is a designated area to handle containers meant for export and import, a Customs warehouse, space for empty containers and a fleet of trailers and ancillary equipment.

The facility can also contribute in export of teas, particularly because the Tea Park – another project by the SJDA – is next to the ICD. A number of tea packaging units are coming up at the site, the company representatives said.

“In a container, around fourteen-and-half tons of tea can be transported. We believe that if commodities are moved via rail, it would reduce the transportation costs by at least 10 to 15 per cent,” they said.

With the ICD getting operational – it was a longstanding demand of the region, members of the business fraternity said it would go in a long way to boost trade in north Bengal and would also encourage fresh investments.

“The ICD would facilitate movement of cargo to any parts of the country and would be of help for the MSME sector, for the pharma sector of the neighbouring state of Sikkim, for the tea industry and also for the horticulture and agriculture sector of the region. Presence of such a logistic facility would surely encourage fresh industrial investments in north Bengal in the coming days,” said Sanjay Tibrewal, vice-chairman of the NB zonal council of Confederation of Indian Industry.