Purna Das Baul had purchased 1.3 acres in late 1970s where recently construction has been done by some unknown people 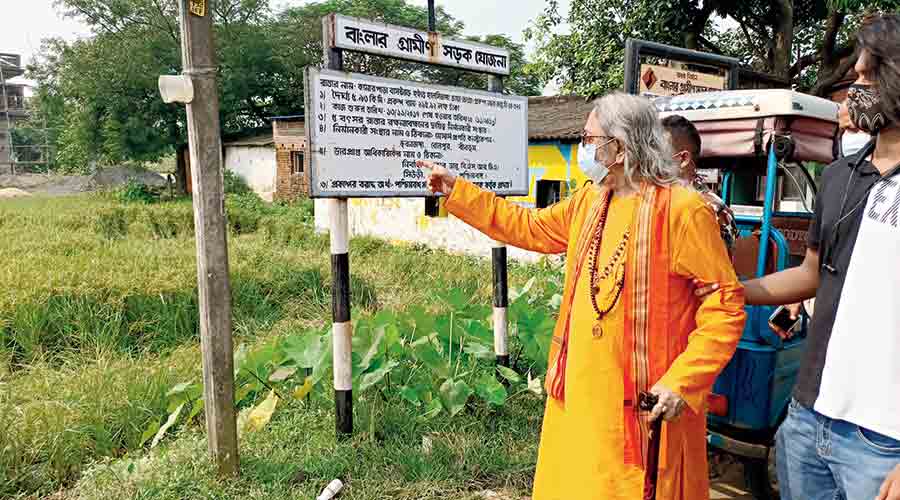 Baul maestro Purna Das Baul and his sons on Friday alleged that 1.3 acres the musician had purchased in late 1970s on the outskirts of Santiniketan have allegedly been encroached upon by a few locals recently.

The artiste, along with one of his three sons Dibyendu Das, came to Kamarpara at Illambazar near Bolpur on Friday to attend an inspection by land department officials to inquire how much of his land had been encroached upon.

“I had purchased four bighas (1.3 acres) of land in 1978 for my three sons. Now, I have come to know that the land has been encroached upon and construction has been done by some unknown people. I have requested the government to help me get back my land,” said the 88-year-old musician.

Sources said Dibyendu had lodged a complaint with the police, block land department and the subdivisional officer of Bolpur accusing a few local persons of encroaching the land his father had bought in the 70s.

“We live in Calcutta and could not visit Santiniketan in the past two years because of the pandemic. During my visit last month, I found at least four structures constructed by encroaching on our land. I also brought my father here for an inspection by the government,” said Dibyendu.

One of the persons, who has built a shop allegedly on the land owned by Purna Das, said: “The land where I have my shop is owned by me and does not belong to the musician.”