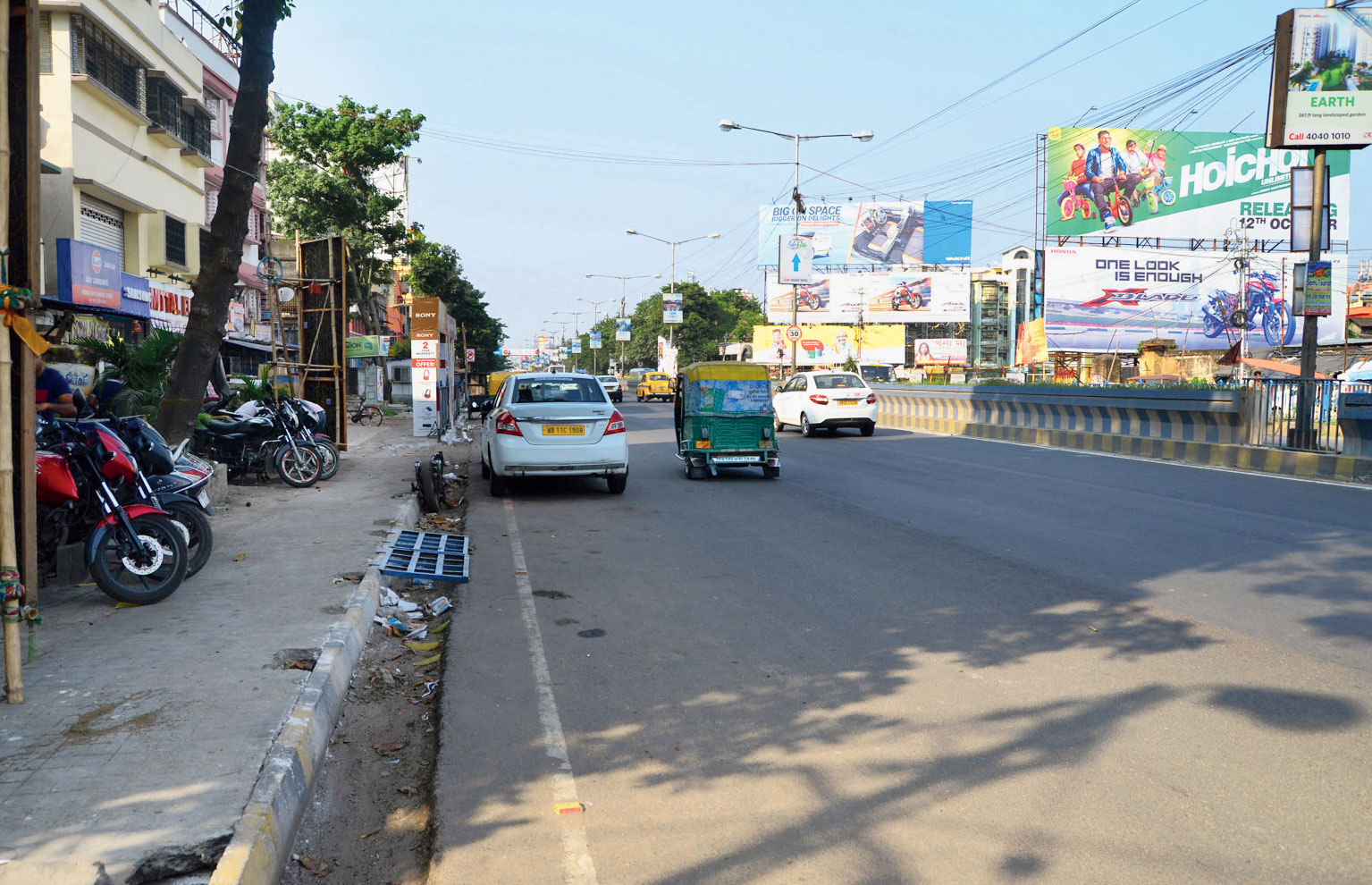 The stretch of BT Road where a woman and her husband were assaulted by group of youths on Dashami night.
Picture by Sanat Kumar Sinha
Our Special Correspondent   |   Calcutta   |   Published 21.10.18, 08:44 PM

Drinking by the roadside, harassment and brawls are a regular occurrence in Baranagar, the BT Road neighbourhood where a woman and her husband were assaulted on Dashami night after they confronted some youths who had allegedly teased her.

Residents of Baranagar’s Mallick Colony, where the couple were assaulted, say local youths and outsiders start drinking by the roadside soon after sunset. Some continue drinking till midnight.

“The drinking dens sprout up behind tea stalls,” said Arindam Dey, a resident of Mallick Colony and a friend of the assaulted couple.

“The boys start shouting once the drinking session is over and often get involved in brawls armed with bamboo sticks. They also pass lewd comments at women.”

Many residents of Mallick Colony echoed Dey’s allegations but said they were too scared to protest fearing attacks on them and their families.

The couple, residents of Bangalore, had visited Dey’s house for dinner and were assaulted on their way back to the house of the husband’s parents in Rathtala, near Dunlop.

One of the attackers, a teenager, was arrested, while seven others fled on seeing a police vehicle. A case under IPC sections 307 (attempt to murder), 326 (voluntarily causing grievous hurt by dangerous weapon) and 34 (common intention) has been slapped on the arrested accused.

“Of the eight attackers, five were not from the locality. We have identified two of the accused — Samrat Pramanik and Saurabh Pal — who are residents of the area. Efforts are on to track them down,” said an officer of Baranagar police station.

The couple, accompanied by two of their friends, Roop and Sonu, had left Dey’s house around 1am on Saturday. The group was travelling in Roop’s car.

Dey said he had planned to accompany the group till BT Road.

The couple and their friends had stopped for a smoke near what used to be Ananya cinema when the gang approached them and passed lewd comments at the woman.

When the husband protested, some members of the gang punched his face. The wife rushed to his rescue but she was assaulted, too, and pushed to the ground.

One of the attackers hit the husband on his neck with a broken tubelight. The attack left him bleeding.

Another gang member threw a brick at the rear windshield of the car. The glass broke and the brick hit Sonu.

Dey said on Sunday the attackers were all drunk and they had also consumed cannabis.

The woman’s husband said: “It was a nightmare, what we went through.... I cannot talk much because of the wound on my neck. The police have not contacted me till Sunday afternoon.”

Speaking about lawlessness in the area, residents said the ghat at the waterbody in Mallick Colony and the adjacent lanes were most unsafe after sundown.

“They drink sitting on the stairs of the ghat. The women of our locality do not dare walk past them.... At times, they leave empty bottles at our doorsteps,” said a resident, who has been living in Mallick Colony for 40 years.

The man in his early 50s alleged that many of the rogues were backed by political leaders. “I had at times thought of going to the police but failed to muster the courage because of their political links. Once they learn from the police that I have lodged a complaint, they sure will take their revenge,” said the resident, who refused to be named for obvious reasons.

Another resident said he had seen many of the rogues grow up in the area. “I dare not speak against them. I have a young daughter at home,” he said.

Told about the allegation of the residents, the officer of Baranagar police station said: “We patrol the area quite often. Several youths spotted drinking in public were picked up. They were later released on bail.”