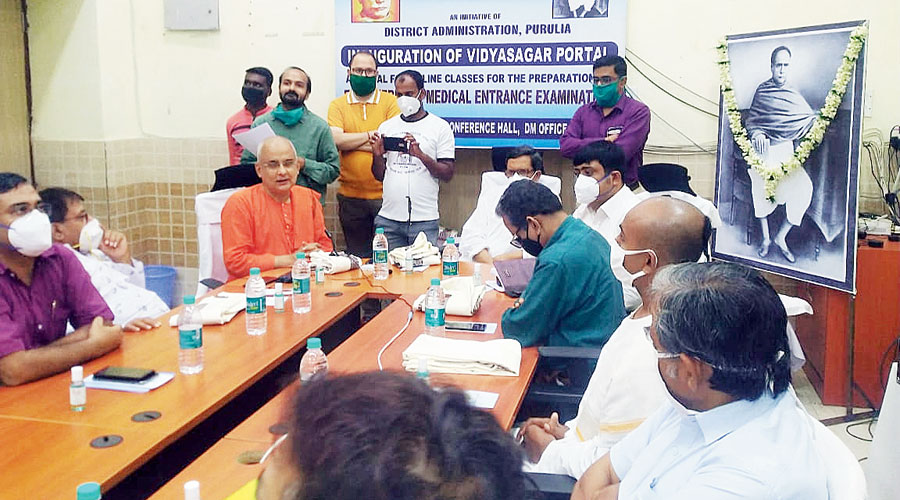 Inauguration of the Vidyasagar portal in Purulia on Saturday
Telegraph picture
Snehamoy Chakraborty   |   Purulia   |   Published 27.09.20, 04:42 AM

The Purulia district administration on Saturday launched an online platform named after Ishwar Chandra Vidyasagar on his bicentenary of his birth to help out medical and engineering aspirants as well as motivate students to study science.

The online platform — https://vidyasagar.puruliya.in — was launched on Saturday to coincide with the 200th birth anniversary of Bengal’s leading social reformer, polymath and educationist.

Sources said the decision to launch the website was taken after officials found that very few students, particularly girls, were opting to study science in the higher secondary level in the district’s schools.

The online platform has been linked to the official site of Purulia district administration. The website will have recorded lectures on science subjects and students can ask questions and clear doubts on visiting the website. They will be able to submit their queries in the chat section of the website.

“Purulia is a district where very few students study science because of lack of infrastructure and proper coaching. Many students, particularly girls, who aspire to study engineering or medical science, fail to clear the entrance test for lack of proper coaching. We, therefore, thought of launching a platform that will address the concern of students. We planned the launch today (Saturday) as it is the birth anniversary of Vidyasagar, a person who fought for women’s education,” said Rahul Majumdar, the Purulia district magistrate.

To run the website, the district administration has formed a core committee comprising 16 science teachers of the Sidho-Kanho-Birsha University and Ramakrishna Mission Vidyapith in Purulia.

“We have already uploaded 63 lectures on the online platform on mathematics, physics, chemistry and biology. We will add 100 more lectures in the first phase and the process will continue. There will be doubt-clearing sessions for students,” said a district official.

Mili Mandi, 18, from Khatanga village, who scored 85 per cent in her higher secondary exam this year and has taken admission to Purulia's Nistarini College to study physics, welcomed the move.

“We struggled to get help in science subjects. This website will be a huge help for future students,” she said.

Purulia is a district where poverty rate is very high and most students can’t afford to buy an Internet pack.

Keeping the problem in mind, the district administration installed free Wi-Fi connections at  Kanyashree Bhavans in each of the district’s 20 blocks. A local cable channel has also been assigned to telecast the lectures.

“We have a Kanyashree Bhavan in each 20 blocks. So, the girls and boys can come there and download the lecture by using free Wi-Fi. In our district most of the families have no ability to buy internet packages,” said a district official.

Swami Shivapradananda, secretary of Ramakrishna Mission Vidyapith in Purulia, who was present at the launch, said: “It is a fact that the number of students studying science in schools and colleges in Purulia is very low. The platform will help the students, mainly girls, study science.”