Probe into crash at bridge site 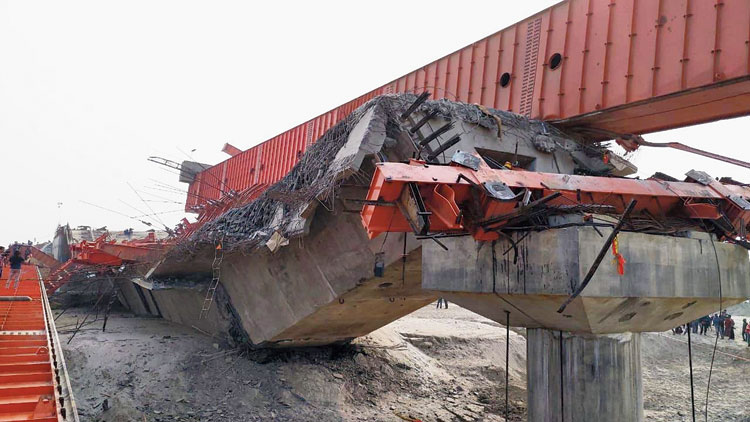 An engineer and a technician were crushed to death and five workers suffered serious injuries when a girder of the second Farakka bridge under construction collapsed on the right bank of the Ganga in Baishnabnagar of Malda district on Sunday night.

Construction agencies and the National Highways Authority of India have ordered separate probes into the crash of the 56m-long concrete plank. Police are waiting for a forensic report to find out the cause of the collapse, said sources.

The deceased are engineer K Srinivas, 40, who was from Andhra Pradesh, and Sachin Pratap, 26, from New Delhi. Pratap was a technician at the project.

Of the five injured, three were treated at the Malda Medical College and Hospital. Two of the three are from Uttar Pradesh and the other from Bihar. Two injured persons have been referred to Calcutta for advanced treatment after their condition deteriorated.

Samiul Sheikh, a resident of Bhangatola village that is near the accident spot, said he had heard a deafening sound around 8.30pm on Sunday. “When we reached the spot, we found that a concrete plank between two pillars had collapsed,” said Sheikh.

A team of the state disaster management department and police rushed to the spot for rescue operation.

The dead and the wounded had suffered injuries mainly on their head and legs.

Uday Singh, the father of Sachin Pratap who also works at the site, alleged some

technicians at the project believed that the design of the bridge was faulty and the matter was communicated to the designers.

“The designers told us that necessary rectification would be done in due course. But as no revised design or a written order had reached us, we went ahead with the approved design. We suspect the incident has happened because of the fault in the design,” Singh said.

But the allegation was summarily rejected by project manager P. Venkatswamy. “Such claims are baseless. He has probably made such remarks out of bereavement. The design had no fault. It was an accident. We have ordered a probe. Also, construction would be kept in abeyance till experts prepare the enquiry report,” said the project manager.

The second Farakka bridge that connects Malda and Murshidabad districts is being constructed jointly by two companies. They are RKEC of south India and CQCE of China.

A road-and-rail bridge over the Ganga with a two-lane road had been commissioned at Farakka in 1975.

The under-construction 5.5km-long four-lane road bridge is coming up downstream the existing bridge. The project by the NHAI had started in January last year and is likely to end by December 2021. The project’s cost is pegged at Rs 516.62 crore.

Altogether 88 pillars are needed for the bridge and most of them are ready. The gap between two pillars is around 56m and the girders are placed on the pillars by a machine called girder launching box (GLB) that also collapsed in the accident.

D.K. Hansaria, the project director of the NHAI in Malda, said the agency was also probing the crash.

Khagen Murmu, the BJP MP of Malda North, went to the spot.

“I would urge the Centre to conduct a high level inquiry,” he said.

Alok Rajoria, the superintendent of police of Malda, along with other senior officers, reached the spot to supervise the rescue operations. He also spoke to some people at the site.