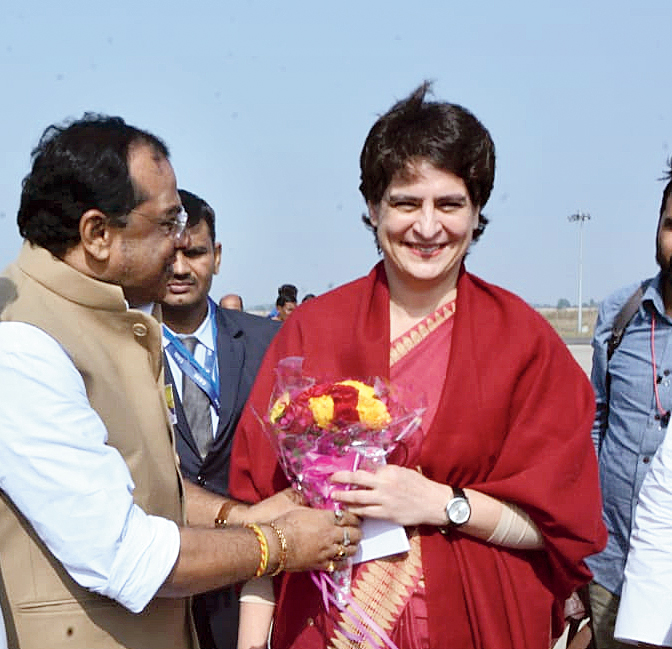 Congress leaders in West Burdwan told their national general-secretary Priyanka Gandhi on Wednesday that people of Bengal were “living in fear” following the passage of the Citizenship (Amendment) Act by Parliament.

Priyanka was on her way to Jharkhand’s Pakur to address a rally for the Assembly polls when the Congress leaders received her during a stopover. Her flight landed at the Kazi Nazrul Islam Greenfield Airport in West Burdwan’s Andal around 12.40pm.

District Congress leaders were present to receive Priyanka and said they had briefed her on the CAA-related situation in the state.

“We had come to receive our beloved leader at the airport. We also told Priyankaji that people of Bengal had been living in fear. They are afraid that they will be driven out of their own country by the BJP-led Centre,” said Tarun Roy, West Burdwan district Congress president.

He said they had urged Priyanka to attend the Congress’s anti-CAA rallies in the state in the near future.

“We told Priyankaji that Bengal has become a volcano from the anger and agony of the people, and the Trinamul Congress-led state government has failed to control the violence,” Roy added.

“She has told us that our party is fighting in Parliament under the leadership of Sonia Gandhi.”

Priyanka and Baghel held a brief discussion at the airport before leaving for Pakur by helicopter.