Former VC Sushanta Dattagupta was removed from the post in February 2016 on charges of irregularities. 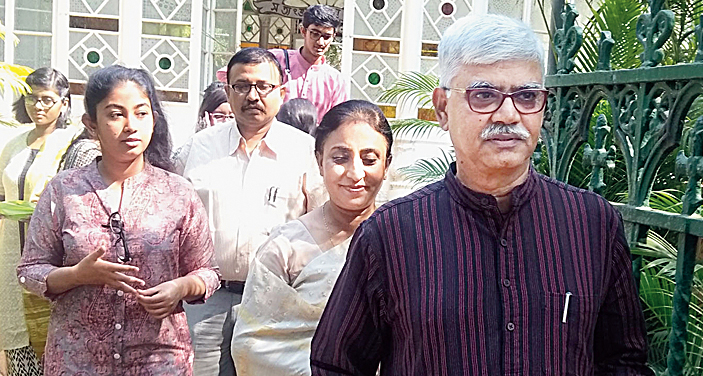 Chakraborty is the permanent VC appointed by the President of the country.

Former VC Sushanta Dattagupta was removed from the post in February 2016 on charges of irregularities.

Chakraborty who was in an academic assignment abroad during the announcement of his appointment, returned to Delhi on Wednesday and reached Santiniketan with his family at Rathindra Atithigriha, the VVIP guesthouse of Visva-Bharati, on Friday morning.

After meeting senior varsity officials, the officiating registrar, Saugata Chatterjee, accompanied him to Upasana Mandir and the Chhatim tree under which Rabindranath Tagore’s father Maharshi Debendranath used to meditate. He also visited Rabindra Bhavana where he offered floral tribute to the chair used by Rabindranath.

Members of the organisations later said they were looking forward to the growth of the university which had apparently stopped during the past two years during the tenure of the previous officiating VCs.

Atanu Sasmal, president of Adhyapak Sabha, a teachers’ body of Visva-Bharati, said: “The recruitment and promotion of the teachers have stopped after the earlier VC was removed. We are hopeful that our new VC will take immediate measures to address these things.”