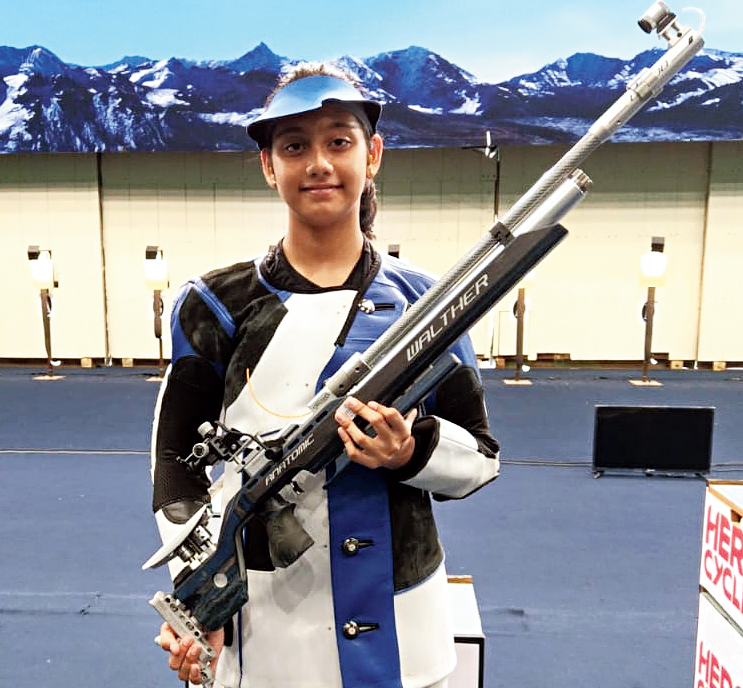 Namrata de was 12 when she first picked up a gun. “I don’t like outdoor games. I like being calm and composed. Shooting is about calmness,” the 14-year-old from New Town said. That made her pick shooting above other options of extra-curricular activities at The Newtown School, where she now studies in Class IX.

Now less than three years down the line, Namrata has won in the junior and become runner-up in the youth category after scoring 624.4 in the national selection trials of the 10m air rifle event in Delhi last month. “This is a commendable achievement at her age and that too in such short time after she took up the sport,” said her coach Joydeep Karmakar, himself a resident of Rishi Eco View, near Eco Park.

Namrata’s good showing is the first step towards qualifying for the national selection camp in the youth or junior category. “If she does well in the forthcoming three or four qualifying tournaments too and manages a high ranking by the year-end, she will make it to the camp from where the India team will be selected for international contests. The rankings are usually announced in January and they take into account the best five scores from six tournaments in 150 days prior to the selection,” Karmakar explained.

Namrata De aiming for a shot
The Telegraph picture

Namrata’s affair with guns and bullets could not have started but for a decision by her father, a Bankura-based businessman, to shift his family to Calcutta when she was in Class II and her sister Adrita barely a year old. The school she was enrolled in opened a shooting range three years back and within months hosted the state inter-school shooting championship. Namrata, who had started taking private lessons by then in Karmakar’s academy housed in the range, raised eyebrows by bagging gold in 10m open sight air rifle in junior and sub-junior girls’ sections.

Even Namrata herself was surprised. “I did not realise I would do so well,” she smiled. Four more stellar showings followed in 2018 — silver in the sub-junior girls’ peep sight category of the same event next year, gold in CBSE Far East Zone Interschool Sports and Games, silver in CBSE All India Interschool Sports and Games and gold in state School Games in under-14 girls air rifle category. The year ended on a high, with her making the cut for the national section trials at the National Shooting Championship Competition, held in Thiruvananthapuram.

Back home after the selection trial in Delhi, Namrata has settled back to her normal routine — wake up at 6am to be ready for the school bus at 7.20am, attend school from 8am to 3pm, rest at home for two hours, come back at the range by 6pm for two hours of practice. “It helps that we stay just 10 minutes away, at Elita Garden Vista, near Shapoorji Pallonji,” said her mother Arpita.

So far, Namrata says she is balancing well between studies and shooting. “Practice is four days a week. I am free on other days.” “Her school is also very supportive. They let her miss classes to attend tournaments,” adds Arpita, who promises to support her daughter’s career in sports even when Board examinations come nearer. “It all depends on what she likes more and is doing well in.”

Ask Namrata and she calmly states that she has no dreams. “I am just going with the flow.”