Advertisement
Home / West-bengal / New trains with a history of snags

New trains with a history of snags 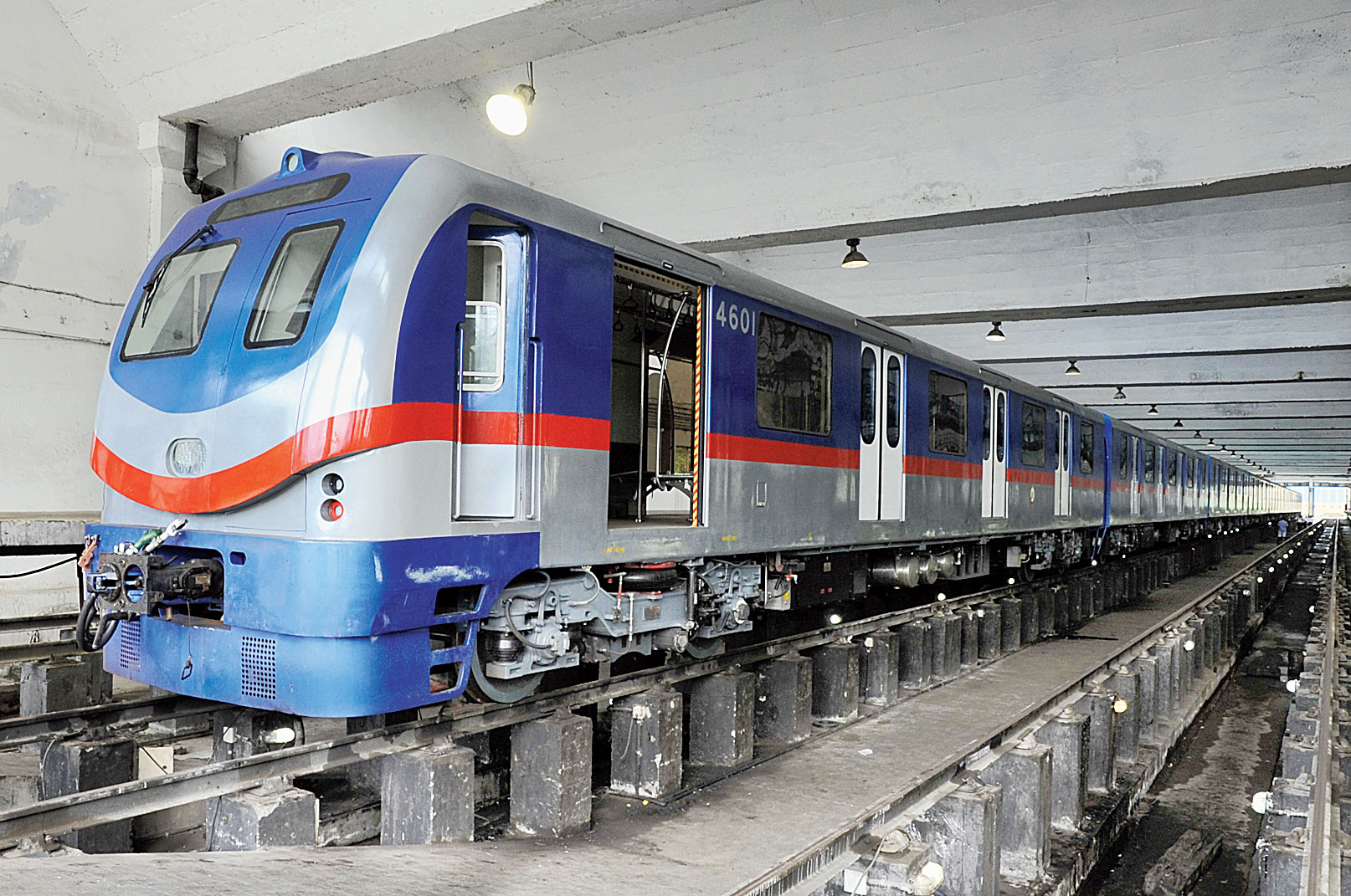 The new trains billed as the future of Calcutta Metro have been riddled with snags before and after starting commercial runs.

The first two rakes from Integral Coach Factory had arrived in July 2017 but had to wait for over two years to start commercial runs in April this year.

The rakes had failed a series of safety tests and had to wait for the Railway Board’s nod for commercial runs.

The rakes had arrived from the ICF factory in Perambur without confirmation of how they would fare on the tracks because the manufacturing unit does not have facilities for a proper trial run.

The ICF, a railways owned manufacturing unit near Chennai, is the biggest supplier to Calcutta Metro. Over the past two years, the unit has sent four more new AC rakes to Calcutta. Three of them are still unused, including one that has been sent back to the Perambur unit for rectification of snags.

From flunking a radio-frequency test to being diagnosed with faulty doors, Metro had reported several times on the problems plaguing these trains.

The first train was pressed into service on April 3. Within a week, it had to be pulled out of operation after water trickled down from the roof of a compartment throughout the day, a problem that has plagued the older coaches as well. 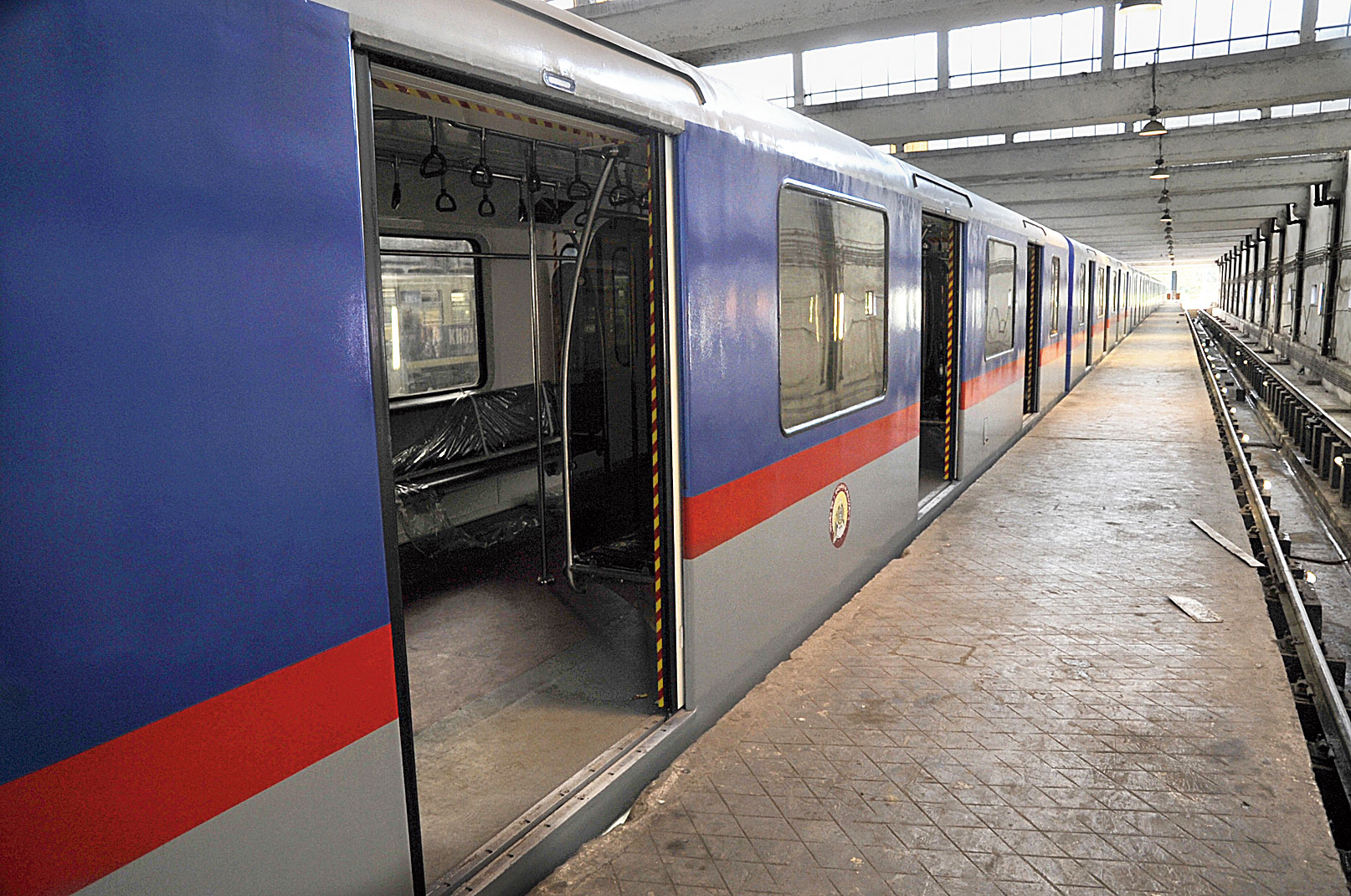 The doors, some of which have been riddled with snags since the trains came from Chennai.
(Telegraph file picture)

The second train that was pressed into service on April 4 was also sent for precautionary checks.

A choked pipe meant to drain out condensed water led to the leakage of water from the ducts, said Metro officials.

A senior Metro official had attributed the leakage to “design defects”, saying that the older AC rakes also suffered from the same problem and it showed that the ICF has not learnt from its past mistakes.

After leaking roofs, the new rakes had a new problem — the doors were not closing smoothly.

The trains were making just one or two commercial trips every day with a team of engineers on board to respond to any problem.

The problems did not pose a safety risk, a senior official had then said. “It is still too early, as the trains have just started commercial runs. But prima facie, the Metro rakes made at the Integral Coach Factory are not up to the mark,” he had said.

The trains still make less than five trips every day.

The snags prompted Metro officials to blame design defects in the trains. They said that ICF rakes are prone to problems because they did not make enough AC trains for Metro services. The ICF supplies AC coaches in bulk to zonal railways. “But we are the only Metro that procures trains from the Perambur unit,” a Metro engineer at the Noapara car shed said.

A spark under the coach left one of the new air-conditioned rakes stranded at Jatin Das Park station for nearly 10 minutes during morning rush hour on May 17.

The Dum Dum-bound train was entering Jatin Das Park station when a Railway Protection Force constable posted on the platform spotted the spark under the second coach, Metro officials said.

An engineer said the problem was with the rake and not the tracks. A valve under the coach came in contact with the third rail, leading to a flash.

On June 11, one of the new air-conditioned rakes was stranded at Sovabazar station following a power failure. 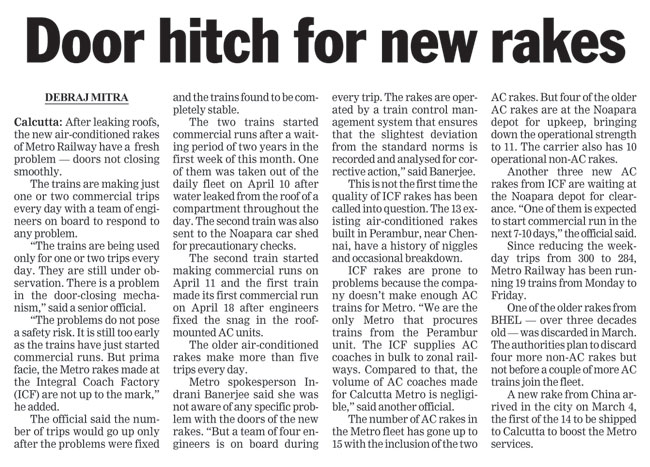 It was a Monday evening and the disruption inconvenienced tens of thousands of passengers for the rest of the evening. A snag in the third rail current collector was behind the failure, a probe revealed.

The Metro authorities had decided to send back at least one rake for rectification to Perambur. But ICF officials sent a team to Calcutta to fix the problems.

In several meetings with the Railway Board officials, Metro officials had complained about the defects in the ICF rakes. The latest of them was in a video-conference with senior Railway Board officials in late June, said Metro sources. Following that video-conference, Manju Gupta, additional member (electrical) of the board, came down to Calcutta and visited the Noapara car shed for a first-hand inspection of the Medha rakes on June 25.

The ICF team that came from Chennai was able to address the issues on all the trains except one. The train was sent to the Perambur unit in the last week of June.

“The scale of the problem was much bigger in the train and needed the first-hand attention of the makers,” said a Metro official.

The Metro officials are now banking on the rakes from Chinese manufacturer Dalian. A new rake from Dalian arrived in the city port on March 4, the first of the 14 to be shipped to Calcutta to boost the Metro services. “The Chinese rake, which is undergoing trial runs, seems superior to those manufactured at the ICF,” an official said.