New date after results of five Assembly elections are announced 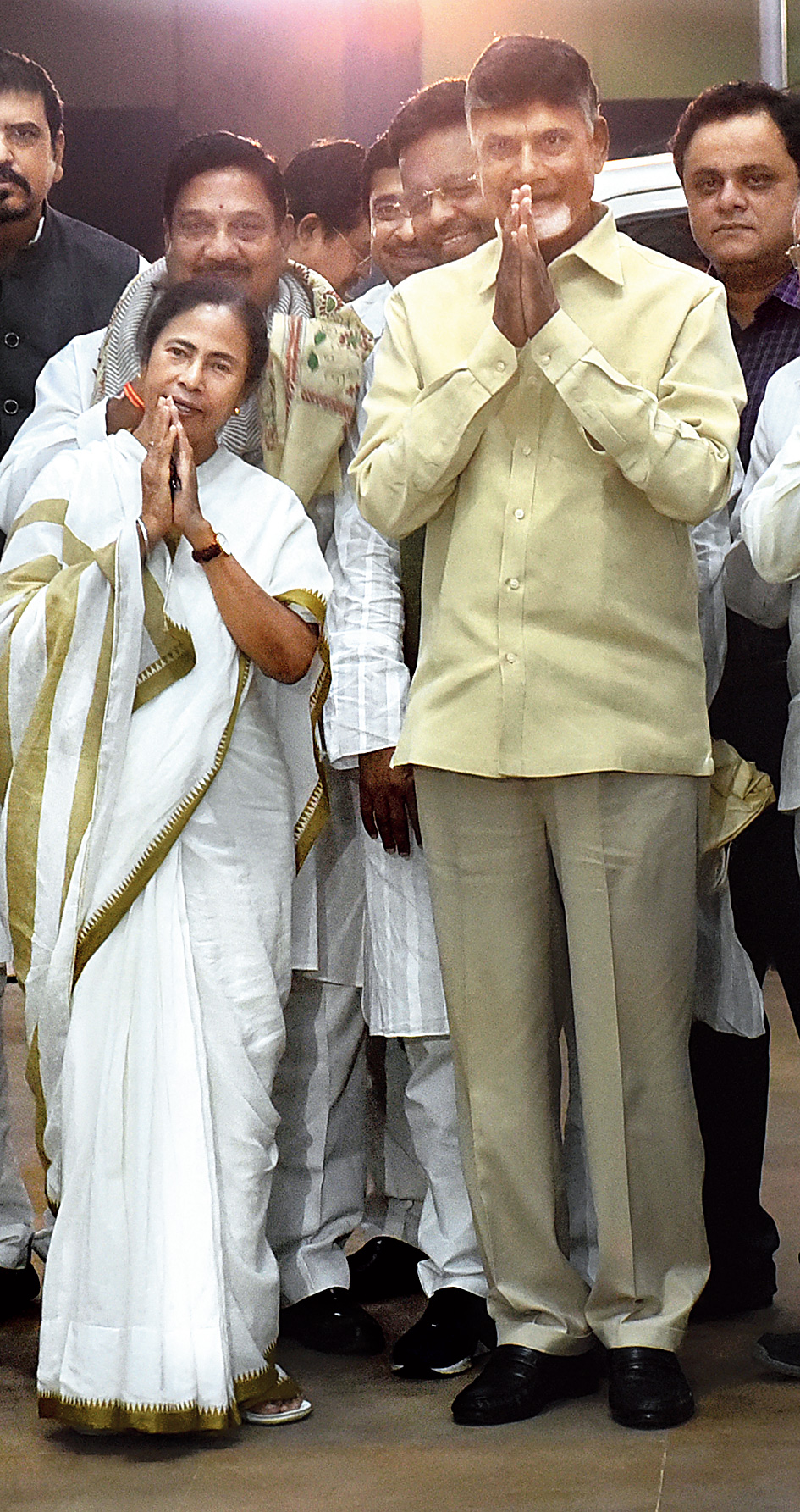 Andhra Pradesh chief minister N. Chandrababu Naidu met his Bengal counterpart Mamata Banerjee here on Monday and announced the postponement of a conclave of anti-BJP parties to mid-December, which would synchronise with results of elections to five Assemblies.

The deferral of the meeting scheduled for Thursday indicates that regional political satraps want to test the waters before finalising the contours of an anti-BJP platform.

TDP leader Naidu was closeted with Trinamul chief Mamata at Nabanna for around 90 minutes in the evening.

Naidu said the new date for the conclave in New Delhi would be announced after the Assembly polls and before the winter session of Parliament begins in mid-December.

The results of the Assembly polls in Rajasthan, Madhya Pradesh, Chhattisgarh, Telangana and Mizoram will be declared on December 11.

“Earlier, we had wanted to meet on November 22. Since everyone will be busy with the elections, we will decide on a later date. We want to make it before the Parliament session,” said the Telugu Desam Party chief.

Naidu announced the decision after an attack on the Narendra Modi government over the way the country was being run, with a stress on its alleged meddling with institutions such as the Reserve Bank of India and the Central Bureau of Investigation.

“All those opposing the BJP will join and discuss. We will chalk out a programme to move forward, take this momentum further, on the agenda to protect the nation,” he said.

During their joint briefing after the meeting, asked who the face of the Opposition’s proposed platform would be, Mamata said “everyone” before Naidu could answer.

“You see, compared to (Prime Minister) Narendra Modi, we are all senior. We have better performance also,” said Naidu.

Sources in her party said the Trinamul chief was unwilling to see a “premature” conclave and prevailed on Naidu to postpone the session for ensuring better participation and to have the benefit of the knowledge of the poll results.

A senior Trinamul leader said Mamata had spoken to several regional political satraps over the past few days to ascertain their stand on the conclave and concluded that Thursday was “bad timing”.

“Many big players were reluctant. Most, including her (Mamata), want to see the election results first,” he said.

“The results will not only tell us where the BJP stands but also what role the Congress can play in the non-BJP platform. While Naidu is in favour of working with the Congress in the driver’s seat, many are not, as of now,” he added.

A Trinamul source said Mamata wanted the likes of the NCP, AAP, SP, BSP, DMK, BJD and the RJD to be part of any such programme and without their representation, she felt the event would work in favour of the BJP.

According to him, Mamata has been working towards wider Opposition unity in the national space since 2016, especially the demonetisation.