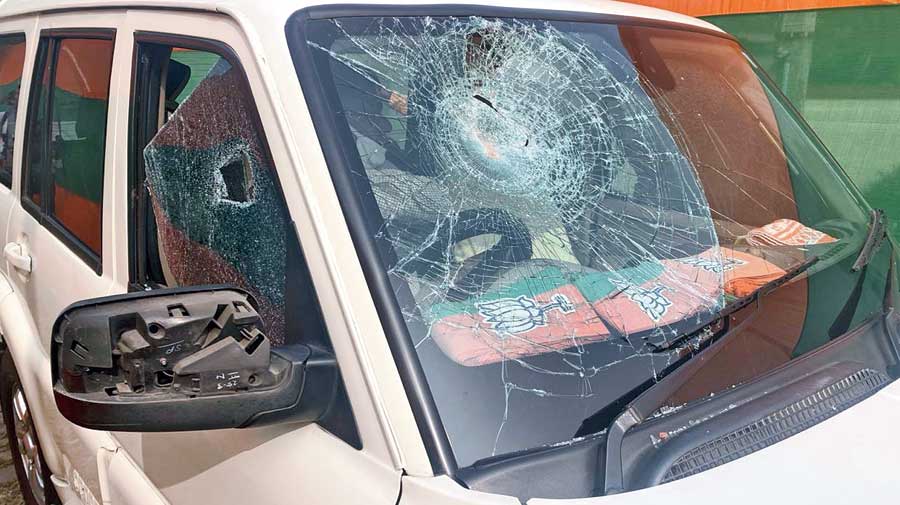 A damaged windscreen of a car in Nadda’s convoy near Diamond Harbour on Thursday.
Telegraph Picture
Our Bureau, Agencies   |   Calcutta/New Delhi   |   Published 12.12.20, 05:39 PM

Two days after the alleged lapses in security during BJP chief JP Nadda’s visit to Bengal, the Ministry of Home Affairs on Saturday unilaterally called in three IPS officers of the state to serve in the central deputation, officials said.

“Three Indian Police Service officers belonging to the West Bengal cadre have been called to serve in central deputation in view of the lapses that allegedly led to the attack on Nadda's convoy in West Bengal,” an official of the home ministry said.

This move is likely to escalate tensions between the Mamata Banerjee-led Trinamul Congress government in Bengal and the BJP-led central government. It follows a Thursday incident, when Nadda’s convoy was attacked on his way to Diamond Harbour, allegedly by TMC “goons”.

“The decision has been taken under the rules governing the all India service officers,” the MHA official said.

Usually, the state government's consent is taken before any all India service officer is called to serve in central deputation.

The three officers are perceived to be close to the present dispensation in West Bengal.

On Friday, the Bengal government decided not to send its secretary and police chief to New Delhi in compliance with Union Home Ministry's order regarding the attack.

Chief Secretary  Alapan Bandopadhyay wrote to Union Home Secretary Ajay Bhalla, saying he has been directed to request the Centre to “dispense with the presence of the state officials” in a December 14 meeting, indicating that he was acting under orders of the state government.

The Union Home Ministry has summoned Bandopadhyay and DGP Virendra on December 14 for an explanation on the law and order situation in the state, following Governor Jagdeep Dhankar’s report on the attack on Nadda.

The police have arrested seven persons, including a BJP leader Rakesh Singh, in relation to the matter.

Three FIRs have been drawn up for allegedly provoking crowds at Shirakol and Debipur on Thursday. The two other FIRs were lodged against “unknown persons”.

Soon after the vandalism, a video footage showing a man resembling Singh urging BJP supporters to attend Shah’s rally with sticks went viral. Singh had said the video had been doctored.

“The FIRs are under different sections of the Indian Penal Code, including rioting and obstructing public servants from discharging public duties,” a police source said while explaining the case related to the attack on Nadda’s convoy.

Senior officers from  the Diamond Harbour district police said four persons had been arrested from Usthi and three others from Falta after the police had lodged suo motu complaints. “We are trying to find out more about the alleged attackers and more arrests are likely,” said a senior officer of the Diamond Harbour police district.

Within an hour of the arrests, the district police bosses submitted a report to the home secretary underlining the arrangements that had been made for Nadda’s public meeting at Diamond Harbour and his journey from Calcutta on Thursday. The report was later handed over to chief minister Mamata Banerjee.

The BJP had claimed at least 17 cars and 127 bikes had been damaged and 35 bikes could not be found in the aftermath of the attack in Shirakol.