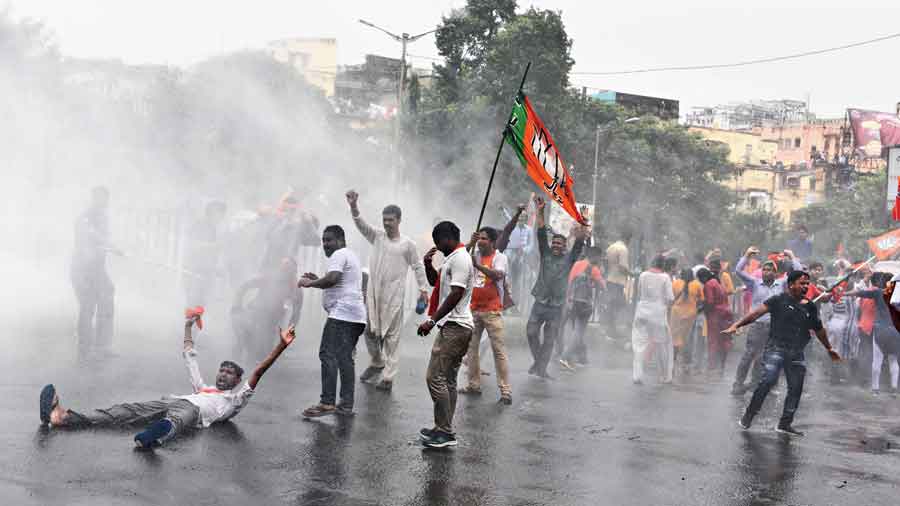 The BJP’s much-hyped march to Nabanna on Tuesday depended on three of its top leaders, who led the processions from three locations.

The Telegraph takes a look at the trio’s activities on Tuesday.

He got out of his Behala residence around 12.30 pm and started towards Santragachhi — the point assigned to him to lead the rally. Adhikari was immediately stopped by police near Alipore police training school, around 10km from his destination, around 12.45pm.

After a short exchange of words with the cops, including a senior IPS officer, he walked into a prison van before raising an alarm for being touched by some police women in civvies.

Adhikari was heard shouting — “Don’t touch my body”. Police officers, however, told him that the force comprised both men and women.

Adhikari, along with Hooghly MP Locket Chatterjee and BJP leader Rahul Sinha, were taken to Lalbazar, the Calcutta police’s headquarters shortly. He sent out a video on social media from the police custody where he asked BJP workers to keep peace in protest as it would continue till the Mamata Banerjee government fell.

He came out of the BJP’s state headquarters at 6 Murlidhar Lane around 1.30pm and led the march from College Square but stopped shortly before the march reached Howrah bridge. After BJP supporters clashed with police and some brickbats flew at the cops, the law enforcers used water cannons. Ghosh, however, sources said, disappeared from the scene once the water-cannon was charged.

Before leaving, Ghosh announced that the march to Nabanna was over and soon returned to his New Town home. He returned to the BJP office to address a news conference.

The BJP state president reached Howrah station in the early hours as he was assigned to head the rally from Howrah Maidan. Majumdar was, however, stopped by police near the Howrah Maidan and sat in protest against the government for using police to stop a spontaneous movement.

A police officer informed him about the decision of his arrest but Majumdar, along with MLA Agnimitra Paul, continued the protest as he demanded that Howrah city police commissioner come to arrest him. However, the police later used force and took him to Shibpur police station.

He complained that the police targeted water cannons specifically at him.

Police sources said in the evening he was released but till late Tuesday evening, he was in the police station as many other party workers were in the custody of the cops.