In Dinhata, Trinamul’s Udayan Guha won by a margin of 164,089 votes — an all-time record for an Assembly seat in the state 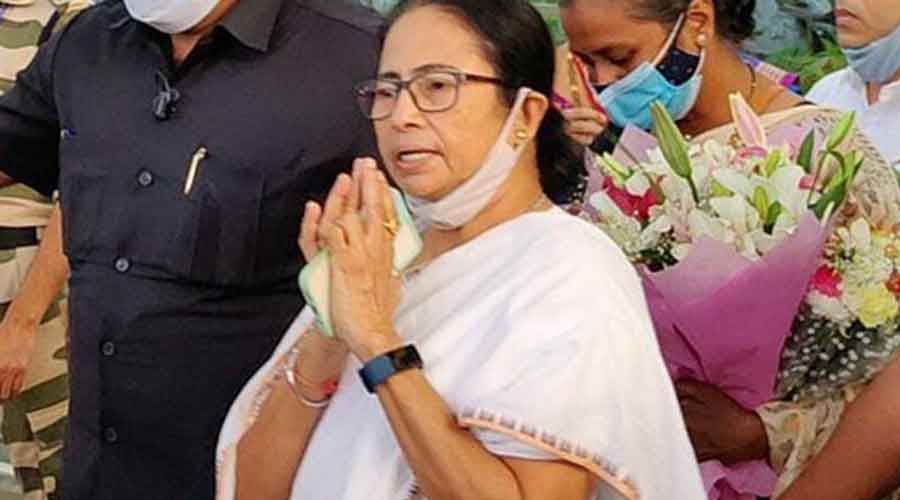 Mamata Banerjee’s party has prevented the BJP from opening its bypoll account by inflicting back-to-back defeats within a month and wresting Dinhata and Santipur the challenger had won in the summer elections.

The icing on the cake came in the form of a record. In Dinhata, Trinamul’s Udayan Guha won by a margin of 164,089 votes — an all-time record for an Assembly seat in Bengal. In Gosaba, Trinamul’s Subrata Mondal won by 143,051 votes. They smashed the record (130,163) set by Trinamul’s Mohammed Abdul Ghani in Sujapur in the summer.

The outcome was so crushing that the BJP candidates forfeited their deposits in three of the four seats. Except in Santipur, the party polled less than one-sixth of the valid votes. (See Page 5)

Some analysts interpreted the results as an outright rejection of Hindutva politics, especially since the BJP had tried hard to make the Durga Puja attacks in Bangladesh an election issue.

Others viewed the outcome as the vindication of Mamata’s focus on a slew of social welfare programmes.

“My heartiest congratulations to all the four winning candidates!” tweeted the Trinamul Congress chief at 1.02pm, by which time the trends were clearly pointing to yet another emphatic sweep for her party.

Trinamul’s tally in the 294-seat Bengal Assembly rose from 213 on May 2 to 217 in exactly six months on Tuesday. The ruling party also enjoys the support of five MLAs who have defected from the BJP and are yet to resign or be disqualified as members of the House, besides that of an Independent MLA from the Gorkha Janmukti Morcha’s Binay Tamang faction.

Mamata said: “This victory is people’s victory, as it shows how Bengal will always choose development and unity over propaganda and hate politics. With people’s blessings, we promise to continue taking Bengal to greater heights.”

It became clearer with the results that the Bengal electorate had found no new incentive in the autumnal bypolls to vote for a party in the Opposition, especially for the BJP that was already dismissed in the election this summer.

“We were fearing exactly this. That is why there was so much resistance from us to the Election Commission of India scheduling these bypolls now. A 0-7 scoreline makes us look horribly bad. More so, as our non-stop claims of the certainty of a 200-plus tally remain vivid in public memory,” admitted a BJP state unit functionary on the condition of anonymity.

“The defeats this time, perhaps, could have still been pitched as respectable had our vote share not nose-dived in six months in all four seats,” he added.

The BJP cried foul and alleged malpractice. But some analysts pointed out that such victory margins could not have been achieved solely on the basis of poll vitiation in this day and age of virtually 24x7 media scrutiny.

“Mamata’s implementation of populist schemes — such as Lakshmir Bhandar, the monthly basic income initiative for women — has had a direct, substantial impact on these bypolls,” said Subhamoy Maitra, a professor of the Indian Statistical Institute.

Psephologist Biswanath Chakraborty said although there was little scope for long-term inferences on the basis of bypolls in a handful of seats, the results indicated further rejection of the saffron camp’s politics of polarisation.

“There remains little doubt that the people have effectively rejected the BJP. This clearly shows that a vast majority of the Bengal’s electorate does not want to repose faith in the party right now. These bypolls indicate, beyond reasonable doubt, a complete rejection of the BJP… an outright dismissal of Hindutva by the masses of Bengal,” said Chakraborty, professor at Rabindra Bharati University.

“Having said that, there was no need for the party (Trinamul) to leave room for the blame of electoral malpractice, which some aspects of these mega margins suggest,” he added.

Some sources in the BJP attributed Trinamul’s triumph to its firm stand against communal polarisation and division of the state.

“Many in our party had assumed that in the wake of the communal unrest in Bangladesh, we will make windfall gains in the bypolls. Our leaders had also tried to utilise it as a key bypoll plank in Bengal. But that, up against Trinamul’s inclusive and pluralistic campaign, did not yield the desired results for us,” said a BJP insider.

“Mamata’s campaign against allowing further division of the state also seems to have worked against us in Dinhata,” he added, referring to the increasing noise of outlandish demands from the saffron camp — yet to come to terms with the summer’s historic rejection by the Bengal electorate — for a trifurcation of the state by culling out parts such as north Bengal and Jungle Mahal that voted in favour of the BJP and giving them separate BJP-led governments.

“The decision by the Centre to extend the BSF’s jurisdiction was also an important issue in Dinhata that did not do us any favours,” the BJP insider said.