Mamata query on Modi’s skip of vote on Citizenship Bill 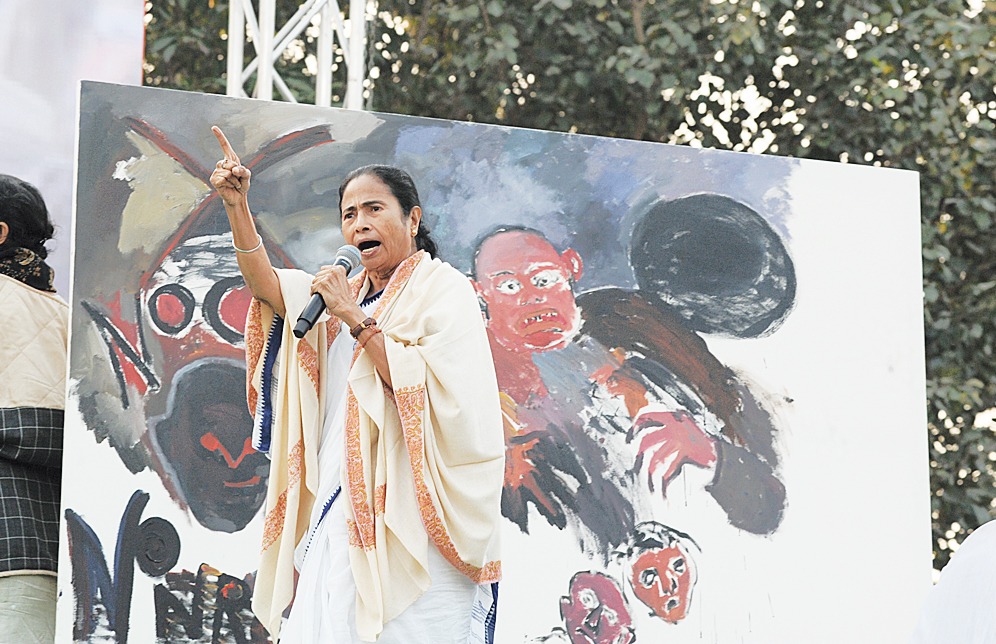 Mamata addresses the rally at Park Circus in Calcutta on Friday.
(Picture sourced by The Telegraph)
Our Special Correspondent   |   Calcutta   |   Published 20.12.19, 10:18 PM

Mamata Banerjee on Friday asked why Prime Minister Narendra Modi hadn’t voted for the Citizenship (Amendment) Bill in the Lok Sabha if he thought the law was “that good”.

The Bengal chief minister has also urged Modi to withdraw the Citizenship (Amendment) Act and the proposed National Register of Citizens as he is “the Prime Minister of the whole nation”.

The Trinamul Congress chief, who led mass protests against the NRC and the CAA for the fifth consecutive day, asked if Modi not voting for the CAB in the Lower House despite being in Delhi meant that he didn’t support it.

“They did not give any time for discussion and deliberation on the CAB (now CAA). Such an important Bill, they passed it at midnight on the very day that they tabled it (in the Lok Sabha). They are misusing their majority in the Lok Sabha. If the CAB is that good, then why did the Prime Minister not vote for it?” she asked at a rally at the Park Circus Maidan in Calcutta.

“The Prime Minister was present.. yet he didn’t vote. That means he doesn’t support this bill. Doesn’t it? Then, withdraw it,” she asked, shortly after announcing protest plans till January 1, promising to keep fighting indefinitely (see box).

The chief minister warned Modi of the ramifications of ignoring popular opinion.

“All of this is a deadly distraction… they think we are weak. That is why they are doing whatever they want. We will not allow that. The time has come… If we fight together, then what can they do? You cannot shoot everyone. You cannot send everyone to jail.”

“It is time the BJP understood that we are all together. We will stand together, fight together and succeed together…. It is they (the BJP) who must prove they are worthy of this nation’s citizenship,” Mamata added.

She warned Modi of the ramifications of ignoring popular opinion. “If you don’t take back the black law and the NRC, you will have to go. Don’t ignore the voice of the people,” she said.

Earlier in the day, she had appealed to Modi to withdraw from the CAA-NRC push without letting ego get in the way.

“I request the Prime Minister.. You aren’t only the BJP’s Prime Minister. You are the Prime Minister of the whole nation. Withdraw the CAA and the NRC…. Listen to the voice of the people. The people have spoken,” Mamata said after a meeting with senior leaders of Trinamul to decide the course of action regarding the protests.

“Sometimes in a democracy, one must bow their head before a mass protest. This is not about victory or defeat, but about the nation and its people. The entire country is ablaze with hurt and rage against the anti-people CAA and NRC… As the Prime Minister, he must take steps to restore normality,” she added.

“Don’t let this become about ego…. You (Modi) don’t even have to bow your head, just say that the CAA stands rejected.”

Asked to respond to the vehement criticism from the BJP of her suggestion on Thursday to hold a “referendum” on the CAA and the NRC under the supervision of the UN, Mamata said she never meant “referendum” when she uttered “gawnovote” in Bengali.

“I meant an opinion poll. I never used the word referendum,” she told the news conference.

“I didn’t say either that the UN should conduct it. I said the UN should monitor it… I have full faith in my country and its people,” Mamata added.

Mamata said she was “shocked” that alleged BJP supporters in lungis and skullcaps had attacked a train in Murshidabad to “mislead” one community about the other.

“I was shocked when I found out.. as soon as I got the alert about BJP men in lungis and skullcaps having attacked a train in Murshidabad and videographing it, I called up police there immediately,” the chief minister told a news conference after a meeting with senior elected representatives of the Trinamul Congress.

“…they told me it is a fact. This is what we have been apprehensive of, as I have been saying in public. You can imagine how low they (the BJP) can stoop to set Bengal ablaze,” she said, adding the law would take its own course. “These BJP men, people from one community, committed the crime to mislead the people and the police about another community. They were arrested.”

On Friday, the Lalbagh additional chief judicial magistrate’s court remanded Abhishek Sarkar, 21, and Prabhakar Saha, 22, in five days’ police custody and sent three minors to jail for 14 days. They were accused of throwing stones at a Sealdah-bound trial engine at Radhamadhabtala village in Murshidabad. Each of them was in lungi and skullcap.

Mamata has said people need to understand the “true nature” of the saffron camp’s propaganda, especially in the current context of the CAA-NRC narrative.

“The BJP is circulating fake videos to provoke people. Don’t step into their trap…. The BJP really needs to understand we are together. We will fight together and succeed together,” she said.

Mamata Banerjee on Friday announced the schedule of more protests in Bengal till January 1. She will later announce the protest programmes from January 2.