Mamata Banerjee thanks people of Bengal on victory anniversary 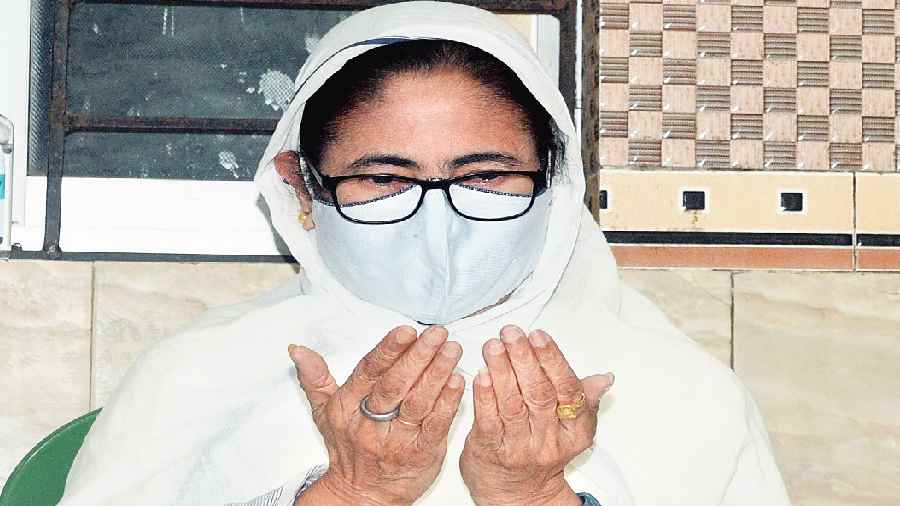 Mamata Banerjee at Sola Ana Masjid in Ekbalpore, Calcutta, on Monday, a day before Id
Sourced by The Telegraph
Snehamoy Chakraborty   |   Calcutta   |   Published 03.05.22, 01:50 AM

Chief minister Mamata Banerjee on Monday thanked the people of Bengal for the massive victory they had handed the Trinamul Congress in the Assembly polls whose results had been announced on May 2 last year.

In a series of tweets, the chief minister said the Trinamul Congress’s landslide victory symbolised the victory of democratic forces against the “high-and-mighty”, implying the BJP.

The BJP hit the roads in Calcutta on Monday, demanding restoration of democracy in the state and highlighting the violence following the declaration of the results in 2021.

“I am ever grateful to our Ma-Mati-Manush for having shown to the high and mighty, last year on this day, the indomitable courage of Bengal. Our people showed to the world that there is no bigger a power than the power of people in a democracy. Our commitment to true nation building should continue, for there are many more battles to be fought together and won together,” Mamata tweeted on Monday and dedicated the day to Ma-Mati-Manush.

She urged the people to celebrate the day as Ma-Mati-Manush diwas.

The Mamata government has decided to celebrate the triumph in last year’s Assembly polls and mark the 11th anniversary of the administration with a fortnight-long celebration from May 5.

Sources in Trinamul said Mamata wanted to remind the people and BJP leaders, who are trying to mount an attack on her government for the alleged lawlessness in the state, that the saffron camp, along with their mighty leaders like Narendra Modi and Amit Shah, about the power in a democracy.

“The BJP can find issues and attack Trinamul but they can’t deny that they failed to gain the faith of people of Bengal as they had been rejected just a year ago. The organisation of the BJP has been affected and they are trying their best to stitch together their leaders and party workers belonging to several factions,” said a Trinamul leader in Calcutta.

Shah is set to reach Calcutta on May 4, a day before Mamata kickstarts the fortnight-long celebrations. He will attend rallies in north and south during the three-day trip.

On Monday, the BJP took out a rally in Calcutta demanding restoration of democracy followed by a party meeting headed by senior leaders such as leader of Opposition Suvendu Adhikari and state BJP president Sukanta Majumdar.