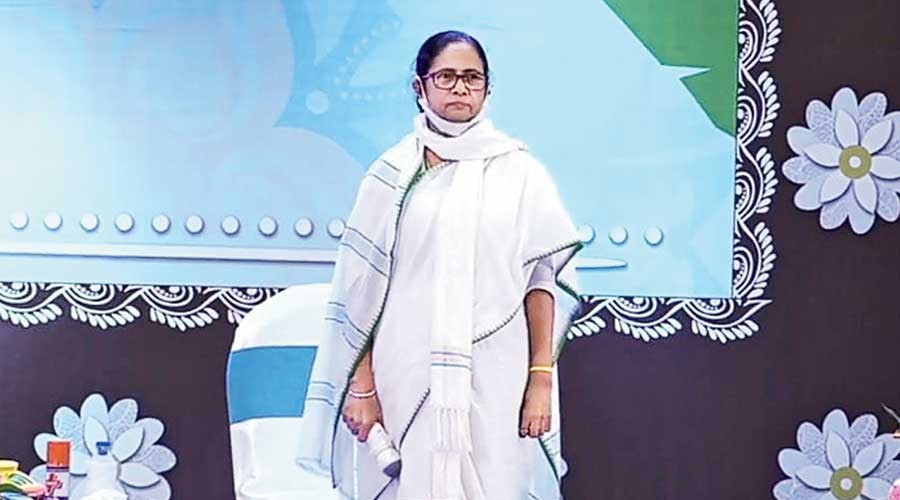 Mamata during the virtual inauguration of Pujas from Nabanna on Wednesday.
Telegraph picture
Snehamoy Chakraborty   |   Calcutta   |   Published 15.10.20, 04:05 AM

Mamata Banerjee on Wednesday virtually inaugurated from Nabanna 69 Durga Pujas in all eight north Bengal districts and Murshidabad and Nadia districts and the chief minister is slated to open around 90 more Pujas in other parts of the state on Thursday.

This is a marked departure from Mamata’s practice of launching only big-ticket Pujas in and immediately around Calcutta, which sources in the Trinamul Congress attributed to both the compulsions of enhancing mass connect and the opportunity presented by the virtual inaugurations.

The sources said the e-inaugurations, necessitated by the new-normal of Covid-19, came as a blessing in disguise as remote districts found some recognition in the process.

“Although there were thousands of requests from various districts, every year, the chief minister used to devote her time to the city for the festival. This time, however, since the inauguration process is largely virtual, the districts are getting to have some big-ticket Pujas inaugurated by her,” said a Trinamul Rajya Sabha member.

Puja activities have been part of Mamata’s autumnal routine in a big way since her stint as the railways minister in the UPA II regime, when her ascent to power in Bengal was deemed a foregone conclusion. 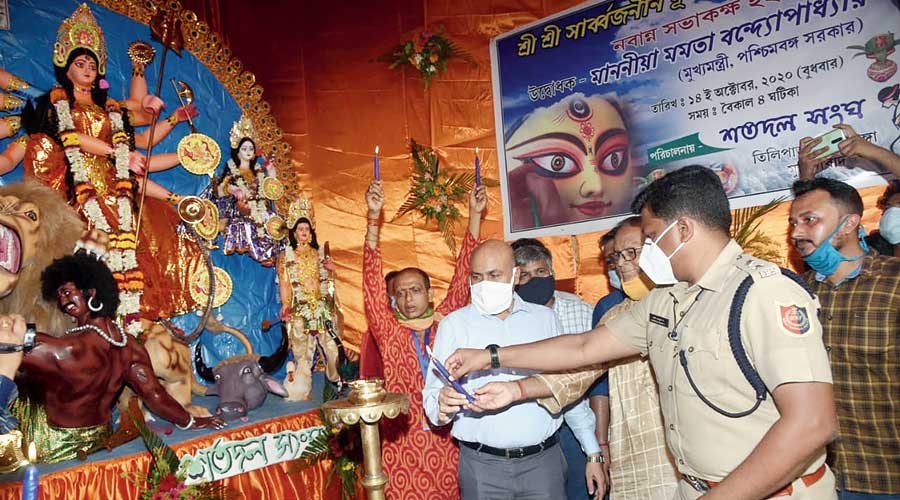 Senior officials at a Puja launched by the chief minister at Behrampore.
Alamgir Hossain

Most big-ticket Pujas in the city and its surrounding areas are conducted by heavyweight leaders of the Trinamul Congress.

Inaugurating some of the 69 pujas on Wednesday, Mamata said: “Your Pujas in rural Bengal attract us a great deal.”

“I have always been meaning to witness those Pujas and hope to see many, virtually, this time. Although I am with you virtually, my heart has reached your pandals, the streets of your districts,” she added.

Trinamul sources said the decision to include the Pujas from the districts was a “very smart move” and it would help the party connect better with the people outside Calcutta — also North 24-Parganas and South 24-Parganas — this year, as the Pujas for inauguration had been carefully chosen to represent various subdivisions and blocks.

“It was a longstanding demand from the people of the districts — especially north Bengal — for inauguration of their Pujas by the chief minister. But she had such a packed schedule every autumn that she barely got time to inaugurate 70-odd Pujas in and around the city, which were picked from over 10,000 invites. This time, the virtual platform presented a new opportunity and she grabbed it with both hands,” said a senior Trinamul leader.