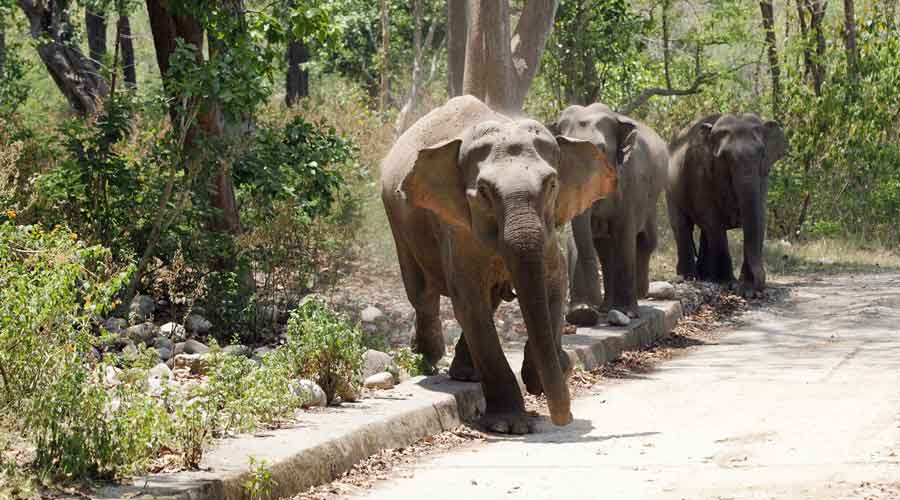 Increasing attacks by elephants have worried the government as around 30 people died in the Jungle Mahal this year.
Snehamoy Chakraborty   |   Calcutta   |   Published 24.11.22, 05:20 AM

Chief minister over ‘insult’ Mamata Banerjee on Wednesday expressed her concern about the increase in the number of elephant attacks and human-animal conflicts and asked the forest department to ensure that family members of those killed in animal attacks got compensation of Rs 5 lakh as well as government jobs.

Mamata said she would visit Hingalganj in the Sunderbans on November 29 to worship nature. The move comes against the backdrop of several people losing their lives in attacks by elephants and tigers.

“The number of elephants has increased in the forests. I will go to Hingalganj on November 29 to worship nature,” Mamata said in the Assembly, directing forest minister Jyotipriyo Mallick to ensure proper compensation and jobs to family members of those who died in attacks.

Sources said the state government had taken multiple steps to woo residents of forests, especially in the Jungle Mahal and the Sunderbans, at a time when a large number of people died in wild animal attacks. Most of these deaths happened when people ventured into the jungle in search of livelihood.

“I heard that a few cases related to compensation for attacks by wild animals are pending. You have to ensure that all should get it in a proper way,” Mamata said during the distribution of pattas to landless people at Netaji Indoor Stadium here.

Increasing attacks by elephants have worried the government as around 30 people died in the Jungle Mahal this year. Several of these deaths took place in towns like Jhargram.

Bengal foresters had drawn up several plans to ward off elephants to avoid human-animal conflicts in the Jungle Mahal in recent days.  Sources in the forest department said there were around 200 elephants in the four Jungle Mahal districts and most of them had come very close to human habitats.

Forest officers corroborated the chief minister’s claim that the number of elephants had increased in the Jungle Mahal in the past few years because of a lack of food sources in the forests of neighbouring states. “Animals that came from neighbouring states like Jharkhand and Odisha stayed on for long to feast on crops in the field,” said a senior forester.

A source in the forest department said Mamata may announce some new benefits for the family members of those who were killed by tigers.

“There are only reports of around five deaths in tiger attacks in the Sunderbans but unofficially, it would be manifold. The kin of those who entered the core areas of the Sunderbans illegally and were killed by tigers are not given compensation. We hope the chief minister will announce something for them,” a source in the forest department said.