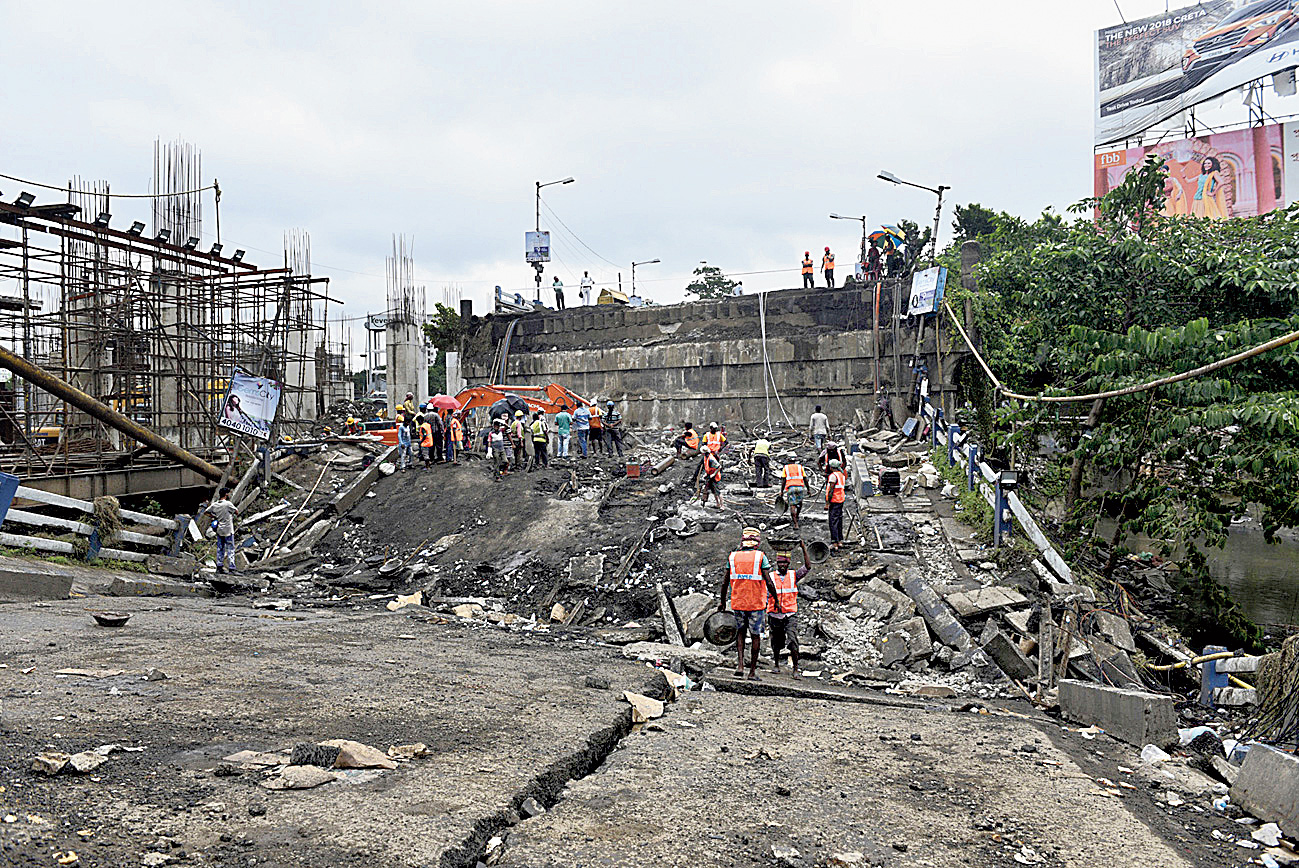 The clock won’t start ticking on the deadline of 11 months to rebuild the fallen Majerhat bridge until construction starts, the state government clarified on Monday amid renewed uncertainty over when the project would take off.

The public works department (PWD) had fixed a timeframe of nine months to rebuild the bridge that collapsed on September 4. This was later extended to 11 months, understood to be effective from the date of the contract being finalised.

Haryana-based SP Singla Constructions Pvt Ltd was given the contract on November 6 with September 15, 2019, as the deadline for a new bridge to be ready.

But the project appears to be stuck with the nuts and bolts of technical feasibility. The design proposed by the state government has had to be reviewed after it was found that the structure would “infringe” on the adjacent Joka-Esplanade Metro line.

Metro has already reported on the challenges that the contractor would face in coming out with a new design.

The government had suggested a bowstring structure with a deck slab 7.5 metres wide and a pedestrian walkway. A cable-stayed bridge has since emerged as a more feasible option because it will need less space.

“We are taking a realistic view of the deadline,” a senior PWD engineer said on Monday. “Unless the design is cleared and formalised, the contractor can’t start procurement. The 11-month timeframe should, therefore, ideally begin once the company starts rebuilding the bridge. There can be a slight overrun too.”

The immediate challenge is to finalise the design.

SP Singla Constructions has been asked to work on an “innovative” design, taking into account the challenges cited by the railways and Rail Vikas Nigam Ltd, the executing agency for the Joka-Esplanade Metro line.

Apart from a Metro station coming up barely nine metres from the fallen deck of the old bridge, there are rail tracks below where the new structure is to be built.

Once the design for the new bridge is ready, a “third party” will be assigned to review it before the official nod, PWD officials said.

This is an exercise that almost everyone agrees will be time-consuming because most agencies or institutions with expertise in such jobs are already loaded with assignments.

The PWD’s arrangement with SP Singla Constructions is an engineering and procurement contract. What this means is that the company will work out the design, procure all equipment and materials and then build the bridge.

The width of the deck slab might need to be reduced to avoid infringing on the proposed Metro station. The contractor will also have to factor in the time required to shift underground utilities.

PWD officials said the company was confident about building a cable-stayed structure and had assured the government that it would do so within the stipulated timeframe.

A large portion of the old structure above the rail tracks has yet to be demolished. “Our engineers are working out a schedule. We would need to suspend rail traffic on the Sealdah-Budge Budge section before starting the task. Several suburban trains and goods train ply on this route, so any stoppage will be disruptive,” a spokesperson for Eastern Railway said.