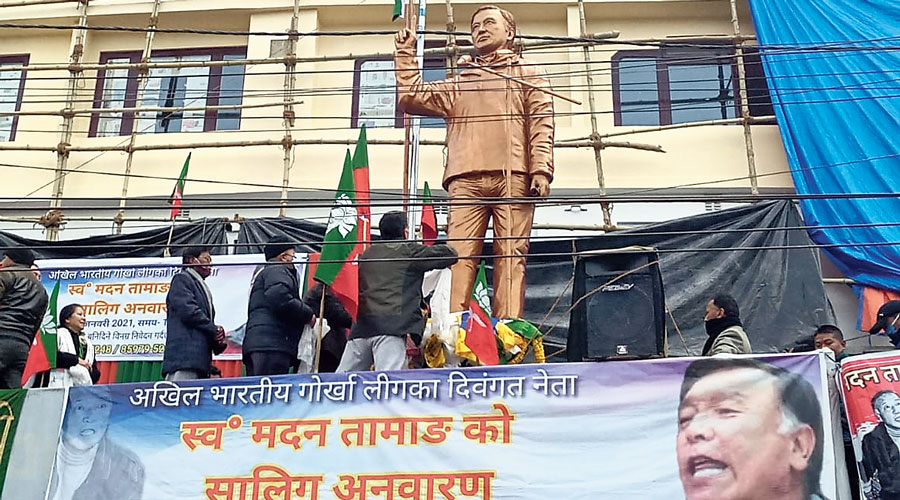 Akhil Bharatiya Gorkha League (ABGL) leader Madan Tamang had left his home Rhododendron Dell in the early morning of May 21, 2010, to address a public meeting, which many said would reveal some explosive details of hill politics, at Upper Clubside in Darjeeling.

Minutes before the start of the meeting, Tamang was hacked to death at the venue.

Ten years later, his family and the public at large have managed to complete Tamang’s dream of that fateful day.

A 12-feet statue of ABGL’s then president was unveiled on Republic Day by his wife Bharati at the same spot where he was killed at Upper Clubside. Bharati currently heads the faction-ridden party.

The statue is symbolic in more than one way.

First, the statue has been erected at the very spot where he was killed. Tamang is seen addressing the crowd the way he would have done on May 21, 2010, and is complete with a microphone. While his right hand is raised, the left hand is clutching a bunch of papers.

S.P. Sharma, convener, Salig Nirman Samity, said: “We wanted to recreate the image of Madan Tamang addressing the crowd that fateful day and thus complete his unfulfilled dream of that day. That is why we have also included a microphone. The bunch of papers in his hand is a reminder that Madan Tamang spoke with facts and evidence.”

The statue was sculpted by Kirpendra Gurung from Birpara in the Dooars and the total expenditure in installing it touched Rs 5 lakh. “Bharati Tamang helped us and the rest of the contribution was through the public,” said Sharma.

Many in the hills believe Tamang was the trigger behind the opposition to the Sixth Schedule demand raised by Subash Ghisingh, the late GNLF chief.

After Ghisingh was thrown out of power, Tamang started criticising the new power centre led by Bimal Gurung on grounds that even the Gorkha Janmukti Morcha had allegedly compromised on the Gorkhaland demand and it would finally settle for an autonomous council similar to the Darjeeling Gorkha Hill Council but with a change in the nomenclature that would include the word “Gorkhaland”.

Tamang’s prediction came true two years after his death with the formation of the Gorkhaland Territorial Administration (GTA).

Why did it take 10 years to erect a statue?

“His (Madan’s) brother Mohan had got a statue done some years back but then, the situation was not too good for the installation. Moreover, we felt even the face had not come out correctly,” said Bharati. “Also, some other people taking up the exercise would have been better and the statue committee’s initiative is laudable.”