LPG cylinder too costly, it’s back to firewood for Alipurduar women

Change mounting pressure on the forests and affecting biodiversity 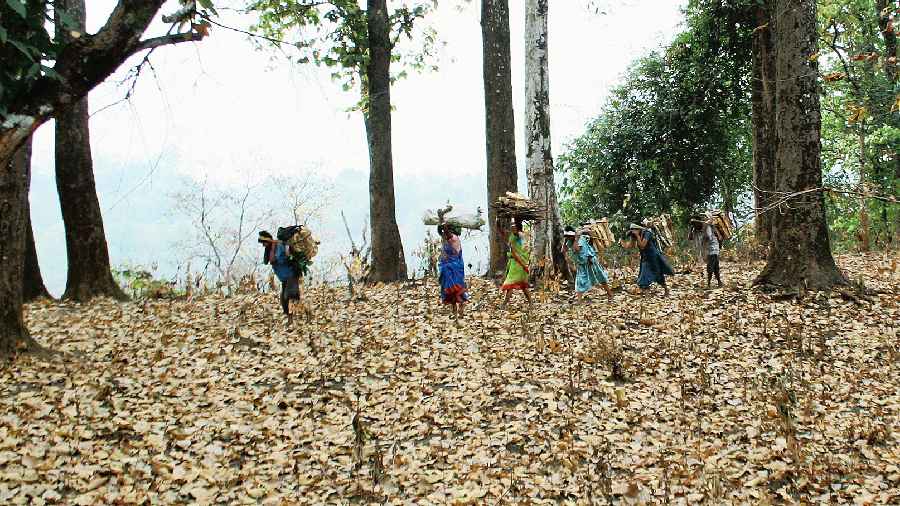 The consistent surge in prices of LPG cylinders over the past few months has prompted many forest villagers of Alipurduar district to opt for firewood for cooking, which not only harms forests but also highlights the failure of the Narendra Modi government’s much-talked-about Ujjwala Yojana.

In Alipurduar, there are 65 forest villages on the fringes of Buxa Tiger Reserve, Jaldapara National Park, Chilapata and similar patches of reserve forests. Around 30,000 families dwell in these tiny hamlets.

Most of these families live below the poverty line, making a living through agriculture or as daily wage earners in Alipurduar town and adjoining areas.

Lal Singh Bhujel, convener of the Uttarbanga Van Jan Shramajeevi Manch, which works for forest dwellers’ rights, said the shift to firewood is mounting pressure on the forests and biodiversity.

“We had heartily welcomed the Ujjwala scheme as the distribution of LPG connections to these poor families helped in the conservation of forests and biodiversity. Also, collection of firewood involves risk as these forests are wildlife habitats. There have been instances when people died in animal attacks while collecting firewood. The use of LPG had also reduced air pollution in these hamlets and improved women’s respiratory health,” Bhujel said.

Things, however, changed drastically in the last few moths, he said. According to him, discontinuation of subsidy for LPG users and rise in price of cylinders have forced the forest dwellers to abandon LPG cylinders.

“On an average, these families earn less than Rs 5,000 a month and cannot afford to buy a cylinder by for Rs 1,000. That is why most have stopped using LPG and are back to using firewood to cook their meals. Such a sudden change has obviously increased the pressure on forests and again left those collecting firewoodvulnerable to elephant attacks,” Bhujel said.

That marginal families have little option was evident from the clear assertions of residents like Devika Mahato who is from Dalgaon forest village, and Gita Oraon of Newlands forest village.

“How can we buy a cylinder by paying such a high price? If I save money, I can buy vegetables. Cylinders seem to be yet another empty promise of the central government,” said Gita.

Over the past three months, she, along with some other villagers, mostly women, are going out to the adjoining Dalgaon forest on alternate days for firewood.

“The clay oven that we had cast aside for our LPG stoves is back in use again. What other option do we have?” asked

Environmentalists say a family residing in a forest village uses around 80 kilos of firewood a month or around 10 quintals a year.

“This clearly indicates how much minor timber, twigs and tinder are being carried away from forests. This leaves a direct impact on biodiversity. Also, there is always fear that trees might be felled in due course for want of fuel, a practice that had stopped after villagers had started using LPG,” said Jiban Krishna Roy, an environmentalist.

Senior foresters posted in the region have also expressed their concern and said they are planning to hold talks with the villagers in due course.

“If collection of firewood resumes in reserve forests, it will obviously increase pressure on the forest land. We are aware of the issue and have asked our officers to speak with representatives of Joint Forest Management (JFM) committees so that some solution can be worked out,” said Ujjwal Ghosh, the additional principal chief conservator of forests (north). JFM committees, which were formed to conserve and protect forests, comprise representatives of forest villages are being monitored by forest officers.

The much-hyped Ujjwala scheme was launched by the Modi government in 2016 with an initial target of 50 million LPG connections for women living below the poverty line.