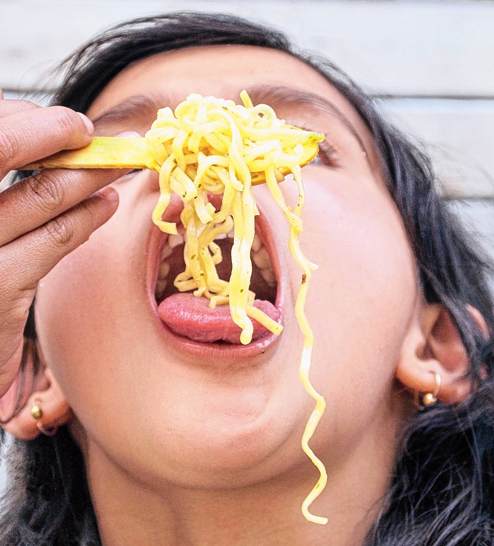 Outside China, two things Chinese flourished best in Calcutta and its surroundings: a certain brand of communism and chow mein.

Communism in Bengal is no more. Very recently, after shocking allegations, Maggi has also left, and mothers are bereft at tiffin-making time. But life still goes on, even after instant noodles.

There's something about chow mein and Calcutta. Chow mein has lasted long. It has become something the city can call its own.

It has been demonstrated to the Chinese too, perhaps not always with the desired effect. Coming up against a line-up of Chinese guards with impassive faces on the other side of the border at Nathu La, a group of Bengali tourists wanted to make them laugh. " Chowmin, chowmin, chilli chicken, chilli chicken," they went, gesticulating wildly with their hands, as the Chinese guards glared at them even more.

It all began a long time ago.

"As the story goes, in the late 18th century, a Chinese gentleman, Yang Achew, arrived in Calcutta and received land for a plantation from Warren Hastings. He brought in workers from China," says Ian Zachariah, food and travel writer. More Chinese people arrived, he says, many as refugees from the political troubles of China, and soon Calcutta had its Chinatown in Tiretta Bazar, which would remain the city's only Chinatown till the second one came up at Tangra.

As restaurants and eating houses in the area began to cater to the first Chinese settlers, many of them carpenters and shoemakers, Calcutta's original Chinatown, around and off the lanes and bylanes off Tiretta Bazar and Bowbazar, it is likely, says Zachariah, in this cosmopolitan and crowded area of Calcutta, "each community had its own cuisine, customs and prejudices, so there was no real intermingling". But a good thing cannot be contained. Chow mein began to get popular with those from other communities. Many were drawn to the food stalls by the aroma of the noodles - they were handmade and had an extra bounce - and the fragrant broths.

By the 1920s Calcutta had its own excellent Chinese restaurants. Nanking opened in 1924. The city was acquiring the taste of the subtly flavoured Chinese dishes, very different from the fare served now.

"Going out to eat Chinese food was considered quite an adventure till the Sixties. There was the 'different' ambience of Chinatown with its narrow streets and red paper flags, and in the middle of the hubbub were such brilliant restaurants as Nanking and Ta Fa Shun. And, of course, the less salubrious but legendary Fat Mama's Place," says Zachariah.

"Peiping on Park Street and Nanking in the old Chinatown were iconic," says Sajni Mukherji, former professor of English at Jadavpur University. At Nanking, the food was served elegantly. "In front of that wonderful Buddha statue. Lovely crockery and cutlery. Proper cloth napkins...," she remembers. The food was excellent, wholesome and affordable, and if it came with the occasional warning that you were also being fed cockroaches and lizards, it was ignored, Mukherjee adds.

She mentions a slight hiccup in the Sixties after the India-China border scuffle when the iconic Ta Fa Shun became a "Tibetan" restaurant. It was soon back in vogue, though many local Chinese had begun to emigrate. "Gradually the Tangra Chinatown grew with the closing down and moving away of leather manufacturers," she says. But the food is "not quite so authentic. No pork or beef", she says.

At Nanking, where Raj Kapoor and Dilip Kumar would drop in (an apocryphal story says even Tagore had dropped in), but which closed down in the Seventies because of property-related dispute, there was no chow mein, no sweet corn and chicken soup. Rice was served free in a bowl. The soups were clear broth and the vegetables were al dente - you had to use your teeth to chew them, an old-timer had insisted.

By the Seventies, chow mein had invaded the Bengali kitchen. By the Eighties, it was being sold at roadside stalls, with tomato ketchup, chilli sauce, mustard and slices of raw onion and cucumber. " Chowmin chachchari" had arrived. It is a staple in many homes.

Mukherji thinks noodles are being cooked in Bengali homes for at least 60 years. She remembers noodles being sold in New Market from the Fifties. "I saw them being sold in packets for single consumption or larger ones. It was also sold loose. They used to be manufactured in Chinese places. And even now they always seem to have Chinese names on the small printed squares inside transparent paper," she says.

"It is quite likely that noodles entered Bengali bhadralok kitchens through Italian cuisine, using spaghetti as the staple element. I remember, it was considered a treat if the cook made a 'chow' for dinner, often with noodles hand-cut in strips from a sheet of dough," says Zachariah.

As one walks past the ghostly Nanking building now, the structure rising out of the squalor and din at Poddar Court, it is difficult to imagine the old Chinatown, intriguing, even exotic. A few metres away stands the Pou Chong store, leading sauce and noodles manufacturer like Sin Cheung, which has its office on the opposite side of the road.

Janice Lee is a young woman who has studied both in Calcutta and Canada, the most popular destination for the city's Chinese who have migrated. She sits at the Pou Chong counter. Her grandfather had started the business in the Fifties, the same time Sing Cheung also started.

She credits her grandfather with inventing the green chilli sauce, which married Indian and Chinese flavours. Since then they have been selling many other sauces, such as garlic chilli sauce or momo sauce.

The Chinese themselves helped invent the Calcutta chow mein. With packaged noodles, came the "Chinese sauces" made in Calcutta, green chilli, chilli garlic, hot garlic, which have nothing to do with Chinese cuisine but everything to do with Calcutta's taste.

What is true about its ingredients also holds about its name. Chow mein is not necessarily what the Calcuttan thinks it is. Janice, who is part of The Cha Project, which aims at reviving the Chinese community's heritage in Tiretta Bazar area, explains with a smile that "chow" doesn't mean noodles, it means stir-fried; "mein" means noodles. "Chow mein" is stir-fried noodles in Cantonese.

But it doesn't matter. She loves street chowmin herself, served with all the Calcutta toppings.

"The history of Chinese food in Calcutta is not documented," says Paul Chung, the 74-year-old president of the Indian Chinese Association, who lives in Tangra, where most of the Chinese community, about 2,000-odd strong Chinese community is now concentrated.

Now, of course, Calcutta Chow Mein is a cuisine by itself, if not a multi-cuisine. It has many names, from chow mein to chow chow to chowmin to just chow or chou, and is capable of infinite variety, from Manchurian to Szechwan, which are provinces in China, at the best cuisines, but not dishes or sauces.

For Iftekhar Ahsan of Calcutta Walks, who organises tours in and around the city, chow mein is often on the menu. On his street food tour, he treats people to the street chowmin; on other tours he takes them to Eau Chew, one of the few old Chinese eateries to be still run by a Chinese family. Here the dishes, including the noodles, are served without being smothered in sauces (Josephine Noodles is particularly recommended).

Ahsan feels that Calcutta is open to food, and particularly to hill food such as momos, and chow mein might be seen as an extension of that.

And it thrives. And it grows. As do the two pillars of the Calcutta Chow Mein, the Hakka and the gravy.

The Hakka chow mein, only found in Calcutta, gets its name from the Hakka community, who were the majority among the first Chinese settlers in the city. But why gravy chow mein is called so is yet to be discovered.

It really doesn't matter. At Hatari, the 49-year-old restaurant in Gariahat, "60 per cent of our customers order Chinese, especially gravy/Hakka chow mein with chilli or Manchurian dishes", said Kushal Bhaduri, the vice-president (corporate) of the restaurant.

At Dacres Lane, chow mein is a lunchtime favourite at Chittoda's shop. "We serve it with both chilli and tomato sauce," said the cook. Chow mein is ubiquitous in all college canteens.

Calcutta just needs to export its chow mein to China.