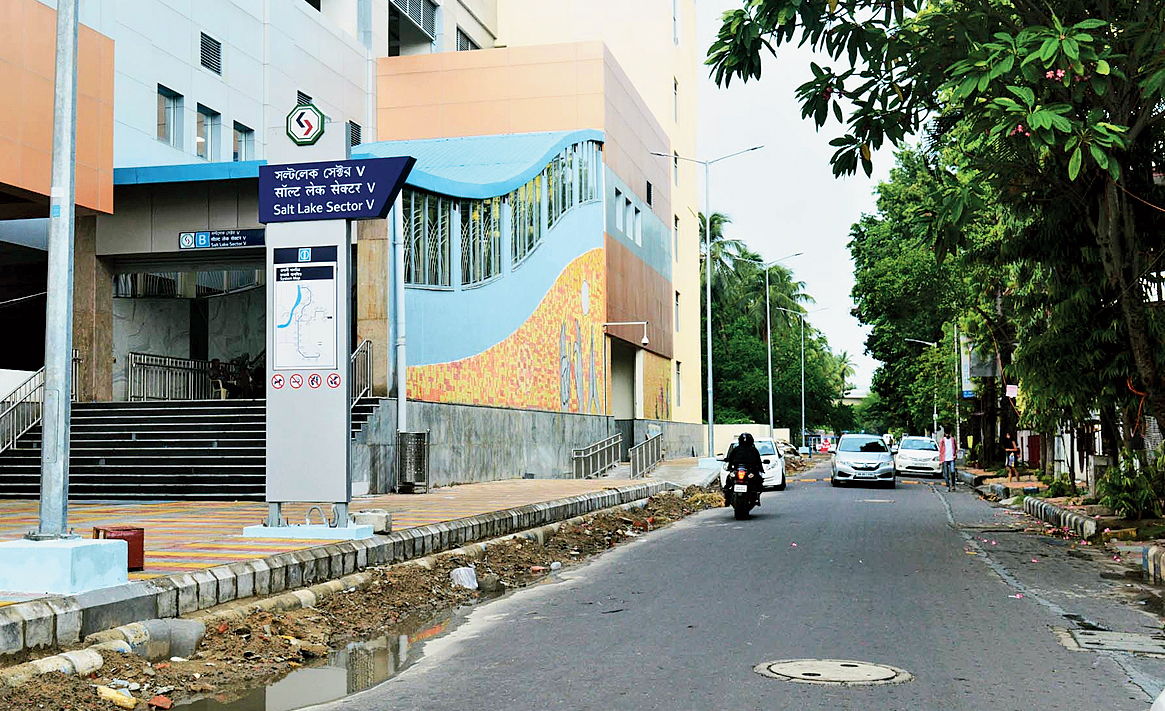 After a decade of construction, the East West Metro rail is finally on its last lap. But besides the excitement comes a host of worries, especially for those living around the final stop, opposite Wipro.

The Metro will link Howrah in the west to Salt Lake in the east and a station has been built between CL Block and Sector V, over the Eastern Drainage Canal. But residents of AL, BL, CL and DL Blocks, who live on that stretch, are spending sleepless nights worrying about the problems that the Metro will invite.

Citizens’ Forum Salt Lake, a collective body of residents, had organised a meet at CK-CL community hall on June 28 to share concerns on this issue and discuss solutions. Here are some of the points discussed-

Traffic congestion- “All the Metro stations in the city are built on main roads but this one opens into a residential lane in CL Block,” pointed out founder of the forum, Justice (retired) Soumitra Sen. “The lane is narrow and will choke if buses, autos and rickshaws start crowding around looking for passengers. Residents will not be able to take their cars out of their driveways during rush hours.”

Water hyacinths and wild growth engulf much of the canal under the viaduct.
(Debasmita Bhattacharjee)

A broken gate of the canal-side park tied to a pillar.
(Debasmita Bhattacharjee)

Other stakeholders expect footfall to increase too. “As of now, this is a lonely stretch,” said rickshaw driver Uttam on Sunday. He is one of the 30 drivers at the CL-DL Block Rickshaw Stand. “The only ones to come here are Ola, Uber drivers who park their cars and passers-by who want to relieve themselves. But who knows? Once the Metro starts we may just get more passengers.”

Proposal: The forum suggested that the authorities designate pick up and drop points at a reasonable distance from the exit instead of allowing public transport providers to crowd the entire lane. That would also help keep noise and air pollution under check. “At the same time, the footpath must not be narrowed to increase motorable road. Pedestrian space must be respected,” Sen said. The forum also requested convex mirrors at turnings to increase visibility for drivers and reduce accidents.

Littering- Despite repeated clean-up drives, the state of the canal is once again wretched. Yards at a stretch can’t be seen due to water hyacinths and the rest is so dirty and smelly that one wants to turn away.

Water hyacinths are invasive plants that reduce oxygen supply under water, thereby killing other aquatic plants and fish. They also act as a breeding ground for mosquitoes leading to vector-borne diseases, a menace threatening canal-side blocks every year.

The water is black and has thermocol and plastic bags floating. The canal sides have become unruly jungles and the space next to the footbridges are piled with construction rubble that threatens to slide into the water any day. “The trash in the water often gathers to form islands,” said Sen in his presentation. “This causes widespread environmental damage and is not the problem of AL to DL blocks alone.”

Proposal: The forum suggested the canal be cleaned and dredged regularly.

Hawkers- “While in Calcutta proper, 80 per cent hawkers sell non-food items, in Salt Lake 99 per cent of them sell food,” Sen cited from their studies. “A hawker selling saris on the footpath will obstruct pedestrians but will not create waste like a hawker cutting and cooking meat and fish. Since these hawkers squat illegally, the corporation does not collect their garbage. They dump everything on the street, manholes, gully pits, and in this case, the canal.”

Hawkers keep settling and getting shooed off the canal side between AL and DL blocks. No wonder the bank of the canal has egg cartons and stale rotis rotting away.

On Sunday, the owner of a pice hotel on the bank opposite AL Block said he was sanguine about the Metro opening. “I have been here for 10 years but business has dropped somewhat after they built a metallic footbridge next door. It has eaten into my space. If the Metro station exit leads passengers to my shop it would do us good,” he said on Sunday.

Proposal: The forum suggested the authorities regulate the number and location of hawkers and not allow them outside designated hawking zones.

Hawkers lined up next to the canal, opposite AL Block.
(Debasmita Bhattacharjee)

The spikes on top of the park’s grills bent and broken for easy entry.
(Debasmita Bhattacharjee)

Vandalism- Last July, the canal side from Sluice Gate in AL Block to the Chingrihata More at Jal Vayu Vihar had been beautified at a cost of 4 crore after evicting 200-odd encroachers. “Within two months, every lamp of the verge had been smashed or stolen,” said Sen, adding that a CCTV installed in one of the houses on the stretch had even caught a thief in the act.

The lamps are not the only casualties. The walls have been broken down in places, some trees hacked, tiles have come loose and most of the park is overrun by wild growth. The gates remain locked to public but the spikes along the top border of the grill gates have been bent and broken in places, ostensibly so they can be crossed by athletic intruders at will. In Sector III, squatters even hang their clothes to dry on the gates.

“Tax payers, whose money has built the park, cannot enter it but vandals do so freely,” Sen pointed out. “We residents living opposite the park are scared about our security now.”

The Metro has built two small bridges under the station for passengers to cross from Sector V to CL Block and vice versa. “But in the evenings motorbike after motorbike starts entering the block using those bridges. How can residents feel safe with so many outsiders invading our privacy?”

Proposal: The forum suggested installing barricades at both ends of the bridges so as to block entry for bikes. “Also, we want the authorities to throw open the green verge for residents. Set up benches, keep it lit up... If residents frequent the park criminals will find no place here.

A smashed lamp at the canal side.

Official speak- Besides residents, the gathering was attended by a number of dignitaries who heard out the problems.

Mayor Sabyasachi Dutta spoke vehemently against hawkers. “Most residents of Salt Lake pay property tax but hawkers have a free run. Those squatting near Behind Bikash Bhavan cook 40 to 50kg of meat a day and throw their waste in manholes,” said Dutta, asking residents to unite in their stand against the problem.

The canal-side is under the care of the urban development (UD) department but the mayor said he has been asking UD to handover the maintenance to the corporation, along with a fund. “The park will be easier for us to maintain than the UD, that has many other jobs,” he said.

Also present was principal secretary of urban development and municipal affairs department, Subrata Gupta, himself a resident of CF Block. “On principle we have no problem handing over the park to the corporation but we do not have budgets for specific parks to give them,” Gupta said. “In any case the canal has recently been handed over to the irrigation department as they are experts in the field but we will have to check if that includes the adjoining park.”

There was a representative of the Metro present who addressed the problem of bikes using their bridges to enter into CL Block. “We shall be building barricades on the bridges to stop bikes,” said a consultant of the Kolkata Metro Rail Corporation. “The bridge is for passengers to move between the two entrances at CL Block and towards Wipro.”

A police officer of Bidhannagar Commissionerate heard out the points and said they had been doing their own survey to identify possible bottlenecks because of Metro operations. “We are working on it and will ensure traffic is smooth and the neighbourhood is safe,” he said.