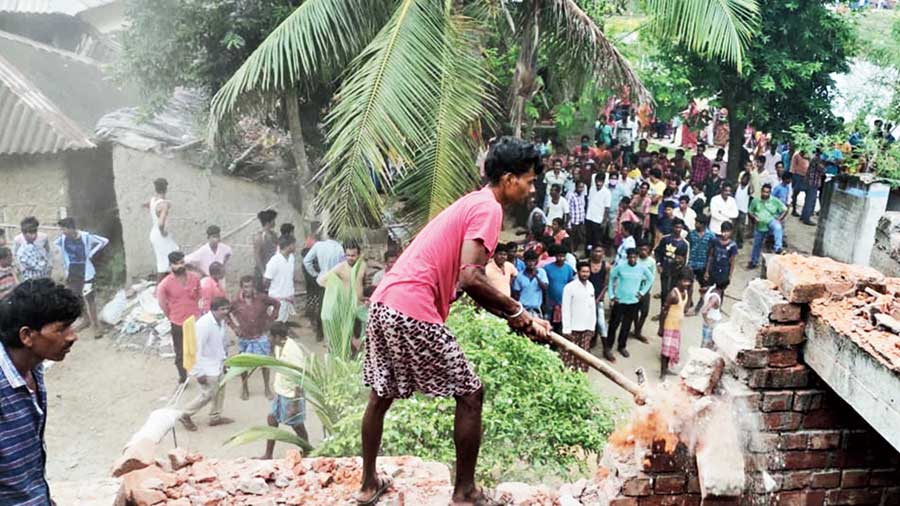 Villagers demolish the house of one of the accused in youths at Galsi on Friday.
Munshi Muklesur Rahman
Snehamoy Chakraborty   |   Burdwan   |   Published 19.09.20, 01:43 AM

Police early on Friday discovered the body of a nine-year-old boy, a Trinamul Congress gram panchayat member’s son, who had allegedly been kidnapped for ransom on the night of September 16 from East Burdwan’s Galsi.

The body was found in an irrigation canal of the Damodar Valley Corporation in Galsi’s Sanko village, where the boy lived, said the police.

An investigation into a police complaint by the boy’s father led to the arrests of three local youths on Thursday night, following which the body has been seized. The trio — Badsha Majhi, Jayanta Bag and Mangaldip Dolui — are in their early twenties and are labourers.

“We have arrested three youths in connection with the kidnapping and murder of the boy. Two of them were directly involved in kidnapping and murder. They had carried out the abduction to earn easy money and we have started a probe to find out if there was any specific motive behind the crime,” said Bhaskar Mukherjee, the East Burdwan police chief.

A police source said Sandip Dolui, a student of a primary school at Sanko, was the only son of local Trinamul gram panchayat member Buddhadeb Dolui. Sandip had stepped out to buy firecrackers from a village shop on the occasion of local puja on September 16 evening when Jayanta and Badsha abducted him. The same night, the duo called up Buddhadeb and asked for a ransom of Rs 7 lakh.

“After bargaining, the kidnappers agreed to release my son if I paid them Rs 3 lakh. They had warned that if I informed the police, that would endanger the life of my child. As we did not have money to pay the abductors, I informed Trinamul leaders and sought their help on Wednesday. The police were also informed verbally and I lodged a written complaint yesterday (Thursday). I never imagined that they would kill my son,” said an inconsolable Buddhadeb.

Police sources said the duo had stolen the SIM card of their friend Mangaldip and used it to make the ransom call.

“We first tracked the phone number from where the ransom call was made and arrested Mangaldip on Thursday. Interrogations then led to the two youths, who were arrested last night. They confessed to the crime and said the boy’s body had been dropped in an irrigation canal of the Damodar Valley Corporation. We have seized the body. The boy had been strangled,” said a senior police officer.

After the body was found, around 300 villagers ransacked the houses of Jayanta and Badsha with hammers and iron rods.

“The youths knew the boy well and killed him for money. This is unpardonable and so we have ransacked their home,” a villager said.

A Burdwan court on Friday remanded the arrested trio in 10 days’ police custody.