The GNLF, an ally of the BJP, has categorically stated they would not contest the Gorkhaland Territorial Administration (GTA) polls as it allegedly failed to fulfill the aspirations of the hills 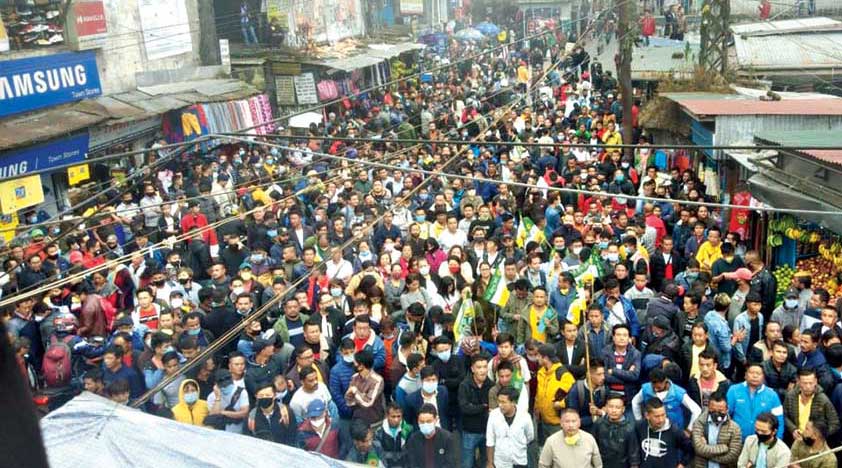 The GNLF and BJP leaders have also not yet defined the proposed permanent political solution.
File photo
Vivek Chhetri   |   Darjeeling   |   Published 16.12.21, 01:19 AM

A response by Union minister of state for home affairs Nityanand Rai in Parliament on a query related to permanent political solution raised by Congress leader Gaurav Gogoi has triggered a fresh debate in Darjeeling on the BJP’s intentions related to the most emotive issue in the hills.

Gogoi, deputy leader of the Congress in Lok Sabha, sought a written answer from the Centre on the PPS what was provided by junior home minister Rai on Tuesday failed to define the PPS.

In the 2019 Lok Sabha election manifesto, BJP promised a “permanent political solution” for the region, without defining it. BJP allies had tried to interpret PPS as the state of Gorkhaland. On the last day of the poll campaign, BJP’s Raju Bista promised “Gorkhaland.”

But the lack of definition continues three years down the line, as was evident by Rai’s response to Gogoi.

Gogoi had wanted to know the “status” of PPS related to Gorkhas in Bengal and “its details” along with those of tripartite talks, major claims and demands of the parties involved in the talks and major decisions taken there.

The Congress legislator from Assam also wanted to know “whether the government has set a deadline set up for concluding the tripartite talks and implementing a mutually-agreed upon permanent political solution and if, so, the details thereof.”

In response to all the questions, Union minister Rai stated: “The all-round development of Gorkhas including those living in West Bengal is one of the top priorities of the Government. In a meeting with the representatives of Gorkhas on 12.10.2021, it was mentioned that the aspirations of the people would be met within the Constitutional framework and in consultation with the Government of West Bengal.”

The October 12 tripartite meeting in Delhi was attended largely by BJP MPs and MLAs and leaders of its allies. The GNLF, an ally of the BJP, has categorically stated they would not contest the Gorkhaland Territorial Administration (GTA) polls as it allegedly failed to fulfill the aspirations of the hills. The BJP, too, is opposed to the GTA.
However, both the GNLF and BJP leaders have also not yet defined the proposed permanent political solution.

Rai’s reply has given room for both pro and anti-BJP proponents to come up with their own interpretations.

Anti-BJP advocates claim any provision arrived at “in consultation with the Government of West Bengal” can’t be a separate state, which is the prime demand from the hills.
“If the Centre wants to grant Gorkhaland, there is no need for talks but they can simply place a bill in Parliament. The BJP has been hoodwinking the hill people for more than a decade now,” an anti-BJP camp leader said.

Neeraj Zimba, MLA from Darjeeling on a BJP ticket who is also a GNLF leader, on Wednesday claimed Rai’s reply meant thing were moving in the right direction.
“The reply is a clear indication that the PPS issue has moved from the BJP’s manifesto to a policy issue of the Centre. The Centre has said it is giving top priority to this issue of fulfilling the aspiration of the hill people, which is Gorkhaland, and the demand of Gorkhaland is very much within the framework of the Constitution,” said Zimba.

He said although the second round of tripartite talks were due, backdoor consultation with various stakeholders and “chief ministers of Northeast and neighouring states” were being held continuously in Delhi through government agencies.