Advertisement
Home / West-bengal / I am not fit for ‘setting’, says Mamata Banerjee

I am not fit for ‘setting’, says Mamata Banerjee

Every part of my body was injured because I didn’t strike deal with Left Front during 34-year rule: CM 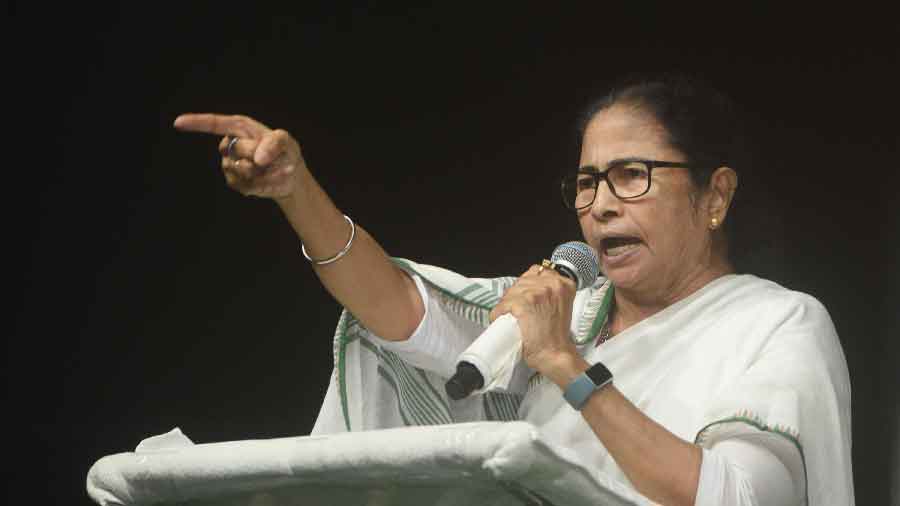 Mamata Banerjee on Wednesday said she had met Narendra Modi in New Delhi earlier this month to demand money owed to Bengal by the Centre, lambasting the Opposition for accusing her of attempting a “setting” with the Union government in the face of alleged hyperactivity by federal investigation agencies in the state.

At a news conference at the secretariat in the evening, the Bengal chief minister sought to debunk the “setting” charge she had first broached in

public in her speech at a Trinamul Congress event on August 14, nine days after her one-to-one meeting with the Prime Minister had set tongues wagging.

“We are not seeking alms, only demanding our dues. In that too, if I go and meet the Prime Minister and talk to him, these local BJP elements, who prance and dance about, go around saying I went for a ‘setting’,” said a visibly agitated Mamata at Nabanna.

On August 5, Mamata had met Modi for 45 minutes, urging his intervention for prompt release of funds due to Bengal under several central schemes and as devolution of taxes and disaster relief. The total dues, according to Mamata, added up to Rs 1,00,968.44 crore till July 31.

“Let me say this, if I were willing to go for a ‘setting’…. Many keep waiting to strike a ‘setting’ with me, but I do not do it. Because I am not fit for it,” she added at the news conference. “What I am not fit for, how will I do it? How will I participate in the ‘setting’?”

On August 14, Mamata had said she was sick of the “setting” allegation being levelled every time she went to Delhi, although it was her duty as the chief minister to do so at times for getting what the Centre owed the state.

On Wednesday, Mamata said: “Only because I could not go for such ‘settings’ in the 34-year rule of the Left Front… so many Congress leaders had succumbed, I was not able to. Only because of that was every part of my body injured, from getting beaten up by them.”

Against the backdrop of the arrests by central agencies of now-suspended Trinamul heavyweight Partha Chatterjee (the party’s Birbhum strongman Anubrata Mondal was yet to be arrested), and the apparently renewed vigour with which the central probe agencies were conducting exercises in Bengal, the chief minister’s one-to-one meeting with Modi had prompted jeers from the state’s Opposition.

Since the August 5 meeting between Modi and Mamata, the CPM and the Congress — even sections within the BJP’s Bengal unit — have been accusing her of having cemented the alleged “setting”, which they held responsible for her verbal support to the NDA’s presidential candidate Droupadi Murmu, despite having fielded Yashwant Sinha as the Opposition candidate.

A senior Trinamul MP pointed out the invite extended to Union home minister Amit Shah by the CPM’s Kerala chief minister Pinarayi Vijayan recently to be the chief guest at the renowned boat race named after Jawaharlal Nehru during the Onam festival.

“Had she done something remotely close to that, think of the ‘setting’ allegations from the Left that would have flooded social and mainstream media with,” said the MP.

On Wednesday, Mamata also launched an attack on the BJP-led Centre and various state governments over a number of issues, ranging from the remission of the gang-rape convicts in the Bilkis Bano case to the rise in fuel prices and the imposition of GST on items such as packaged puffed rice.

“Why can you (the media) not seek explanations from those who entirely sold off the country? Such a lot of increase in fuel prices, where did the money go? When crude oil prices fell globally, they kept hiking fuel prices here. Where did all that money go?” she asked.

“You don’t give us money owed to us. Now there is only one tax, the GST. All the money from the state (through GST) you are taking away. But you are not giving the state’s share of that,” she added. “The BJP? Go find out in the states they rule, what goes on there. Nobody gets justice. Daily, a Bilkis Bano. Farmers are murdered during movements, but responsible ministers are not arrested.”