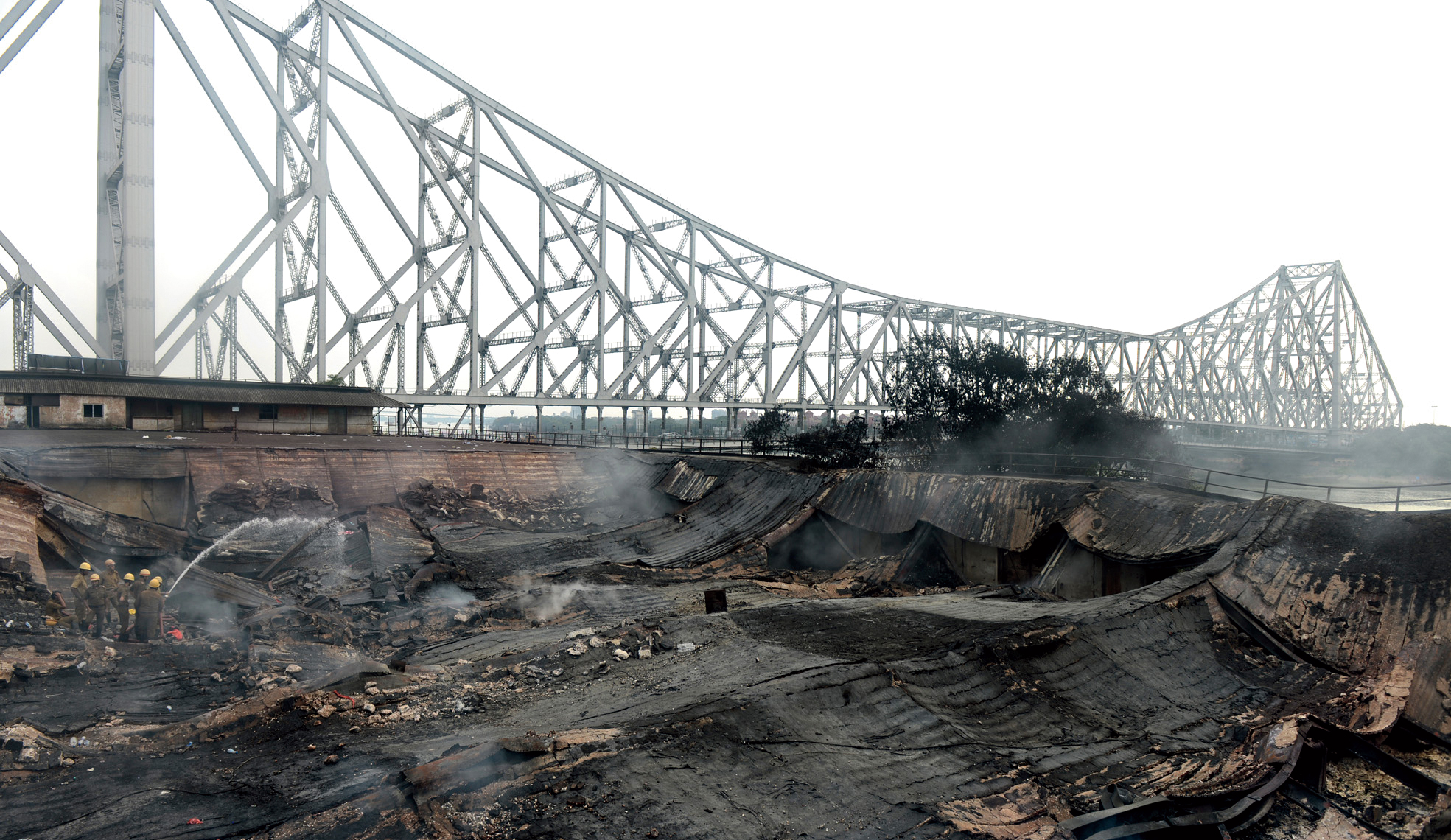 The fire services department will ask the logistics firm, which ran the godown gutted in a fire near Howrah bridge on Saturday, about steps they had taken to install fire-safety measures at the facility.

Fires services minister Sujit Bose said on Sunday that the department would shortly serve a notice to seek the company’s clarification on the fire-safety measures it had adopted at the godown.

However, an official of the logistics company — Inland World Logistics Private Limited — claimed they had already applied for a fire licence.

The fire that started around 2.15am on Saturday had spread from a shanty adjacent to the warehouse on the banks of the Hooghly.

A senior fire services department official said initial inspections showed there were only a few fire extinguishers at the gutted godown. “We did not find any sprinklers, fire alarms or water hydrants,” he said.

Till late on Sunday, firefighters were still working inside the godown searching for embers of fire and dousing them.

“There is still a lot of smoke inside the godown. We are spraying water to cool down the place. We also have to search for remnants of fire before we call off our operation,” said a fire brigade official on Sunday.

The flames were so intense that even after they were doused the temperature inside the godown remained over 100°C.

A forensic team that visited the gutted godown on Saturday had to return because the temperature was not suitable for them to pick samples or inspect the damaged portion.

“We found temperatures as high as 140°C when we went there. We cannot work till temperature in the confined space goes down to 45°C,” said a forensic official.

The intense heat could have led to the collapse of the first-floor roof, said a civil engineer.

“When there is a lot of inflammable material inside and the flames burn for long, the temperature of the confined space reaches close to 700°C,” said an engineer.

“Iron starts losing its strength and other properties from the time temperature hits 500°C,” he said.

Metro saw at least one buckled column and several damaged beams on a portion of the first-floor ceiling.

Bose told Metro that he was surprised that the port authorities did not take any steps to stop the recurrence of such fires.

“I will also try to find out why the port authorities do not take steps to stop such recurrent fires,” he said.

A fire had broken out in a warehouse on the banks of Hooghly near Armenian Ghat in November 2017.

Another fire had ravaged a godown on Transport Depot Road in the port area in October 2017.

The Calcutta Port Trust is the owner of majority, if not all, of warehouses along the riverbank, but they lease out the spaces to companies that run them.

An official of Calcutta Port Trust had said on Saturday that lessees were responsible for undertaking fire-safety measures and the agreements were executed accordingly.

But a retired fire brigade official said that even then the onus fell both on the owner and the occupier.