Leaders flock to the village of deceased Class IX girl 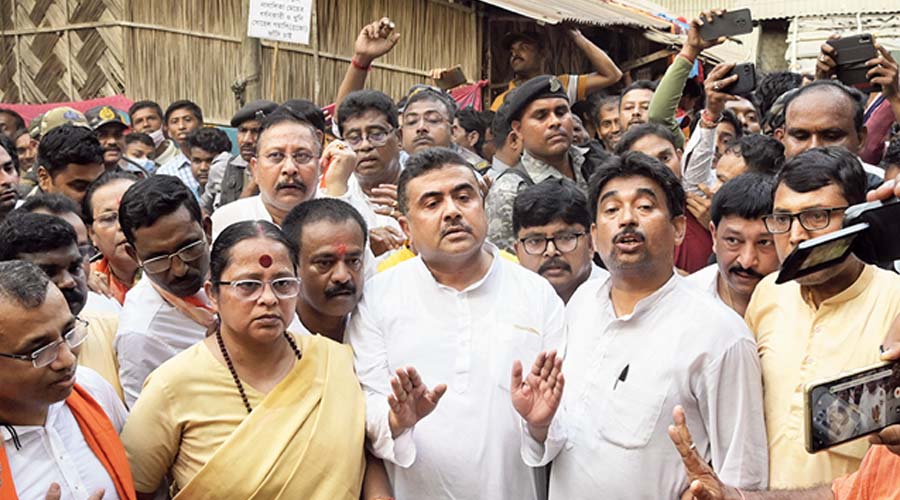 A number of leaders from across the political spectrum on Tuesday flocked to Hanskhali in Nadia district where a Class IX girl had died apparently from excessive bleeding on April 5 following gang-rape.

Later in the day, Calcutta High Court ordered the CBI to probe the case.

First to visit the village was Trinamul Congress MP Mohua Moitra who assured the girl’s family members that her party and the Mamata Banerjee government would stand by them and ensure punishment for the perpetrators of the crime.

Moitra raised concern about the absence of evidence as the girl had been cremated shortly after she had died.

“Police are carrying out an investigation despite drawbacks in available evidence. The guilty will not be spared. We have a zero-tolerance policy,” said the Krishnagar MP, adding that the police had been instructed to find out the persons who had allegedly intimidated the minor’s parents and discouraged them from lodging a complaint.

“The prime accused has already been arrested. One of his friends was also arrested. We came to know that apart from the prime accused, at least two other friends were involved in the crime. They are criminals and their political identity will not matter. The state government will not tolerate such a crime,” she said.

In an apparent bid to control damage over chief minister Mamata Banerjee’s remark on Monday, the Trinamul MP said: “Even sex with a minor girl with her consent is a rape. That is why the police booked the accused under the Pocso Act.”

Moitra acknowledged that there were several unregistered crematoria across the district, particularly in rural areas, where no death certificate was required for cremation.

“We always discourage such arrangements. But the situation is yet to change. The same thing happened when a dozen persons cremated the Class IX student’s body with ulterior motives. The police should have been informed,” she told reporters.

Moitra, along with Ananya Chakraborty, chairperson of the West Bengal Commission for Protection of Child Rights, visited the burning ghat where the girl’s body had been cremated.

Chakraborty also spoke to the father of the girl and he raised objection to the aspersions that Mamata had cast on his daughter on Monday.

Prabhakar Poddar, 20, an accomplice of Sohail, was arrested on the basis of his statement which he made during the police interrogation.

Poddar was charged with rape and produced in a court of additional chief judicial magistrate that remanded him in 13 days of police custody.