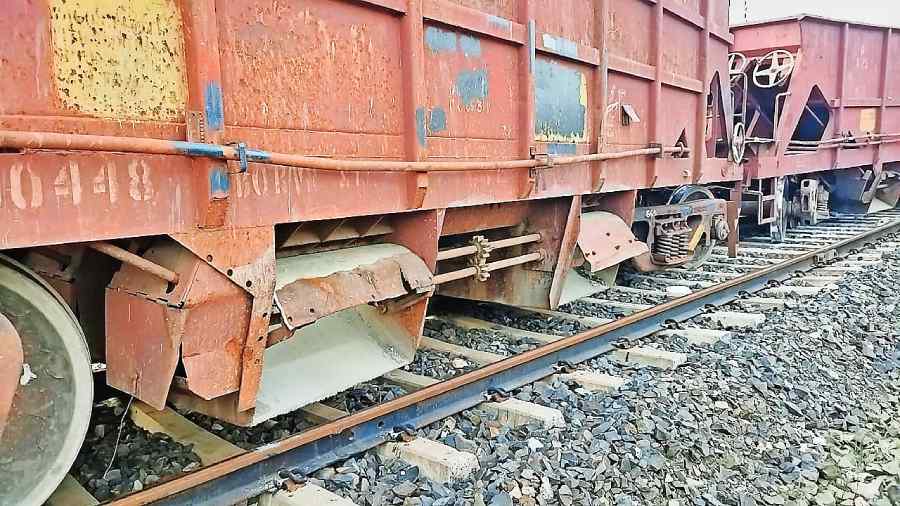 The derailed wheels of the goods train at Salbari station in Jalpaiguri district on Thursday afternoon.
Anirban Choudhury
Our Correspondent   |   Alipurduar   |   Published 24.06.22, 12:14 AM

Train movement along the New Jalpaiguri-New Alipurduar route, the main route that connects the Northeast with rest of the country, was disrupted for over two hours on Thursday afternoon as two wagons of a goods train derailed at Salbari, a station in Jalpaiguri district.

A number of long-distance express trains were stopped at different stations of north Bengal following the incident at 3.45pm.

Eventually, railway workers managed to bring the wheels of derailed wagons back on tracks.

Movement of trains was restored around 6.10pm.

Sources in the Alipurduar division of Northeast Frontier Railway (NFR) under which the derailment took place said the problem occurred with four wheels.

“Four wheels of wagons which were in eighth and ninth position of the train, derailed. Realising something unnatural had happened, the loco pilot used the shuttle brake and stopped the train. There were no injuries. However, a portion of the tracks got damaged and some concrete sleepers have broken,” said a source in NFR.

As the news spread, a team of officials and employees of the engineering department rushed to the spot. They initiated the task to bring back the wheels on the tracks.

“A goods train was unloading ballast and suddenly a few wheels got derailed. There was minor damage to the tracks which we will repair. Some trains were controlled at different stations for a couple of hours. As of now, trains are plying normally along the route,” said Dilip Kumar Singh, the divisional railway manager of the Alipurduar division of the NFR.