Nashipur rail bridge project all set to resume in November 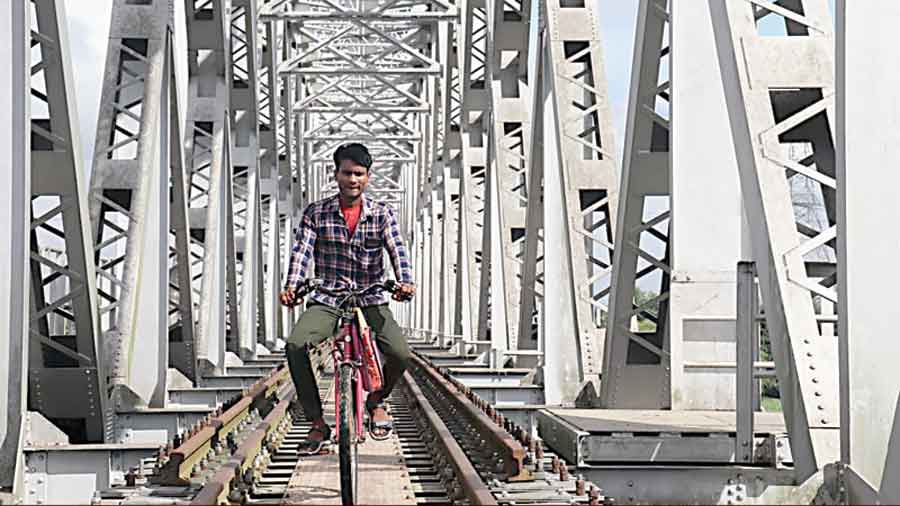 A youth rides a bicycle on the unfinished stretch of the Nashipur rail bridge in Murshidabad.
Picture by Alamgir Hossain
Alamgir Hossain   |   Behrampore   |   Published 18.08.22, 02:13 AM

The final phase of the construction of the Nashipur rail bridge in Murshidabad will commence in November this year, more than four years after it was stalled for the second time owing to a land dispute.

The project was stalled after local landowners had refused to part with seven acres on the west bank of the Bhagirathi river.

The 785m-long bridge, which was initially sanctioned in 2000 by then railway minister Mamata Banerjee, connects Azimganj railway station on the west bank of the river with Murshidabad station on the east.

Last week, the Railway Board sent the Murshidabad district administration a formal communication instructing that the remaining work would have to be completed within a window period between November 1 this year and March 31 next year.

The initial construction had begun in 2006, a year after then railway minister Lalu Prasad Yadav had laid the foundation stone.

More than 90 per cent of the construction was completed by 2016 before local landowners stalled the project because the Railway Board turned down their demand for railway jobs in exchange for land.

After a two-year hiatus, the work partially resumed in 2018 after the remaining land, located at Mahinagar village, was acquired at three times the market rate.

“However, landowners again raised a protest saying the district magistrate had given them their word regarding railway jobs in exchange for land,” said a source.

Incumbent district magistrate Rajarshi Mitra said the terminal construction this year would be undertaken on an “uncompromising” basis, notwithstanding protests if any.

“The bridge will be completed by March next year and trains will be active on it soon after... We are not anticipating any further protests but if they do happen, police action will be taken to ensure that work is not thwarted,” he said, adding that tenders and work orders pertaining to a November 1 start date had already been submitted.