On November 5, Hasan and Basu had received letters from IFFI, inviting them for the screening of the film, slated on November 22 at an auditorium in Panaji from 10am 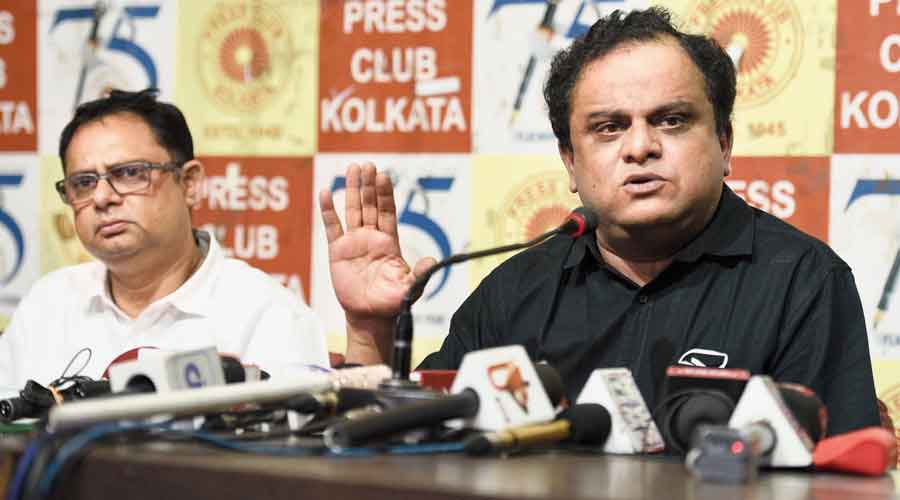 The upcoming International Film Festival of India has allegedly dropped — after formally including — a film directed by Bratya Basu, the Bengal education minister, who blamed political interests.

“The film was dropped to serve narrow and dirty political interests, at the behest of big babus in Delhi,” Basu, playwright, actor and director, told a news conference on Thursday.

The film, Dictionary, was among five Bengali films selected for screening in the “Indian Panorama” section at the 52nd edition of the festival to be held in Goa from November 20.

According to the film’s makers, the formal reason cited for the omission was an alleged mismatch in the spelling of the director’s name in two correspondences to the IFFI — by the Film Federation of India recommending the film for screening and in an application form filled up by the film’s producer.

But before the omission, the director and the producer of the film — based on a story by late author Budhhadeb Guha — had received letters from officials of the festival, informing them about the selection and inviting them to attend its screening.

“According to an official list released on November 5, as many as five feature films in the Bengali language were picked for the Indian panorama. The list included Dictionary. But a fresh list released by the Union ministry of information and broadcasting on November 6 did not include the film,” said Firdausul Hasan, the producer of the film and the vice-president of the Film Federation of India.

On November 5, Hasan and Basu had received letters from IFFI, inviting them for the screening of the film, slated on November 22 at an auditorium in Panaji from 10am.

“On November 6, the producer and the Film Federation of India, which had recommended the film for screening at the festival, received a communication from IFFI. It said the name of the director was spelt differently in two places — the letter of recommendation from the federation and in the application form submitted by the producer. IFFI called this a serious flaw,” said Basu.

The federation sent another letter to the festival authorities, acknowledging the “error” and requesting IFFI to revoke the omission. But an official sent a mail saying it was not possible to change the decision.

“My name is correctly spelt in all the letters sent by IFFI officials. It is clear that the authorities realised my political identity after the film’s selection and rejected it on flimsy grounds,” said Basu.

The film released in theatres early this year during Saraswati Puja, before the second Covid wave. The bitterly contested Bengal elections happened in the summer, resulting in a landslide victory of Trinamul, Basu’s party.