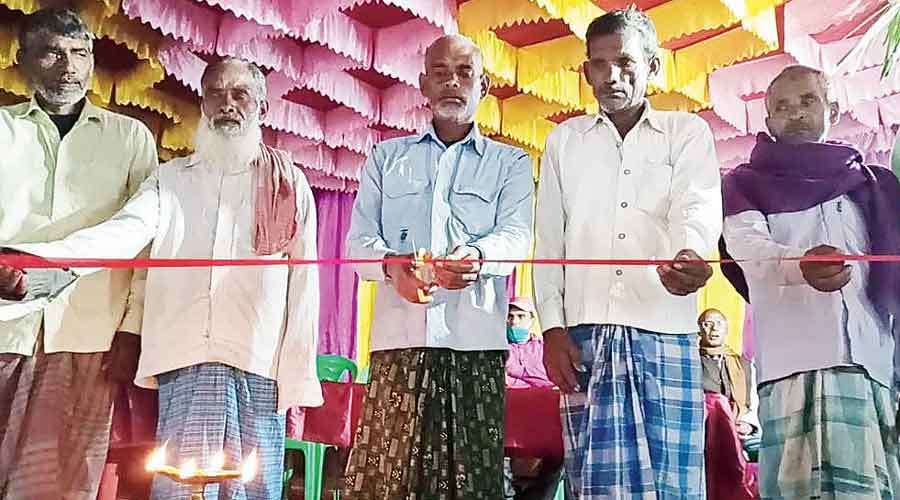 A group of around 15 farmers, both Hindus and Muslims, congregated at the venue of a Jagaddhatri Puja  in Malda district on Wednesday evening to inaugurate the puja.
Members of Agnishikha, a theatre group that has been hosting the puja for past few years at Chari-Anantapur, a village in Malda near the India-Bangladesh border, said that they wanted to show their respect to peasants who are engaged in the movement against the Centre’s farm laws and to those who had lost their lives in the Lakhimpur Kheri massacre in Uttar Pradesh on October 3 this year.

“The relentless movement by farmers for over a year is an issue that we cannot undermine as citizens of this country. We were touched by the valid demands of the farmers. After the massacre at Lakhimpur Kheri, we felt like doing something to honour those who feed us. That is why we thought of inviting some of them to inaugurate our puja,” said Pankaj Trivedi, the secretary of the puja committee.

So, instead of political leaders or celebrities, farmers Suresh Mandal, Biswanath Ghosh, Mokail Sheikh, Uttam Roy, Intaz Mia, Meza Sheikh and others  stood in line to inaugurate the puja.
They cut the ribbon together and lit a “diya” one after another to mark the opening of the puja that will continue for next few days.

Each farmer was felicitated with flower bouquets, sweets and new clothes.
The farmers looked overwhelmed. “This is the difference between Bengal and Uttar Pradesh. There, farmers are killed and here, we are treated as envoys of the goddess,” said Suresh, a marginal farmer.

Uttam, another farmer present at the event, said the exorbitant hike in petrol prices have hit the farmers hard.
He added that he was praying for fuel prices to fall.
Puja organisers said Jagaddhatri is believed to be another avatar of Annapurna, the goddess who is believed to feed the entire world.
“These farmers are her true representatives. They have only one identity that they feed people, going beyond all communities and religions. That is why we thought of inviting them to the puja,” one of the organisers said.