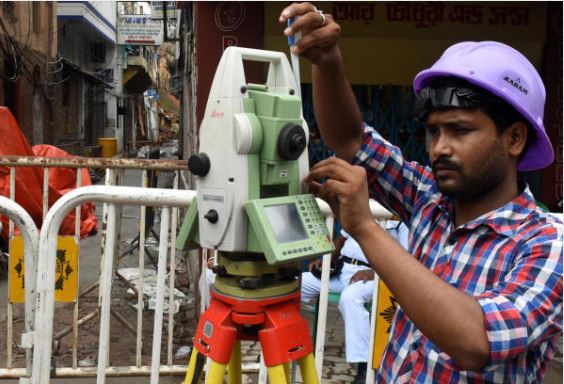 Samples of soil are being collected from the Bowbazar area that has been affected after a machine boring an East-West Metro tunnel hit a sand aquifer containing a large amount of water, leading to subsidence.

Engineers said an analysis of the samples would reveal how soft the soil had become after the accident and whether it would be able to bear further stress once the tunnelling work resumed and collapsed buildings rebuilt.

Kolkata Metro Rail Corporation, the implementing agency of East-West Metro that aims to connect Salt Lake Sector V with Howrah Maidan, started the exercise on Monday, the first of its kind since the collapse on August 31.

“Samples of the soil from this region in Bowbazar would be analysed by our soil experts,” said a KMRC engineer.

“The idea is to understand the degree of disturbance on the soil because of the accident underground and then calculate its stress-bearing capacity.”

A team of workers led by engineers set up conical structures in Gaur De Lane on Monday and used it to bore a pit underground with the help of a steel shaft. The shaft was thrust inside the pit using an iron pulley.

“After subsidence, we want to check the exact character of the soil on the surface and below,” an engineer said.

As workers went about boring, several residents who have been evacuated but who still keep returning to have a look at their houses, stood and watched the lane where they have been living for decades suddenly lose its character.

The mid-afternoon calm was replaced by the buzz of generator sets as engineers poured into their tabulation sheets with every sample of soil that was pulled out.

Engineers said that during tunnelling the impact on the surrounding soil was not limited to those near the tunnel alone but also in the adjoining areas.

Settlement of soil gradually decreases with the increase in the distance from the centre of the tunnel underground.

Over the last week a team of engineers has been checking the structural stability of some of the buildings across Durga Pituri Lane, Gour De Lane and Shakrapara Lane.

A separate team has been working on strengthening the foundation of some of the buildings by injecting a solution of sodium silicate and cement underneath — a process known as grouting.

After the soil test is completed, engineers said they would sit down and analyse the results to understand if more buildings were at risk in this cave-in zone.