In season of slowdown, festivity brings buzz back in city 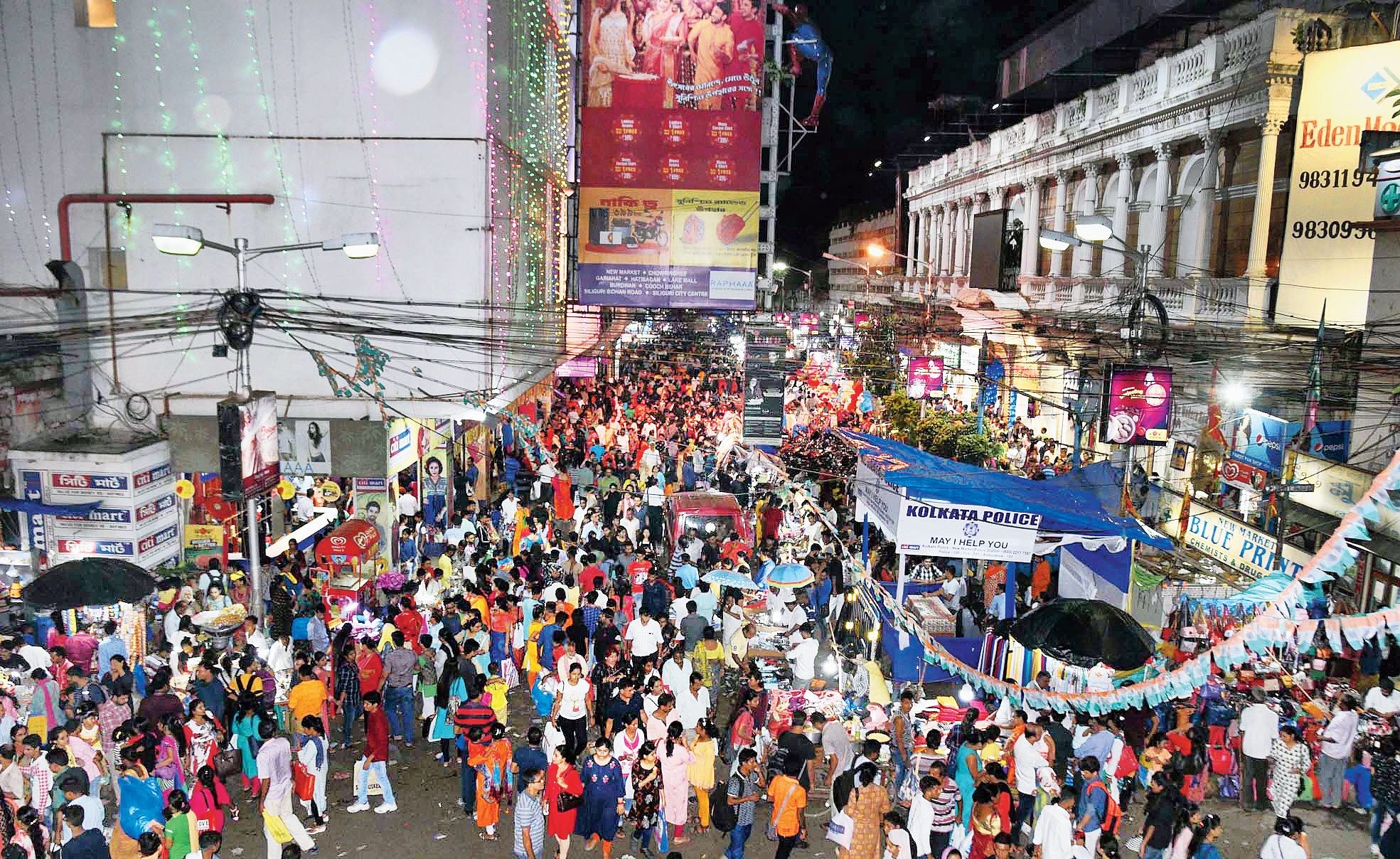 When it is time for the daughter to come home, you shop.

Less than a month to Puja, Calcuttans have set aside their concerns about an economic slowdown to gear up for the festival season ahead.

Space was the scarcest thing in Gariahat and New Market on Saturday. Hawkers called out to shoppers all along the footpaths lined with stalls. The traffic snarls stretched up to a few hundred metres.

Suchismita Das, 38, was among the shoppers in Gariahat said. The homemaker from Haridevpur said she was well aware of the economic slump because she managed the family expenses. “But this is the only time we gift clothes to relatives. We cannot stop that. I would much rather cut down on other expenditure,” she said.

The owner of a menswear store in Shree Ram Arcade said the crowd had started to surge since the past weekend. “I have had to hire a person to help me out during the festive rush. Even two months ago, this was unthinkable. I was literally swatting flies even on weekends.”

The owner of a home appliances chain is hoping this kind of bullish sentiment is not limited to the garments sector only.

His sales volume in August 2019 was 20 per cent lower than August 2018. But this month has just provided some breathing space. It is still worse than last year but the gap is narrowing.

The businessman attributed the slowdown to perception. The sentimental slowdown, he said, had hit the market harder than the actual slowdown and spooked by the fear of recession, people were not ready to spend.

“We are in a de-growth cycle. The festive season has shown the first signs of breaking this cycle,” said Pulkit Baid, the director of Great Eastern Retail.

“Cautious consumption is trending. The consumer is thinking that he is doing something wrong if he is not reacting to the fear of recession and curtailing expenditure.”

Daryani said his business had not gone south compared to last year. He said it was because his positioning was based on offering value for money and that was what the consumers were focussed on now.

“But the footfall in malls and restaurants has dipped,” said Daryani, who is also the head of the Calcutta chapter of the National Restaurant Association of India.

Value for money was something Saheli Chatterjee was looking for at New Market on Saturday evening. Chatterjee, 26, was done buying saris and was scouting for a place to eat. After some deliberations, she chose Blue Sky Café in Sudder Street over some fancier options.

“Shostae pushtikor (cheap and nutritious). If I don’t save now, eating out on the Puja days will take a hit,” said Chatterjee, a systems analyst with an IT services company.

Carmakers, meanwhile, have set their sights on September 20, when the Goods and Services Tax Council is set to meet in Goa. The automobile sector has been the worst hit by the slowdown and automobile players are desperately hoping that the council would cut the rates to revive the sector.

Puneet Anand, the senior general manager (marketing), Hyundai Motor India, said there had been several customer enquiries about the new launches across dealerships but hardly any deliveries. “If the rate is lowered at the meeting, manufacturers and dealers would go all out to ensure that the enquiries translate into purchases.”

“Onam and Ganesh Chaturthi have been much below par. Heavy rain in Kerala and the deluge in Mumbai made things worse. We are counting heavily on Navratri and Durga Puja,” he added.