The 700-seater auditorium of Priya Cinema did not have any fire-fighting measures and its design may come in the way of implementing the safety suggestions of the fire and emergency services department. 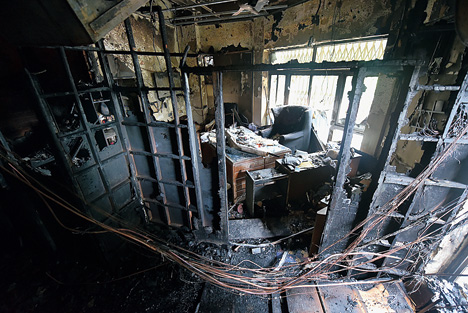 Deshapriya Park: The 700-seater auditorium of Priya Cinema did not have any fire-fighting measures and its design may come in the way of implementing the safety suggestions of the fire and emergency services department.

The fire department will hand a set of recommendations to the Priya Cinema management in a couple of days.

A fire broke out in the five-storey building on Rashbehari Avenue that houses the theatre while Fanney Khan was being screened on Sunday night. The cinema has been closed since.

The fire department wants the management to install smoke or beam detectors and sprinklers in the auditorium. It also wants the kitchens of the eateries on the ground floor of the building to have heat detectors.

"The detectors trigger an alarm if there is smoke or a fire breaks out," an officer in the fire services directorate said. "The cinema, which did not have any fire-fighting measures, will be allowed to reopen after the management implements all the safety recommendations."

Implementing the recommendations may prove to be an uphill task for the Priya management because of the design of the theatre, the owner of a standalone cinema in the city said.

"All old single-screen theatres have the same problem. Each such theatre has two tiers. Smoke detectors or water sprinklers hanging from the ceiling may impede the view of the audience on the upper tier," the owner said.

An officer suggested that the Priya management consider installing beam detectors, which are more sensitive than smoke detectors. "A beam detector installed near the ceiling can detect smoke at the floor level and trigger an alarm," the officer said.

Arijit Dutta, the owner of Priya Cinema, told Metro on Tuesday that the fire services department had given the auditorium a no-objection certificate in May.

"They gave us the certificate because we had complied with all their recommendations. The department gives us recommendations every year and we follow them.... No recommendation was handed to us after May. Tell me what is my fault? I have done what I was told to do," said Dutta, who lives with his family on the third and fourth floors of the building.

Fire department officers said the smoke detectors in the building - not in the auditorium - did not activate after the fire broke out.

Dutta had said on Monday that he had spent Rs 36 lakh on revamping the electrical system of the building one-and-a-half years back. The upgraded system helped contain the fire within his office, located on the first floor," he had said.

The interior of the cinema and the staircase was unaffected by the fire, this newspaper had found when it went inside the building on Monday.