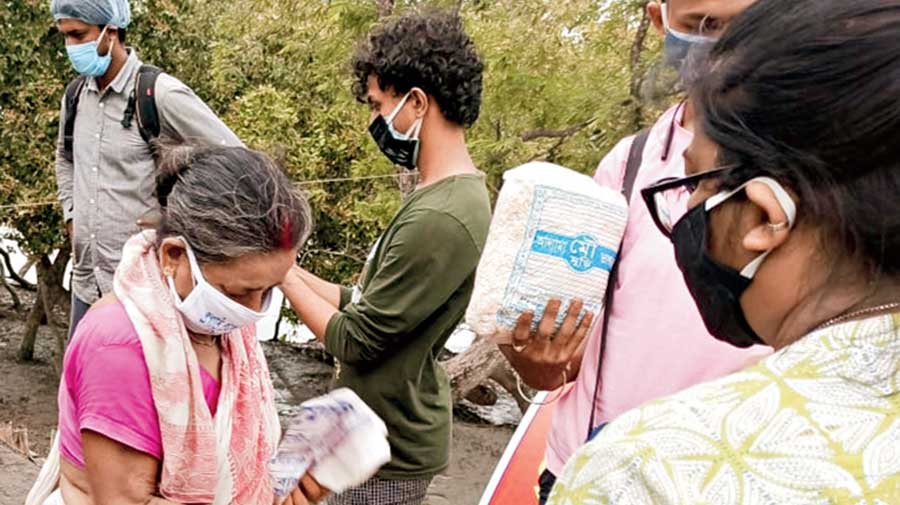 An elderly woman keeps a water pouch in a bag after receiving it from a relief team on remote Bholakhali island on Monday.
Pashupati Das
Snehamoy Chakraborty, Subhasish Chaudhuri   |   Calcutta   |   Published 02.06.21, 01:10 AM

Floods triggered by Cyclone Yaas have led to drinking water shortage at several places in coastal South 24-Parganas, North 24-Parganas and East Midnapore, with most sources of drinking water remaining submerged for almost a week since last Wednesday’s cyclone.

As tube wells, pumping and boosting stations are submerged and ponds flooded by saline water, signs of Coleridge’s immortal lines, “water, water everywhere, nor any drop to drink” are clear.

“We have been living without electricity and water since last Tuesday, May 25, a day before Yaas. We are surviving on food supplied by the local administration but to get water we have to travel 3km,” said Abdus Salam Gazi of Hingalganj’s Kadakhali in North 24-Parganas.

While Gazi and his neighbours are trekking 3km every day for drinking water, villagers in Hingalganj’s Mahmudpur lost patience and staged a demonstration on Monday demanding adequate water supply in their village.

To address these concerns, the state government’s public health engineering department has been supplying water but angry villagers say the gap between demand and supply is huge, especially in remote areas.

A public health engineering official admitted to the shortage of water but said it was difficult to start restoration work since several areas remained under water.

“We can’t restore water supply until the water level recedes. We have to repair several pumping and boosting stations and at the same time clean pipelines clogged with dirt,” a senior office of Irrigation department said in Calcutta.

However, the PHE official claimed that water pouches are being distributed through the panchayats on doorsteps.

“We supply at least 50,000 pouches regularly in every gram panchayat area. At the same time, we have allowed people to collect water from our packaging units. The pouches are handed over to the panchayat officials for distribution since we have limited manpower,” said an irrigation department official.

“In the entire Sunderbans, we have been trying our best to supply safe drinking water so that people in the affected areas do not suffer from water-borne diseases,” the official added.

The district officials of North 24-Parganas admitted that the demand for water pouches was high but refuted allegations that the administration was not doing enough.

On Monday, a team of the district administration visited Bholakhali island for the first time six days after the cyclone.

“We took a boat full of water pouches and dry food for villagers,” an official said, adding the island remained inaccessible.

Officials of the PHE and local sources said a long stretch of water supply pipelines in the region had been damaged by the cyclone. Since the area is surrounded by rivers attached to sea, saline water gushed into the villages during the high tide by breaching the embankment. The tidal wave damaged many pumping and boosting stations as well as tube wells that are still under water.

A PHE official in Basirhat admitted to scarcity of water.  “Water crisis is there in many places from damage to supply lines caused by broken embankments. We are supplying water pouches and drums to affected areas.”