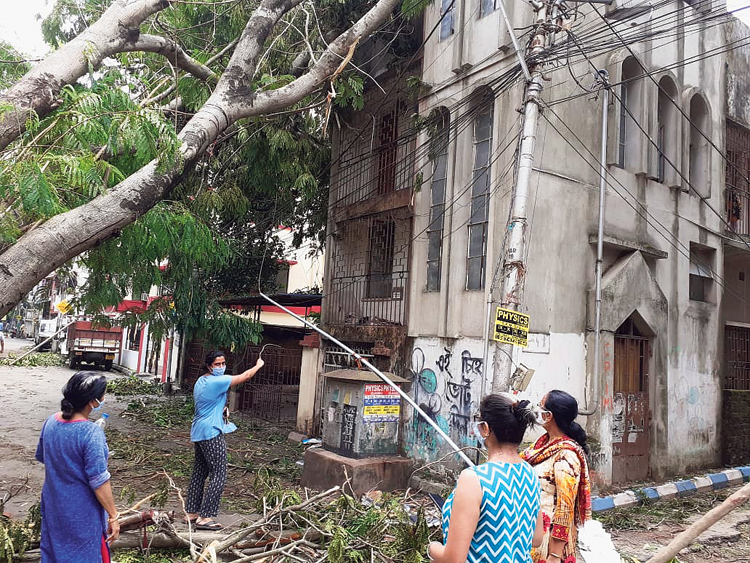 Vijaylakshmi Dubey, a resident of Suryanagar near Bansdroni, along with her mother Ratna Dubey and some of their neighbours, points to a tree that crashed on the wires in front of their home on Wednesday when the cyclone struck.
Pictures by Subhankar Chowdhury
Subhajoy Roy   |   Calcutta   |   Published 22.05.20, 10:04 PM

Reports of multiple problems fuelled by power outages poured in from places like Survey Park, Garia, Bansdroni, Behala and Uttarpara. Protests broke out at Broad Street and Kasba.

A CMC official present at the meeting said Hakim asked civic officials to use the services of the National Disaster Response Force (NDRF) teams present in the city. The teams were not engaged in the work till Friday afternoon. They were inducted only later in the day.

Till then, only teams of the civic body were doing the work. 'The NDRF teams have cranes and their members are better trained to cut long trees and then chop them. They have better equipment too,' said a CMC official.

The CMC's teams have a few power saws and eight hydraulic ladders to cut the trees.

A CMC official said late on Friday that the tree removal work had been delegated to three different teams, dividing the nature of the task based on infrastructure available with them.

The NDRF personnel have been asked to focus on tall trees that have got uprooted but are leaning on buildings or leaning in a way that their removal is a precarious task. The CMC will also look at hiring private agencies to speed up the work.

An official associated with disaster response wondered why it took two days for the CMC to figure out that 'trees that hinder electricity restoration should be given priority. 'Trees blocking main roads and those that do not allow restoration of electricity should be removed first,' he said, wondering whether this is not elementary.

At least 36 hours after the cyclone blew over, a coordination meeting involving power utilities was held at the headquarters of the Calcutta Municipal Corporation (CMC) to prioritise trees that needed to be removed at the earliest to restore electricity supply to large parts of the city.

Uprooted trees have emerged as the biggest hurdle to putting normal life back on track in Calcutta and adjoining areas after Cyclone Amphan struck on Wednesday.

Those familiar with disaster response said such a meeting involving officials from power utilities should have been convened at least once before the storm struck the city and again on the morning after the storm.

But the CMC authorities appeared to have woken up only on Friday to the enormity of the disruption in normal life, which has forced several Calcuttans to pick up axes and similar tools to try and remove the uprooted trees by themselves.

Engineers of power utilities have claimed off the record that they were not being able to work on restoring electricity supply as fallen trees blocked access and prevented them from repairing or replacing damaged or snapped cables.

According to CMC officials present at Friday's meeting, Firhad Hakim, the chairman of the CMC's board of administrators, told them to accord priority to removing trees that were hindering restoration of power supply.

Hakim asked the officials to see that the trees were removed from the major thoroughfares and from important locations by Sunday.

'Calcutta police will give us a list of places where trees have fallen. We will be in touch with the power utilities and first remove the trees that electricity companies say need to be removed to restore power supply,' said a CMC official.

The meeting came two days after the storm smashed through Calcutta, uprooting at least 6,000 trees and 4,000 electric poles.

Angry residents hit the roads in various parts of the city on Friday. In most places, they blocked roads. In some places, they tried to remove the fallen trees. They had no power and no water for over 48 hours. Mobile phones were dead. 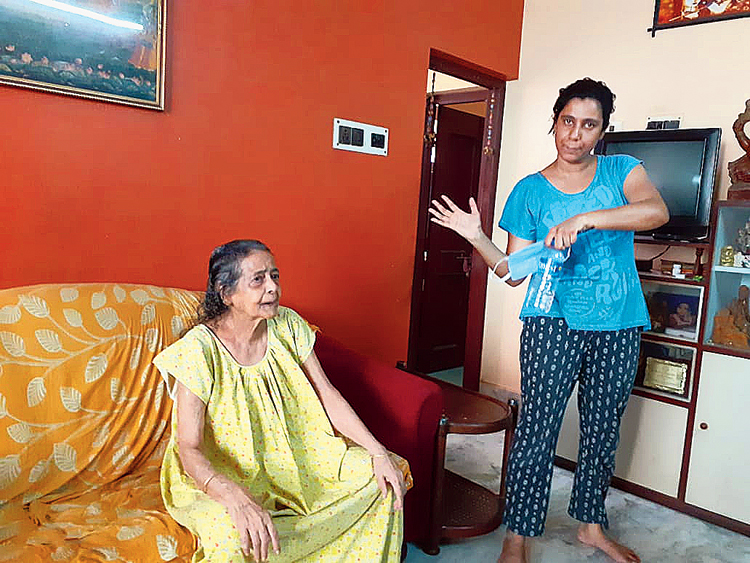 Rita Goswami (left) with her granddaughter Vijaylakshmi Dubey. The wires landed on the Dubeys’ verandah. Vijaylakshmi and her sister Anushka had to bodily lift their grandmother, Rita Goswami, 81, and shift her to a relative’s home close by as they feared that their house would be electrified because of the invading wires
Calcutta Municipal Corporation (CMC) Firhad Hakim Cyclone Amphan
Share
Advertisement
Advertisement
Advertisement
Copyright © 2020 The Telegraph. All rights reserved.