Advertisement
Home / West-bengal / Crusade against a curse, frame by frame

Crusade against a curse, frame by frame 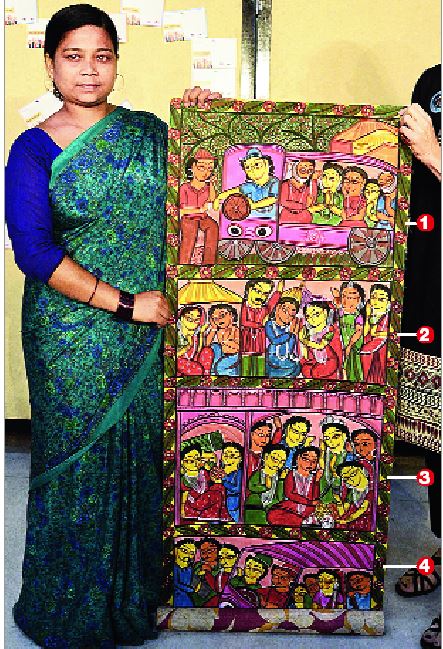 Mamoni Chitrakar, a 30-year-old artist from Naya village in the Pingla block of West Midnapore, on Friday presented through a song and her patachitra (scroll painting) the predicament of young women in large parts of Bengal who are often trafficked after being lured into a dowry-less marriage.

Mamoni sang with the scroll in her hand at the inauguration of a Women’s Empowerment Fair at the American Center in support of the fight to end human trafficking and gender-based violence.

“My mother has composed the song and based on that, I have depicted the plight of women and how they become easy targets. We go around nearby villages, sometimes commissioned by the administration, to raise awareness about trafficking,” Mamoni said.

Mamoni later narrated to The Telegraph the story depicted on the scroll, frame by frame:

1 A driver is given money as he ferries a group of girls in a bus. Gagged and hands tied, the girls are seen huddled together

2 Parents worrying over the birth of a daughter and her marriage prospects are promised by a boy that he would marry the girl without a dowry. The parents are happy and marry their daughter off to him

3 After the wedding, the husband showers gifts on the wife and treats her to good food

4 The son-in-law comes back to the girl’s village with his friends. The impressed villagers decide to marry their daughters off to the groom’s friends. The girls are chained and put in a bus to be trafficked

5 An announcement over the mic asks the villagers to alert police if they see these men. The groom is captured

6 The police (in brown clothes) capture two more men who had trafficked girls from the village.