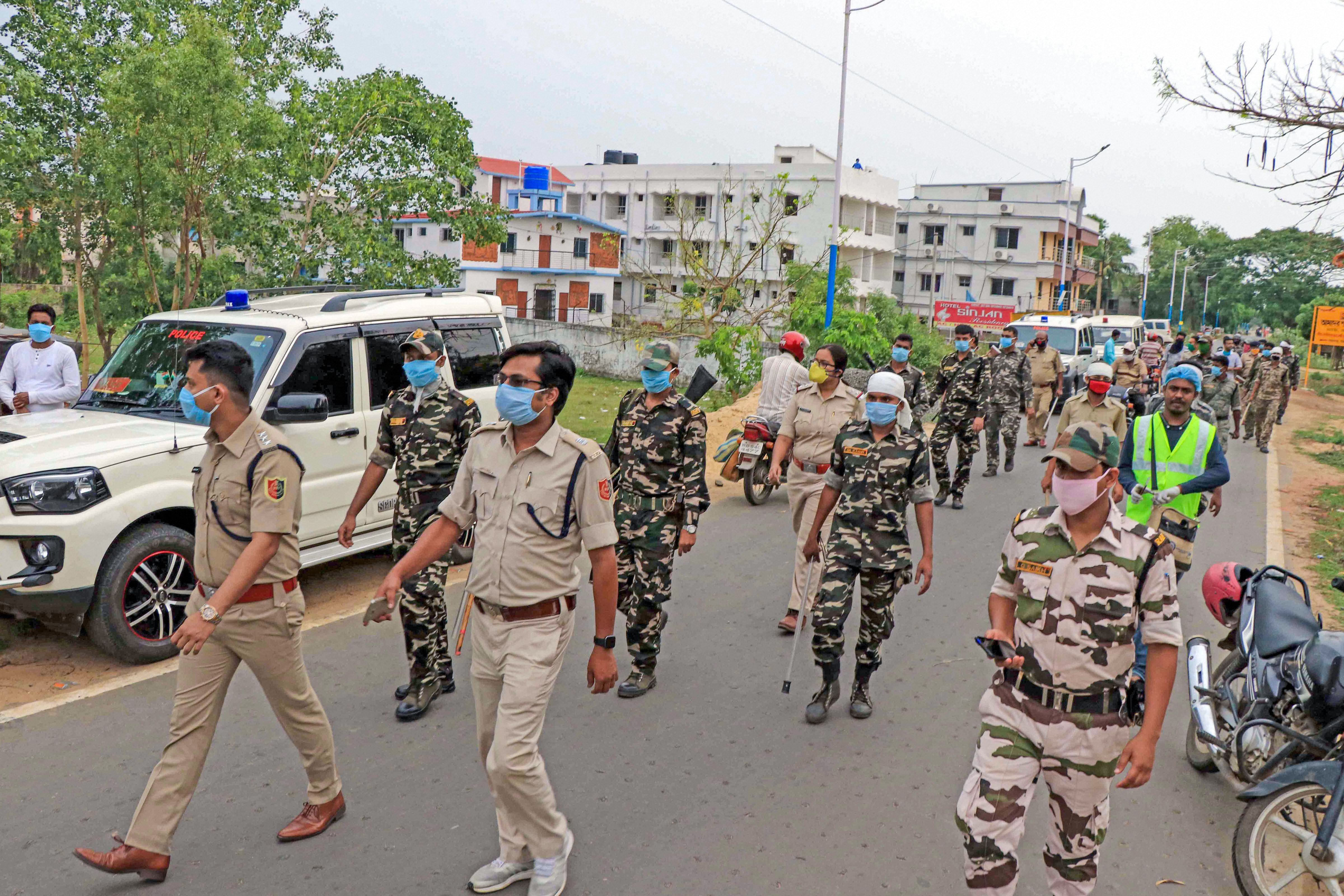 Security forces personnel try to control the situation after a protest by the residents of Goalpara village against setting up of a quarantine centre for COVID-19 suspects in their village, in Birbhum district, Friday, May 1, 2020.
(PTI)
Snehamoy Chakraborty   |   Bolpur(Birbhum)   |   Published 01.05.20, 07:51 PM

On a day the Centre released its contentious list that marked 10 Bengal districts in the red zone, Birbhum and Alipurduar lost their green-zone status as seven Covid positive cases were reported from the two districts late on Thursday.

Three persons from Birbhum’s Mallarpur, including a 52-year-old woman and a cancer patient who had returned from Tata Memorial Cancer Hospital in Mumbai last week, were tested positive.

Officials said in keeping with the state government’s announcement, the administration in the two districts was preparing to resume bus services from Monday and many were planning to reopen shops. “Those facilities of green zones will not be implemented anymore,” said a cop.

Officials said the trio, belonging to the same family, had hired an ambulance after getting permission to reach home in Birbhum from Mumbai for Rs 70,000. They were quarantined at a government shelter after villagers refused to allow them in. They were later sent to a hospital in West Burdwan for treatment.

“The district is no more a ‘green zone’ after emergence of Covid positive cases. The trio did not come in contact with many people as they were stopped before entering the village,” said a senior health official.

“We have traced 30 persons who have came in close proximity with the trio and kept them at a quarantine centre in Rampurhat. We will find out if there are more who had come in contact with them,” said an official.

In north Bengal, Alipurduar is the fifth district to report corona positive cases that forced it out of the green zone. “Four positive cases have been reported in our district. All of them had been to the AIIMS in New Delhi and returned in an ambulance. They have been sent to the Covid hospital in Siliguri,” said Puran Sharma, the chief medical officer of health, Alipurduar.

Sources in the health department said the quartet had reached Alipurduar district and were kept at a quarantine centre in Barobisha.

“In total, there were five persons who had travelled in the ambulance from Delhi. Of them, three are residents of Jorai in the neighbouring Cooch Behar district that is adjacent to Barobisha, while the other two are from Kamakhyaguri and Barobisha,” said a source.

The fifth person, a minor, is at a quarantine centre. He is suffering from renal problems.

At Kamarhati’s College of Medicine & Sagore Dutta Hospital, 20 doctors and 16 other employees, including six technicians of the radiology department, were quarantined after two housekeeping staff members tested positive for Covid-19 .