Kota students back in Bengal 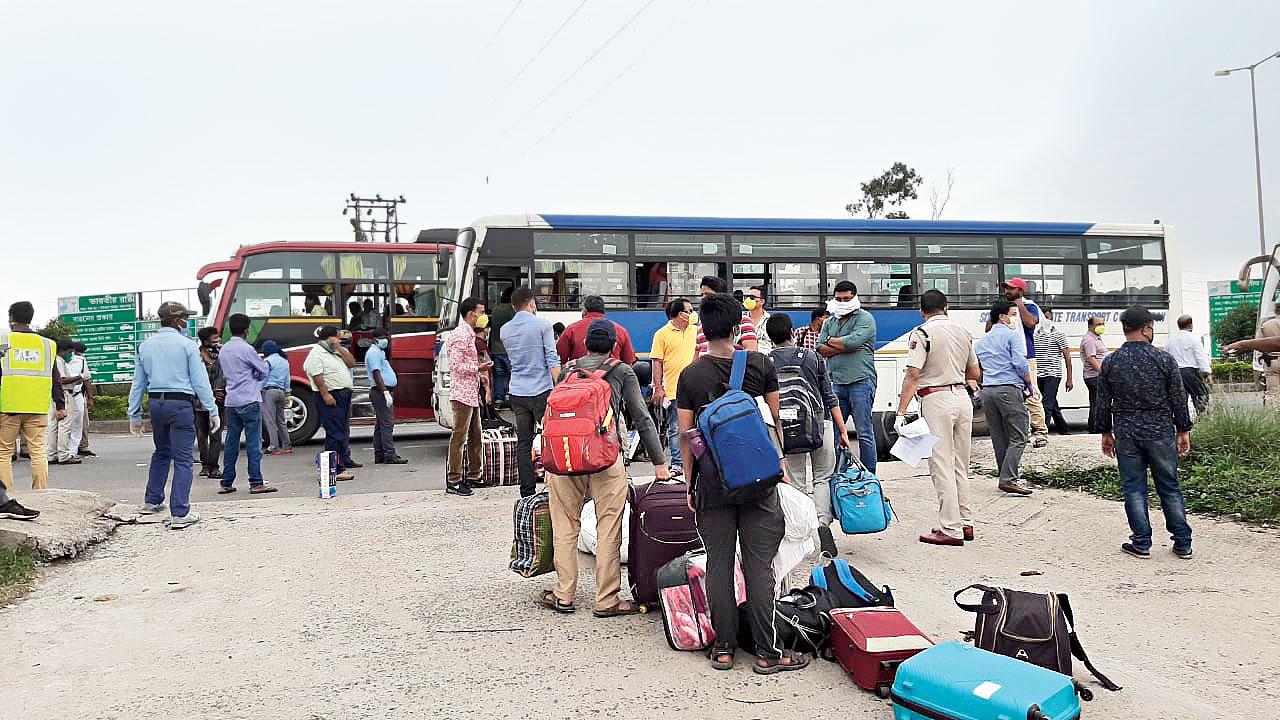 Some students in Durgapur on Friday after their return from Kota.
Picture by Swapna Barua
Abhijeet Chatterjee And Binita Paul   |   Durgapur   |   Published 01.05.20, 07:50 PM

Nearly 300 buses rolled into several parts of Bengal on Friday carrying around 3,000 students and their guardians, who had been stuck in Kota, Rajasthan’s educational hub, ever since the nationwide lockdown was imposed in March.

Bengal chief minister Mamata Banerjee, whose government had initially ruled out bringing back the stranded students, did a U-turn a couple of days after Congress MP Adhir Ranjan Chowdhury had issued a public appeal seeking her intervention.

The Behrampore MP had said Rajasthan chief minister Ashok Gehlot had told him that the students could be transported by his government to the Bengal border, after which the Bengal government had to get them home.

Nearly 130 buses carrying 1,700 students and guardians for 13 south Bengal districts were received by officials of the West Burdwan district administration at Asansol on Friday. The administration had set up centres in four hotels in Asansol and Durgapur where the students were given refreshments, served lunch and made to go through medical check-up before sending them to their respective districts.

“We received them during their stopover in Asansol as West Burdwan is the gateway to south Bengal from north India. They were sent home in state government buses,” said Sukesh Jain, commissioner of police Asansol-Durgapur.

Sources said the buses had left Kota with the students and their parents on April 29 to reach Asansol after covering a distance of 1,500km.

Asansol mayor and Trinamul West Burdwan president, Jitendra Kumar Tiwari, spoke to the students and their parents and enquired about their health.

However, a group of villagers of Goalpara in Birbhum’s Santiniketan protested against accommodating 67 students, who had returned from Kota, at an old-age home.

Police sources said the administration had planned to quarantine the students from Birbhum at the old-age home to collect their swab samples. Following the agitation, the students were taken to Rampurhat, 64km from Santiniketan.

Another group of around 784 students from various north Bengal districts reached Siliguri in 27 buses from Kota on Friday.

Tourism minister Gautam Deb welcomed the students along with senior officials of Siliguri Metropolitan Police and Darjeeling district administration. Deb said 30 buses would ferry the students to their homes in districts such as Malda, South Dinajpur and Cooch Behar.

“Students from Darjeeling district will be taken for primary health check-up before they are sent home,” Deb said.

Sources said all the students had to register their names with their addresses and would have to stay in home quarantine for 14 days, while health officials of the respective districts would monitor their health conditions, said sources.

Malda student Mimi Mondal said they had faced problem to get food in Kota as the markets were sealed. “We are glad that our state government took the initiative to bring us back home,” she said.