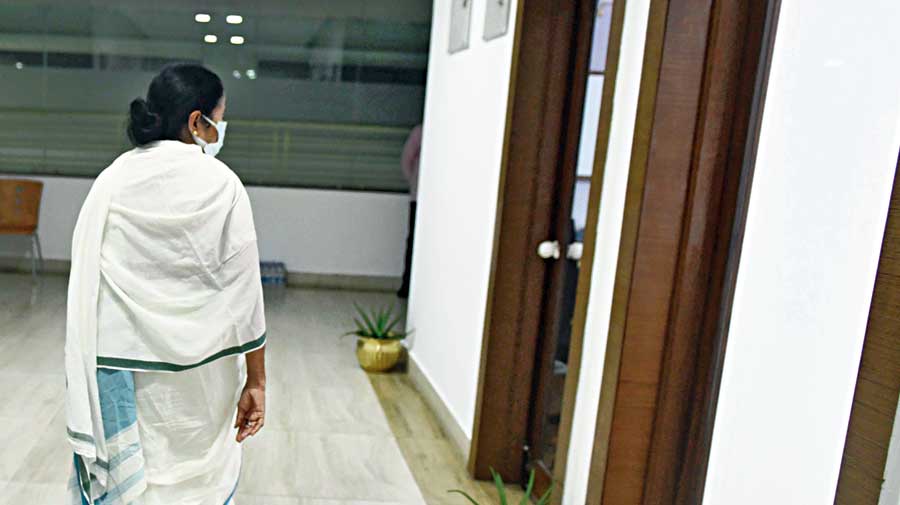 Chief minister Mamata Banerjee on Tuesday said she’d stay overnight at state secretariat Nabanna with the top-tier bureaucracy to keep tabs on Cyclone Yaas from a war-room of the disaster management department.

Mamata reached Nabanna around 11.45am. Around 3pm, she convened her first news meet, by when she had spoken to district magistrates of areas most likely to be affected.

Mamata was concerned about the high tide. “You can see a high tide, and thus the water level of the Hooghly and other rivers has also risen…. The seawater at Digha has come up to the public places….” she said.

Around 11 lakh people have been evacuated to the 4,000-odd relief shelters, she said.

For Amphan, 10 lakh had been evacuated.

This time, over 74,000 officials and workers have been deployed to tackle the situation, besides another 3 lakh personnel from the police, the army, and the national and state disaster response forces.

Mamata said one senior IAS officer has been given the responsibility of each district.

Sources said three senior IPS officers and one senior IAS officer have been deployed for East Midnapore — likely to be the worst-hit district — alone. Of the total 11 lakh evacuees, four lakh are from this coastal district. Two ministers, Akhil Giri and Somen Mahapatra, are stationed at Digha.

Governor Jagdeep Dhankhar visited Nabanna. BJP state unit chief Dilip Ghosh, a known Mamata-baiter, even issued a statement in appreciation of the state’s efforts.“The state government was unprepared last time. This time, however, it appears to be equipped and ready. Now, it is up to them to deal with the cyclone,” he said.