The evidence of guns that smoke no more 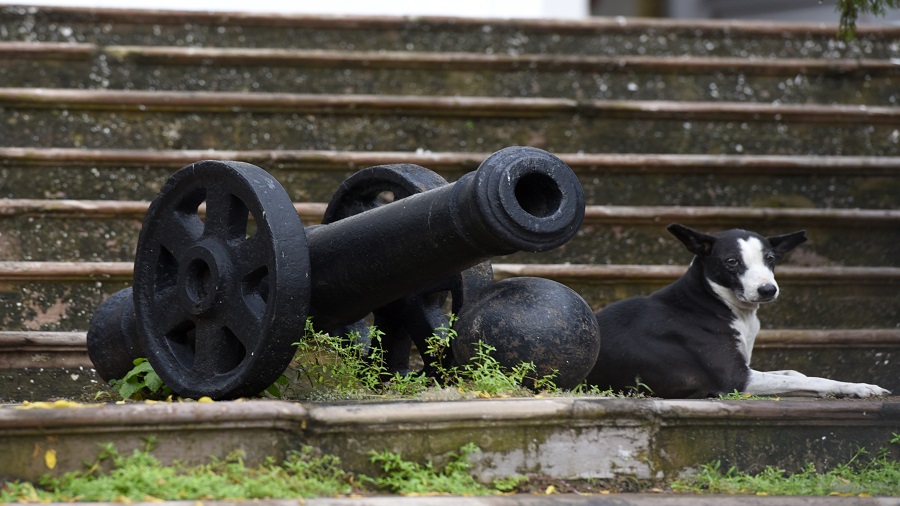 Civic workers had discovered the cannons in 2010 when they were laying water pipelines near Mayo Hospital on Strand Road. Thereafter, the then councillor of Ward 21, Ajoy Saha, had them transferred onto the footpath of Maharshi Debendra Road. The citizens’ group, Purono Kolkatar Galpo (PKG), however, demanded a more lasting arrangement and one that befitted the historical value of the duo. “We kept appealing to Saha to restore them. We even organised a walk demanding the cannons be displayed properly,” says Jayanta Sen, who is a member of PKG. Finally, on the initiative of Saha and current councillor Sujata Saha the cannons were cleaned, mounted on a white marble slab and inaugurated with much fanfare in September 2019.

The Armstrong-Frederick and Bloomfield are light British gun models that were used throughout the Indian subcontinent between the mid-18th and mid-19th centuries.

From the 16th century on, gun design was centrally controlled by the Board of Ordnance in England. Its principal office holder was the Surveyor of the Ordnance. John Armstrong and Charles Frederick, both had occupied the top post. The model named after them bears imprints of their design modifications. It remained in production from 1760 to 1786.

The Bloomfield pattern, which came after and remained in production till 1860, is named after Thomas Bloomfield,  who became inspector of artillery in 1780. It has a loop through which a thick rope can pass. “When it is fired, the recoil is violent. To check it, a rope was tightly fixed to something,” explains Amitabha Karkun, who is an expert on cannons and old firearms, at a recent talk on the cannons of West Bengal organised by the Indian Museum on social media.

Why should we care about cannons now? “Because they tell us something about the technological and metallurgical expertise of a certain time. We also get an idea about the availability of resources and the progress of science,” Karkun tells The Telegraph. 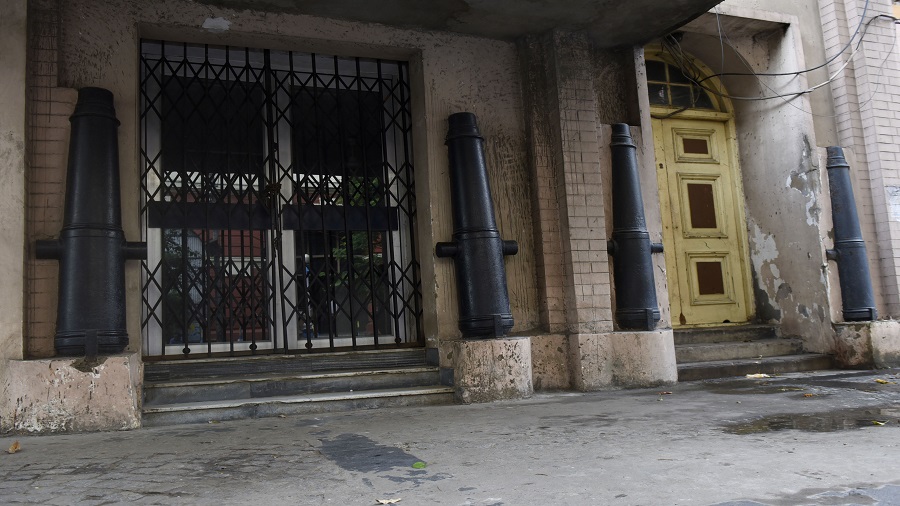 Experts claim the cannons of Bengal can be roughly segregated as pre-Mughal, Mughal and Indo-European types. “Gunpowder,” clarifies Karkun, “was pre-Mughal”. Pre-Mughal cannons belonged to the Husain Shahi dynasty, Sher Shah Suri, and even the Bara-Bhuiyans who used them to resist the Mughal expansion.

Each cannon type has its own distinctive structure and design. “Pre-Mughal cannons have geometric ornamentation on them, while the Mughal ones have floral patterns. British and French cast iron cannons are devoid of any such design,” says Karkun. “They are not just tools of war but also evidence of history,” he adds.

Calcutta has a wealth of such evidence. There is the Chinese cannon mounted on a winged dragon right in front of the Raj Bhavan. According to the inscription on it, it was taken from the Chinese in 1842 in commemoration of peace “dictated under the walls of Nankin by the naval and military forces of England and India”. Fort William, the headquarters of the Eastern Command, has 73 cannons. The most important of the lot is possibly the tope Zafar Baksh that was manufactured during Aurangzeb’s reign in the mid to the late 17th century. The precincts of the Indian Museum have nine cannons belonging to various eras right from the 16th to the 19th century. The Asiatic Society has a cannon that once belonged to the artillery of Assam rulers. And the premises of the Tipu Sultan mosque have 18 cannons.

But one of the earliest cannons in these parts happens to be not in Calcutta but in Murshidabad. The Bachchawali tope stands in front of the grand Hazarduari Palace. In the 1905 book, The Musnad of Murshidabad, Purna Chandra Majumdar writes that the gun was most likely manufactured between the 12th and 14th centuries by the Muslim rulers of Gaur. Majumdar observes, “It rested originally on the sandbank adjoining Ichhaganj (how it came there is not known), protecting the city from attack from the northwest.”

Bachcha means child. Bachchawali means “one with child”. There is more than one story about how this cannon came to be so named.

While some say it produced such a loud noise upon being fired that pregnant women went into labour, Majumdar writes, “It is said that the gun was once fired in Murshidabad and the sound produced many cases of abortions for miles around. Hence, its name.” Karkun believes the name has to do with its gunpowder chamber. He says, “This is the only cannon in eastern India having such a unique forge welded construction with a separate removable gunpowder chamber, much like a bachcha.” 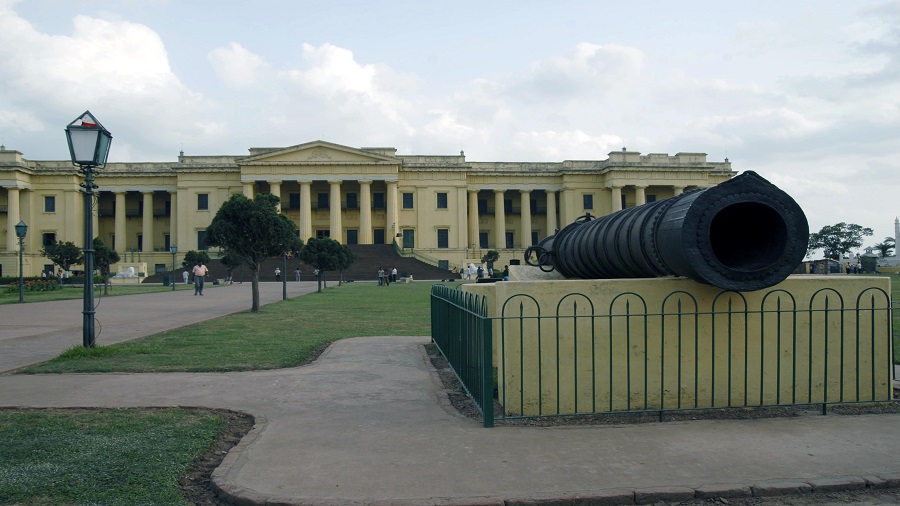 The other treasure of Murshidabad is the Jahankosh. This cannon, built by the expert artisan Janardhan Karmakar during the reign of Shah Jahan and weighing 7,900 kilos, was found embedded in a peepul tree. The tree had grown around the cannon and lifted it up as it grew. Years later, the peepul was cut down and the gun was brought to what used to be the topekhana or artillery yard of the Nawab of Murshidabad. Says Karkun, “The cannon is 7-feet 6-inches long. The bore measures 6 inches. Every time the gun was fired, it had to be loaded with 26 kilograms of gunpowder.”

Neighbouring Bishnupur is home to Dalmadal; the original name is Dal-Mardan, which means “crusher of people” in Persian. It was manufactured between 1600 and 1700. It is one of the earliest wrought iron forge welded cannons of India. There was a Persian inscription at the touch-hold end that read “one lakh twenty five taka” — possibly the cost of making the cannon. Karkun knows this from archival pictures; currently the inscriptions on the Dalmadal have been obliterated as a result of constant touching by tourists, just as in the case of Jahankosh.

And, back to Calcutta.

BBD Bag. 2 Red Cross Place. Three cannons stand at attention at the entrance to an office. “This used to be the showroom of the famous gun dealer, R.B. Rodah,” says Karkun. These cannons look like Congreve (named after Captain William Congreve) medium cannons used by the Royal Navy, but shorter in length.

According to records, the first casting of such guns happened in 1830. Their size made them easy to fire from ships, but eventually, unhappy with their heavy recoil, the Royal Navy discarded them. The ships of the East India Company, however, continued to use them.

The Red Cross Place cannons possibly came from such ships.

But no cannon in the city has been so footloose as the one that currently adorns the entrance to Town Hall. The 18-mm Krupp gun is a legacy of the Second Boer War (1898-1902). After the British defeated the South African Republic and the Orange Free State, it seized their armaments. This cannon of German make was part of the booty and presented by the British crown to the Calcutta Corporation in 1905. It was meant to be a tribute to Indians who had participated in the war as a non-combatant force. The cannon was kept in the main tower block of the central building of the Calcutta Municipal Corporation till the mid-1960s. At the time of the Indo-Pak conflict in 1965, it was shifted to Market Square (now Chaplin Park), opposite the headquarters of the civic body. Next, it moved to New Market. And there it stood in the centre of things, a North Star for lost souls. In 2006, the authorities decided to move it to the Town Hall for better upkeep and preservation after one of its wheels came off, an aftermath of too much affection and attention showered onto it by the urchin gaggle.