INSIGHT: A new book recounts the shots at Plassey, the shots that were to clear the way for the empire 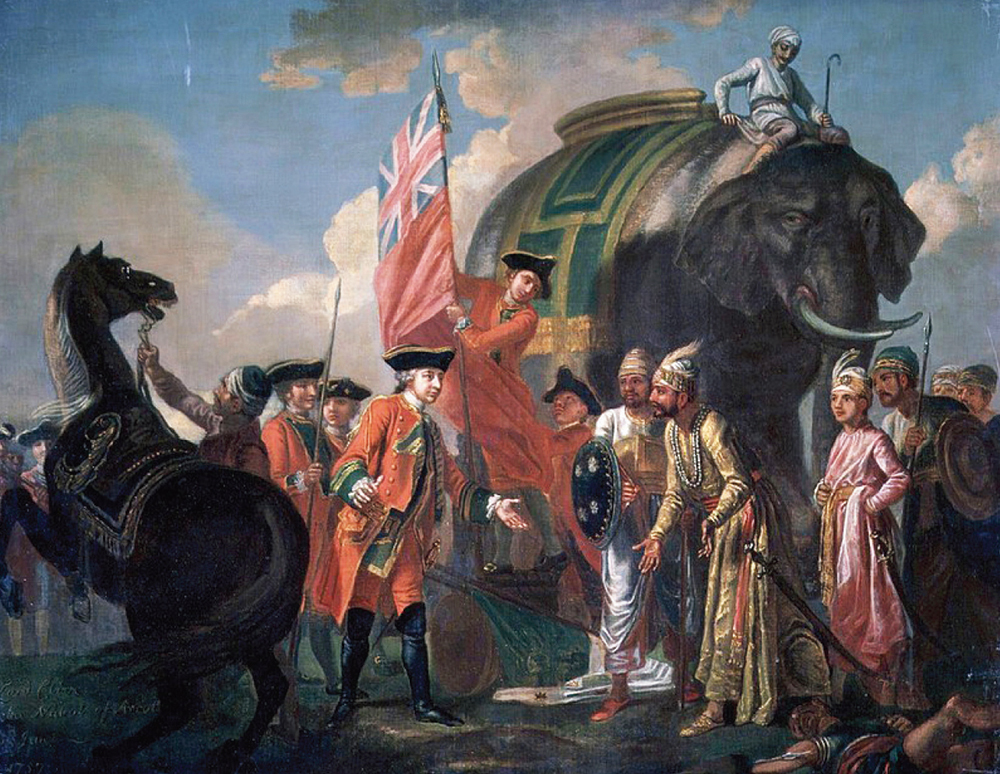 A painting depicting the meeting of Mir Jafar and Robert Clive after the Battle of Plassey
Courtesy: ‘PLASSEY — The Battle that Changed the Course of Indian History’
Sudeep Chakravarti   |   Published 11.01.20, 08:12 PM

A battle begins differently for different people. “It was on a Thursday, the fifth of Shevval, in the year 1170,” the Siyar [the book Siyar-ul-Mutaqherin] heralds the battle with a flourish, “and there the fire of battle and slaughter, that had been hitherto kept alive under a heap of embers, now blazed out into flames.” “23rd June 1757”, Coote’s journal is dispassionate, like a captain’s log. “Soon after daybreak in the morning,” — another account, by an anonymous Company source, marks the time as 7am — “discovered the Nabob’s Army marching in two lines towards Plassey grove, which we were in possession of as if they intended to surround us, upon which we formed the line a few paces without the grove…”

…The first shot was fired at 8am. It came from Siraj’s forces grouped on the tank, and drew first blood. Orme writes that “it killed one, and wounded another of the grenadier company, which was posted on the right of the battalion.”

An anonymous but “endorsed” account in [Samuel Charles] Hill’s Bengal recorded six days after the battle, claims that opening shot came as a surprise — because, according to the intelligence received “the enemy” had “no cannon with them”. Strange as this may appear, as the British were fully aware of Siraj’s arsenal, the illusion was dispelled with that shot soon after Clive’s troops had formed up in front of the grove: “We were scarcely drawn up in this manner, when a 24lb. shott from their camp, bounding along, and carrying off the arm of one of the King’s granadiers, convinced us that their cannon was come up.” This acted as a signal, and the rest of Siraj’s artillery on their mobile stages opened up, raining shot on Clive’s force — in a “continual fire”, Orme notes. The two small cannon by the brick kilns retaliated along with other British artillery but they fell short of the nawab’s heavy artillery. The shots did kill and injure many in Siraj’s infantry and artillery, but “ten for one killed [of the British], was no advantage in such a disparity of numbers”. Because, even though more than two-thirds of Siraj’s force wouldn’t pitch in, it was still a ratio of 3:1 for Siraj’s active forces against Clive’s, besides a clear superiority with artillery. It showed. Although “most” of the shot had flown high above the British force, at the end of the first half an hour of such bombardment ten European soldiers and twenty Company sepoys lay dead.

Clive had seen enough. He gave orders for the troops to pull back and behind the embankment of the grove. “[They] began to cannonade so briskly that it was advisable we should retire into the grove,” recalled Coote, “where we formed behind the ditch that surrounded it, our left being covered by Plassey house which was close to the river side.” This little retreat energised Siraj’s loyal commanders. Their heavy cannon were nudged closer to the grove by the great teams of bullocks — the anonymous account describes the scene: “…their whole front was almost covered with the bullocks that drew them.” The intensity of fire increased. To little effect, as it happened. “Their shot only struck the trees,” Orme tells us, “for the troops were ordered to sit down, whilst the field-pieces alone answered the enemy’s cannon from behind the bank. Explosions of powder were frequently observed amongst their artillery.” Siraj’s forces had decided to wait it out, working the equation of attrition, wearing out the British with cannon, instead of charging with cavalry and infantry and being susceptible to fire from entrenched, protected British positions at the grove.

Siraj-ud-Daulah
Courtesy: ‘PLASSEY — The Battle that Changed the Course of Indian History’

At 11am Clive consulted his officers, and decided to adopt the tactics he had used during the retaking of Calcutta from Siraj. British forces would “maintain the cannonade”, limited but consistent, through the day, as most of his troops lay in the shelter of the grove. Then, at midnight, they would “attack the Nabob’s camp”. (Coote offers a perspective different than Orme’s. He writes of a consultation around noon: “In this situation we cannonaded each other till 12 o’clock, when the Colonel came from Plassey house and called the captains together in order to hold a council of war, but, changing his mind, returned without holding one.” Either way, it shows things were somewhat chaotic in the British camp.)

That’s when the weather intervened — it would have happened soon after Clive’s abortive council of war that Coote mentions. Even after knowing the lay of the land and the weather at that time of the year, Siraj’s fighting generals and cannoneers had made a fatal error. They discounted the monsoon. Clive had gained an advantage with the retreat into the grove: his forces were outnumbered and outgunned, but they had cover from rain, their stock of gunpowder kept mostly dry through that cover, and also from the caution of covering the powder. “About noon a very heavy shower covered the plain, and very soon damaged the enemy’s powder so much, that their fire slackened continually,” Orme continues, “but the English ammunition served on.” The anonymous account dated June 29 in Qasimbazar (and included in Hill’s volumes) endorses this: “About 12 a heavy shower of rain came on, we had some apprehension that the enemy would take advantage of this opportunity, and make a push with their horse, but our guns continued to play very briskly, prevented any such motion. The enemy’s guns during the rain which lasted half an hour did not fire a shott.” All through this the forces of Mir Jafar, Yar Latif and Rai Durlabh stayed where they were with their generals, calculating bystanders, watchful, not interfering. It isn’t difficult to visualise how the situation might have both Siraj and Clive on edge, mulling over the similar questions but with opposite implications. Would they join the battle? If so, on whose side? Why weren’t they joining the battle? Had they double-crossed — from Clive’s perspective?

The British plan for military operations in Calcutta
Courtesy: ‘PLASSEY — The Battle that Changed the Course of Indian History’

“All this while Mirdjaafer-qhan, the author of all these evils and troubles, contented himself with standing at a distance with the troops under his command, exactly like one who had come only to see the engagement,” the Siyar employs an uncharacteristically sympathetic tone towards Siraj at this point, “although his sole aim was to effect Seradj-ed-doulah’s downfall”. Clive remained greatly concerned, but there was one consolation, such as it was. If the conspirators weren’t visibly with Clive, at least they were visibly not against him either. Siraj, of course, remained concerned with good reason, and with his suspicions yet again confirmed after four hours of battle. If three of his key commanders had not moved from their position across the right flank of Clive’s troops, from where they could have swept in after softening up the British with artillery and rolled over the grove through sheer numbers, they were definitely against Siraj. (Orme, unsurprisingly, has a pejorative take on Siraj who, like many rulers, remained in the background, and had his generals execute the battle, that “the Nabob had remained in his tent out of the reach of danger, continually flattered by his attendants and officers, of whom one half were traitors, with assurances of victory”. There is little indication of such flattery, only of a desperate nawab leaving the battle to his loyalist generals.) The cannonading between both forces continued, but with a difference. Seeing the efficacy of their cannon diminish, Mir Madan and Mohanlal with their troops moved gradually towards the grove. Focused cannon fire from the grove continued to pick off their troops but this hardly proved a deterrent: they knew they had superior numbers even if they had relatively inferior weaponry — matchlocks and ammunition pouches a generation behind that of the British forces, and cannon that, even though larger, couldn’t match the rapid fire of British cannon. And they still had the handful of Frenchmen on their side, trained in artillery in a manner similar to the British. As Siraj’s troops advanced, Clive grew tense. The Siyar describes his state of mind: Clive, committed to the battle, and concerned with this advance and with Mir Jafar and his colleagues still not stirring, whether on account of “his sangfroid or want of strength”, as he had written to Calcutta just four days earlier. It is reported that the Colonel, at sight of this [advance] severely reprimanded some agent, who was then near his person, and said, “that his master had promised and pledged himself, that the troops, as well as the Commanders, were totally alienated from Seradj-ed-doulah; and that as soon as some engagement should take place, they would do his business effectually.” As much as I can see, added the Colonel, the very reverse of all that is taking place. The agent answered, that “those that were now pressing upon him, were those corps that were attached to Seradj-eddoulah; and that whenever these should be vanquished, the Colonel would not fail to see tokens of what he (the agent) had promised. Essentially, Clive was left to deal with the situation as best as he could. And he surely would, the Siyar pronounced with retrospective finality and flourish. “But as the nation of Hat-wearers have no equals in the art of firing their artillery and musquetry with both order and rapidity, there commenced such an incessant rain of balls and bullets, and such a hot endless firing, that the spectators themselves were amazed and confounded,” — the Siyar does too much credit too early to Clive’s forces — “and those in the battle had their hearing deafened by the continual thunder, and their eye-sight dimmed by the endless flashing of the execution”. There is little indication in that descriptive opus of just how hard-pressed the British forces were even with most of Siraj’s army out of the equation, before rain intervened. And a fateful shot.

With permission from PLASSEY — The Battle that Changed the Course of Indian History; Published by Aleph