People at the camp offices of political parties near the poll booths sat without wearing masks, undeterred 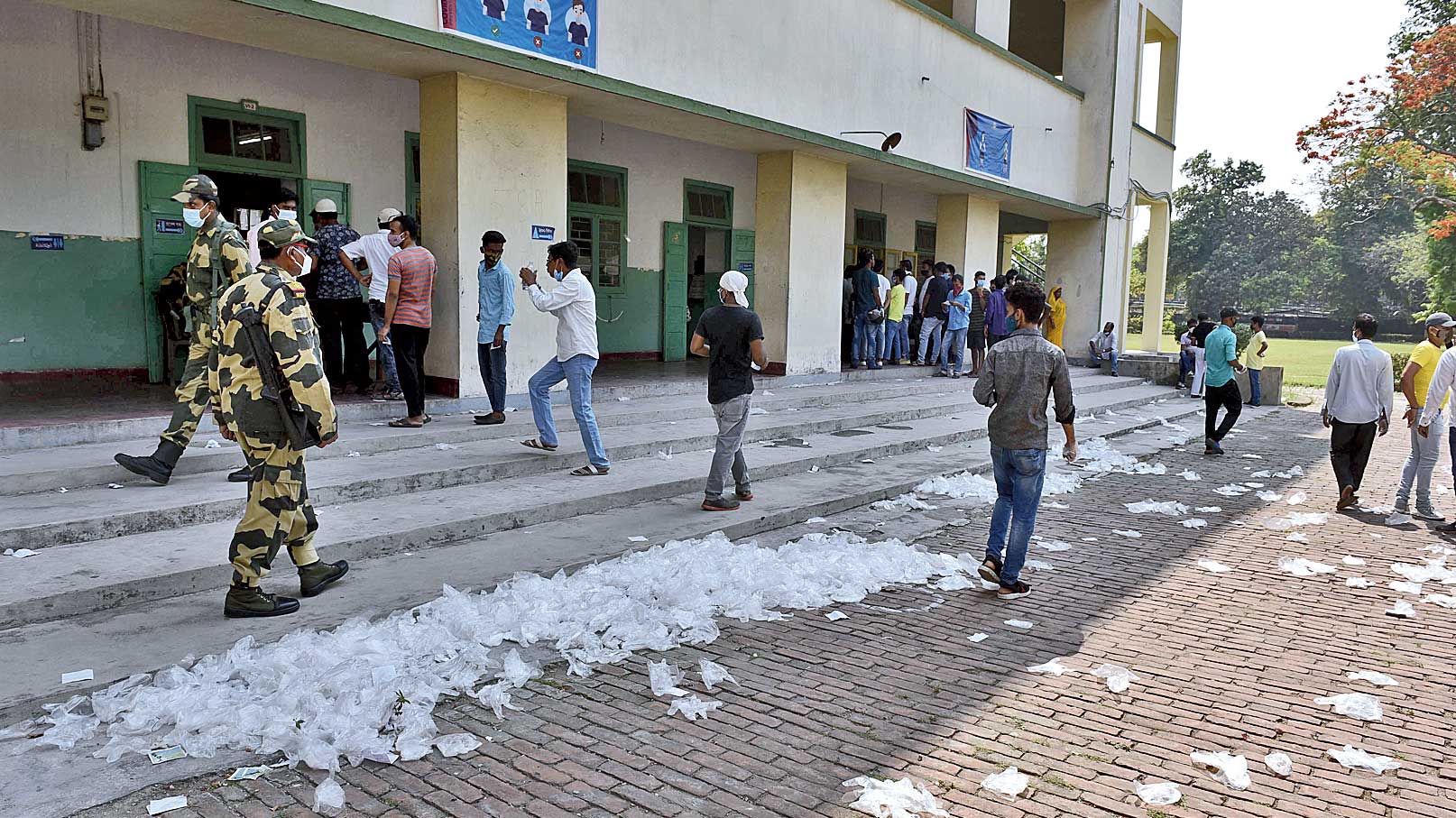 A heap of discarded gloves outside the polling booth at Loreto Convent, Entally, on Thursday afternoon.
Picture by Bishwarup Dutta
Debraj Mitra, Subhankar Chowdhury And Snehal Sengupta   |   Calcutta   |   Published 30.04.21, 02:39 AM

Covid-19 norms were rampantly flouted across the Assembly constituencies in the city that voted in the last leg on Thursday, in keeping with the trend of the previous phases.

There was no semblance of social distancing in the queues outside some polling stations. At some other booths, voters discarded gloves everywhere instead of in the designated yellow bins. Some stations saw both norms being flouted.

People at the camp offices of political parties near the poll booths sat without wearing masks, undeterred.

The previous phases of elections had held up a similar sorry picture. But violation of the norms in the last phase came in the backdrop of the judiciary’s stinging admonition of the Election Commission.

The Madras High Court on Monday held the EC “singularly” responsible for India’s second Covid wave, calling it the “most irresponsible institution” and said its officials might be booked for murder.

The Calcutta High Court had earlier told the EC that its job was not confined to issuing circulars and holding meetings; it had to ensure the implementation of its guidelines during elections held in the pandemic.

On Thursday, a tour of the polling booths across places like Cossipore, Shyampukur, Jorasanko, Beleghata and Entally showed that little had changed on the ground.

Around 9.30am, there were multiple long queues outside the polling station at a girls’ school on Cossipore Road, in the Cossipore-Belgachhia constituency. None of them maintained distancing.

At the entrance to the booth, the queues almost merged into one another and people literally rubbed shoulders with each other.

A handful of jawans and a  couple of woman constables of Calcutta police were stationed at the gates. They were focussed on ensuring that only a few people entered the booths at a time.

At Loreto Convent, Entally, the base of the concrete stairs leading to the polling station seemed to be the designated place for dumping the gloves. Scores of discarded gloves lay strewn there when this newspaper visited the booth.

An Integrated Child Development Services (ICDS) worker distributing the gloves and checking the temperatures of the voters said “there was no bin to dump gloves”.

“We requested polling officials multiple times to arrange for a bin. But as of now, there is none,” she said.

Asked about gloves being dumped at the stairs, a jawan at the booth had a brief response: “Maintaining law and order is our responsibility”.

At another polling station at Raja Manindra College in Shyambazar, one voter after another discarded the gloves on the road outside. A heap of discarded gloves was seen on one corner of the road.

A senior citizen, who came out of the booth around 10.15am, removed his glove and threw it on the road. Minutes later, another woman did the same thing.

This newspaper asked a polling official — who stepped out to take a call — about the violation of Covid-19 protocol and the high court’s observations.

“There is a bin inside the booth. If people are not responsible, then no government can do anything,” he said.

At another polling station at a girls’ school on BK Pal Avenue in Ahiritola, two violations happened simultaneously — social distancing norms went for a toss and gloves were discarded everywhere except in the bins.

Asked why he wasn’t interfering, a central force jawan said it was the responsibility of the Asha workers who distributed the gloves among voters.

Two camp offices, of the BJP and Trinamul, on Brabourne Road, were a few feet apart. On Thursday afternoon, most of the men at both camps did not wear masks.