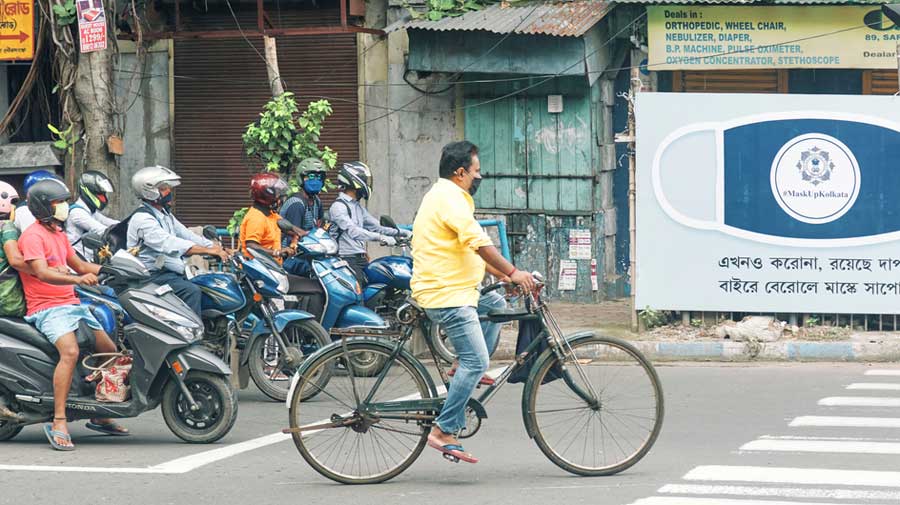 The city police had on June 9 given cyclists this permission based on a decision taken by the state cabinet. The order was in force till August 31.
Shutterstock
Our Special Correspondent   |   Calcutta   |   Published 01.09.20, 02:06 AM

Cyclists will have to follow traffic rules, especially the one-way rule, police said on Monday while extending the permission for free movement of cycles on all roads barring main arterial roads till September 30.

The city police had on June 9 given cyclists this permission based on a decision taken by the state cabinet. The order was in force till August 31.

Anuj Sharma, the city police commissioner, on Monday issued a fresh notification extending the relaxation till September 30 with a reminder to cyclists to follow the one-way and other traffic rules.

Cyclists, according to traffic cops, tend to break the one-way rule. They are often spotted moving in the opposite direction of the traffic flow.

The purpose of allowing cycles on roads barring the arterial ones was for the convenience of hundreds of people who either do not have access to public transport or want to travel alone as a precautionary measure during the pandemic, an officer said.

“We are not prosecuting cyclists for violating traffic rules for the time being. But we always encourage them to use the lanes,” the officer said.

A policeman makes a motorcyclist at the Park Circus seven-point crossing wear a helmet on Monday.
Pradip Sanyal

Several Calcuttans have chosen cycles as their mode of transport during the lockdown. There are some who have stopped using cars and opted for cycles as part of the “new normal”.

“Cycling has been my passion. I took this opportunity to shift to a cycle instead of taking out my four-wheeler during the lockdown. I avoid the main roads and take the parallel lanes to reach my office,” Sudipto Roy, an official at Exide Industries Ltd, said.

He covers around 4km from his south Calcutta home to reach his office.

The city police had on February 13, 2014, issued a notification listing 62 roads where cycles are restricted at stipulated times.

The list hasn’t been changed; which means the restrictions are still there, a traffic police officer said.

The list can be accessed on www.kolkatatrafficpolice.net under Traffic Restrictions.