Advertisement
Home / West-bengal / Calcutta / Swimming pools: Some open, some not

Swimming pools: Some open, some not

There is much excitement among swimmers about getting back into the water, says Debashis Sen 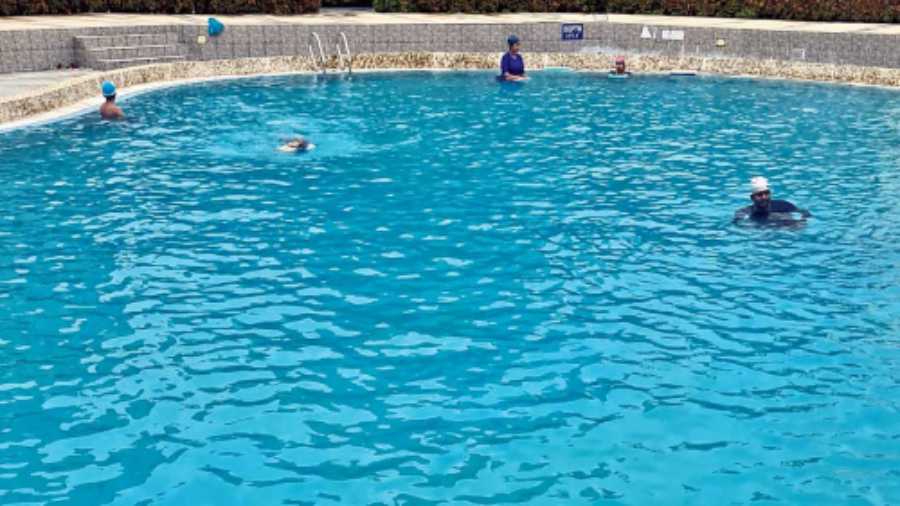 The new relaxations have also allowed swimming pools to open, although not many in our area have done so.

The pool at New Town Business Club opened from Tuesday. “There is much excitement among swimmers about getting back into the water and we had started receiving queries from members even before we got permission to open,” said Debashis Sen, managing director of Housing and Infrastructure Development Corporation (Hidco), that is in charge of the club.

The pool is allowing only those members who have received both doses of a Covid-19 vaccine and the time slots are being divided in a way to ensure not more than 50 per cent occupancy at any time.

The pool had opened earlier this year for a short while before it was forced to shut again for the restrictions. So there are people who had paid membership fees for the entire swimming season till around the Pujas but lost out on some months. “We shall look into the issue and adjust it as per the situation,” said Sen.

Salt Lake’s oldest pool reopened on Thursday. The pool had been maintained and the water kept chlorinated all through the period of restriction since May 1 so the authorities say they did not have to prepare much for the re-opening.

Existing members can start swimming right away as can the seasonal members who had enrolled in April. A decision will be taken on whether more seasonal membership forms will be given out or not, given far fewer than the usual numbers have registered. The season usually ends on September 30. Since the pool had to be shut for so long in between, a decision will also be taken on whether the season will be extended into October till the start of the Pujas.

In Salt Lake, however, the two swimming pools run by the Bidhannagar Municipal Corporation are likely to remain shut till the end of the year, an official of the civic body said.

“There are still beds, an observation centre and oxygen cylinders on the pool’s premises and we have not received orders from the health department to move them out,” said the official.

According to him, the entire pool complex needs to get sanitised before it can be opened to the public and no such thing has been done. “We have not received any instruction to open the pools yet. As it is, the pools shut down by October-end and it makes little sense to open them now as people too would be wary to step into the water,” another official said.

Krishna Chakraborty, chairperson of the Bidhannagar Municipal Corporation's board of administrators, said that they would hold a meeting and decide whether to open the pools this year.