'We decided to tie rakhi on our mangrove plants as we think of them as our brothers, who will protect us from danger' 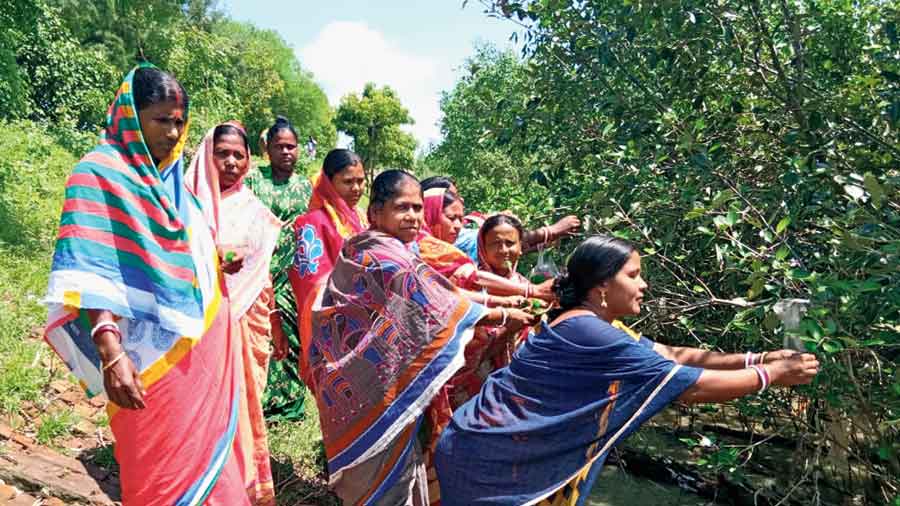 A group of women in the Sunderbans on Sunday tied rakhis on mangrove trees vowing to protect them in the hope that they would in turn get protected from the vagaries of nature such as cyclones.

Aparna Dhara, from Lakshmipur village of Kakdwip block, and fellow members of Lakshmisree Self Help Group got up early to celebrate rakhi in a unique way.

“We decided to tie rakhi on our mangrove plants as we think of them as our brothers, who will protect us from danger, just as our brothers do,” said Aparna.

At Lakshmipur village, mangrove plants had been planted across 200 hectares. The area has since increased to 750 hectares.

“This year again 10 hectares of mangrove plantation has been done at the village,” said Ajanta De of News, Environment and Wildlife Society (NEWS), an NGO involved in mangrove replantation in the Sunderbans.

“We started planting mangrove seeds in 2013 under the leadership of NEWS. Today, we have been able to reduce soil erosion by the river to a large extent. The river erosion was not much during both Cyclone Amphan (in 2020) and Cyclone Yaas (in 2021). Most of our houses were protected,” said Aparna.

“These plants protected us during Amphan and Yash. We have vowed to protect them, too,” said Rupa Samaddar of Nikarighata.

“Villagers play an active role in protecting mangroves. Women of Self Help Groups take turns to guard the mangrove saplings, shooing away anyone trying to harm them. They alert the panchayats if anyone uproots trees. They have realised that to survive in the Sunderbans, they have to protect the mangroves,” said Ajanta De of News.