Students bring wetlands to the city

An exhibition set up by them wants to “forge new connections, to dismantle the invisible walls that separate the city from the wetlands” 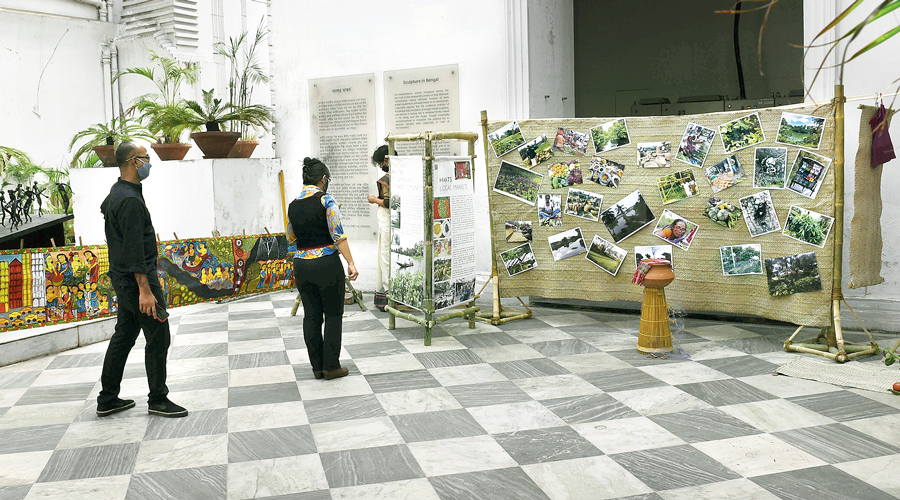 The daily haat, an integral part of the wetland landscape. On the pin-up, at the Jolabhumi’r Kotha o Kahini (Tales from the wetlands) exhibition at Currency Building in Dalhousie, are photos of shop layouts, people selling their wares and their every day lives.
Bishwarup Dutta
Debraj Mitra   |   Calcutta   |   Published 31.01.21, 01:04 AM

A great view from apartment balconies and a source of cheap vegetables, the wetlands to the east of Calcutta occupy a limited space in the minds of its people.

An exhibition set up by students wants to change that. It wants to “forge new connections, to dismantle the invisible walls that separate the city from the wetlands”.

A “waste map” is one of the displays at the two-day exhibition that started on Saturday. It tracks the journey of sewage from a visitor’s home to a natural wastewater treatment plant. Another exhibit asks a visitor to pick ingredients for a Bengali dish and then trace their source to the same ecosystem.

Titled “Jolabhumi’r Kotha o Kahini (Tales from the wetlands): an anthology of encounters”, the exhibition at Currency Building in Dalhousie is centred on the East Calcutta Wetlands.

Visitors interact with the “waste map” that tracks how the city’s sewage flows through major collection points into the East Calcutta Wetlands network.
Bishwarup Dutta

The wetlands receive and treat a bulk of Calcutta’s sewage every day and has saved crores of rupees for the administration by sparing the need to build several sewage treatment plants.

The wetlands, declared a Ramsar site in 2002, provide livelihood opportunities to a large number of people in and around Calcutta through the production of fish and vegetables. Over 10,000 tonnes of fish is produced there every year and around 150 tonnes of vegetables every day.

The sewage-fed aquaculture is also a massive carbon sink that removes carbon dioxide and protects climate at a regional scale.

Artwork made by students of Bamanghata and Kheadaha high schools in the East Calcutta Wetlands.
Bishwarup Dutta

“We want to take the wetlands to the people of Calcutta. The city should know where a bulk of its food comes from; what is the destination of its filth beyond the canals that slither through its neighbourhoods,” said Rishith Sinha, a student of economics in Reed College in the US.

The exhibition, curated by an artists’ collective that works closely with children, also shows how rapid changes are taking place at the 12,500-hectare of water bodies known as the city’s kidneys at the cost of the rich biodiversity there.

Human settlements have come up after filling the water bodies. The threat of construction and dumping of waste looms large over the wetlands.

Upcycled products made by students of Bamanghata and Kheadaha high schools in the East Calcutta Wetlands. The products are made from inorganic waste dumped in the wetlands. The bag is made of discarded newspapers. The red box is a portable lamp made with LED bulbs fitted into a plastic box.
Bishwarup Dutta

On December 22, the National Green Tribunal asked an expert committee to complete the assessment of environmental damage within the East Calcutta Wetlands because of the “unauthorised and indiscriminate disposal of solid waste” by the Bidhannagar Municipal Corporation within another two months.

On the inaugural day of the exhibition, the “What’s Cooking” installation drew many visitors. Each one was asked to pick raw materials to rustle up a dish. A fish curry with seasonal vegetables was a common dish that many opted for. Each visitor was shown which of the ingredients had been sourced from the wetlands.

Another installation showed glimpses of the daily haat, an integral part of the wetland landscape. Photos of shop layouts and the people selling their wares adorned a wall made of bamboo and woven mats.

A “net of stories” of the people, practices and images from the wetlands.
Bishwarup Dutta

A bunch of 10 students, including Sinha have set up the installations.

Mentored by members of Disappearing Dialogues, “a dynamic platform for creative engagement and cultural expression”, the students went to the wetlands many times for a ground experience and to prepare for the exhibition. “We want to stoke responses and trigger conversations about the wetlands,” said Nabina Gupta, founder of Disappearing Dialogues.

A “reimagined Calcutta of the future” where waste is thoughtlessly generated and discarded by its urban populace.
Bishwarup Dutta

“The exhibition is a call to look at the wetlands as they are — neither paradise, nor wasteland, but an evolving socio-spatial, sonic, and geographic landscape. Its people are diverse, its practices myriad and mutative. The exhibits are meant to prompt thoughts and questions, to ignite our curiosity about the wetlands,” says the curatorial note.