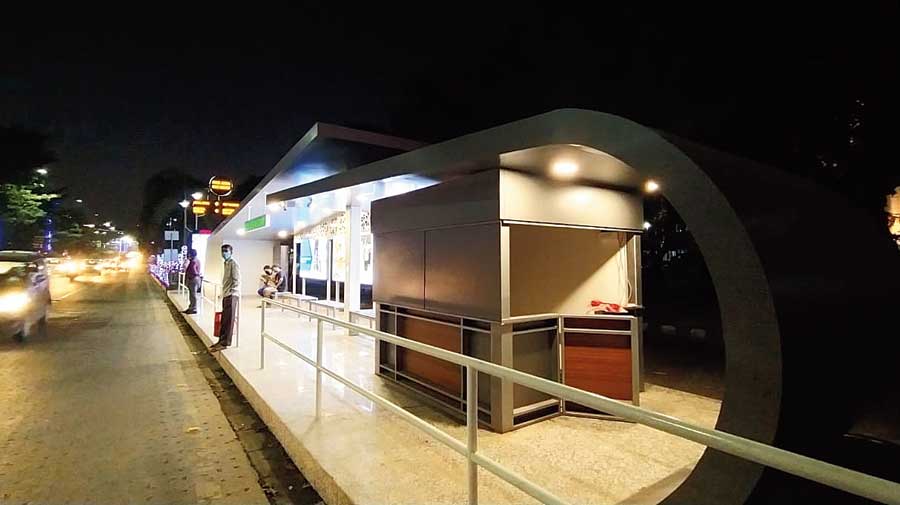 A Wi-Fi-enabled bus stand that will let commuters know the expected time of arrival of the next bus, it's route and when it is likely to reach the final destination has come up in front of the Coal India building in New Town.

The bus stop on the Major Arterial Road, which will be functional from November 5, also has a counter that will sell snacks and function as a night cafe and a newspaper stand so that the stretch does not become desolate after sundown like many other streets of New Town.

Two brightly lit electronic display boards at each end of the bus stop will give information about the buses at regular intervals, like the flight information boards do at the airport terminal, said an official of Hidco, the agency that built the bus stop.

Apart from timings, the boards will mention the route of every bus that arrives so that even those who are new to the city can board a bus with ease.

A map of the area around the bus stop with a prominent marker displaying the exact location of the bus stop is also there so that those who get off buses can walk to their destinations easily.

One of the display boards at the bus stop.
Telegraph picture

Most of the new-age buses in the transport department's fleet have GPS-based live tracking units. Based on the data of real-time movement of these buses, a software will generate information for use at a particular bus stop, a Hidco official said.

This software takes into account the travel time of a bus on a particular route, the nature of traffic congestion at various times and correlates the data to the real-time movement of the bus to work out an estimated time of arrival at a particular stop.

Debashis Sen, the chairman and managing director of Hidco, said the idea was to have a "smart" bus stand that not only let people know when the next bus was due to arrive but also served as a hangout zone.

"While it will provide an opportunity for income generation... commuters, especially women, will feel safe at night as it is brightly lit and will have people around," said Sen.

The decision to have a bus stop with a cafe was taken as many areas in New Town turn desolate and lonely as night sets in, said an official of Hidco, which builds infrastructure in New Town.

Metro has reported how the New Town authorities were banking on cafes and eateries to make the township livelier and safer, particularly for women at night.

A large number of people working in the IT sector in New Town are women. According to a report submitted by a team from IIT Kharagpur to the New Town Kolkata Development Authority (NKDA), women feel unsafe while returning home at night simply because the streets turn empty.