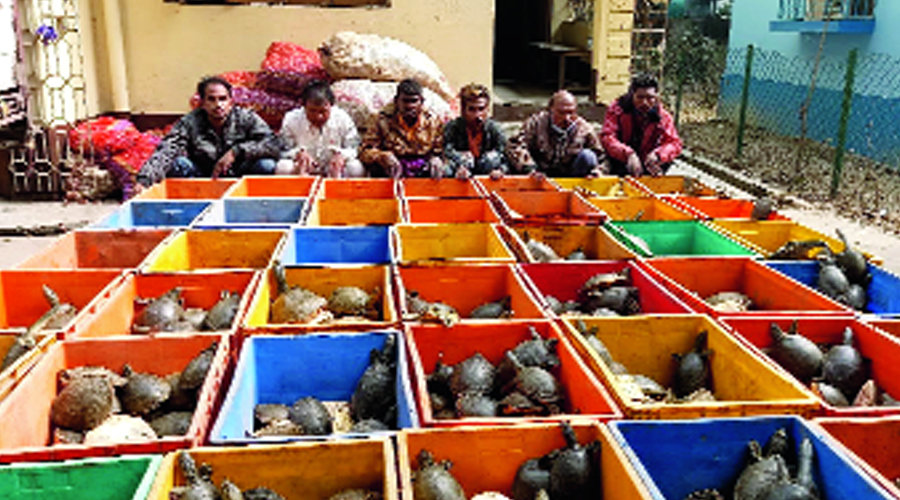 Around 1,500 dead and live turtles, stacked in jute sacks and being ferried with onions, were seized from a pickup van in Barasat in North 24Parganas on Wednesday morning. Six men have been arrested.

The seizure is the latest in a series of turtle hauls around Calcutta in the past few years. Like in most previous cases, the turtles seized on Wednesday had been caught in Uttar Pradesh, said forest officials.

The pickup van had an Uttar Pradesh number plate. All six accused are from Sultanpur in UP. Stuffed in sacks on such a long journey, many turtles had suffocated to death.

Both species are protected under Schedule I of the Wildlife Protection Act. Killing them can lead to a jail term of three to seven years.

“The turtles were hidden under jute sacks stuffed with onions. Based on a tipoff, the van was intercepted near the Dak Bungalow intersection around 9am,” said a forest officer.

The operation was conducted jointly by the forest department and the Wildlife Crime Control Bureau.

“The turtles were caught from Sultanpur in UP and were headed towards Bangladesh, via the Bongaon border,” said V.K. Yadav, the chief wildlife warden of Bengal. “They will be released in an oxbow lake off the Ganga in Purbasthali, in East Burdwan, a popular destination for migratory birds.”

Turtle meat is a delicacy in Bangladesh, said a forest official. It is also sold on the sly in markets in Gaighata, Bon¬gaon, Habra and some other places in North 24 Parganas and some areas in South 24Parganas, according to foresters and wildlife activists.

The Gangetic basin of Uttar Pradesh and Bihar are rich in turtles. “Winter, when the water level goes down, is the time to catch turtles from river basins,” an official said.